Yes, I was busy

Just because I wasn't blogging here doesn't mean I wasn't doing hobby stuff. In fact, I was really getting after some sets I had been considering for a long time. They were all football sets and that was one reason I wasn't motivated to post. Not much interest in vintage football in the blogging world.

But I decided that I'd throw some stuff up here just because. I nabbed some oddball baseball sets as well and maybe they will find themselves here, too.

I posted some of the '71 Topps football set last year. I finished it off a few months ago with some COMC pickups. It's a fun set with the obvious colorful 1975T baseball set vibe going. The majority of the set is comprised of posed training field 'action' shots like Joe Willie here. 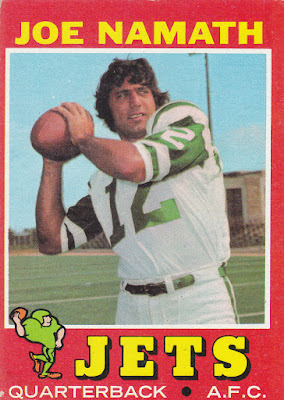 For the most part, the rest of the set consists of portraits. Many of them are practice field shots as well like this one of fellow Hall of Famer Paul Warfield, who will always be a Cleveland Brown in my mind. Some portraits were just cropped into headshots. 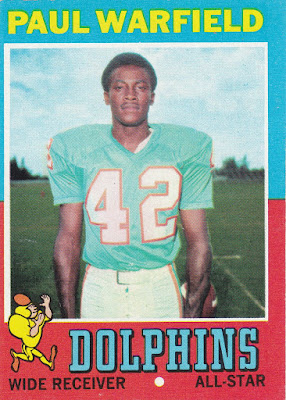 There is a sprinkling of game action shots. Dennis Shaw is one. Like everyone else seen in this set wearing a helmet, his is airbrushed. 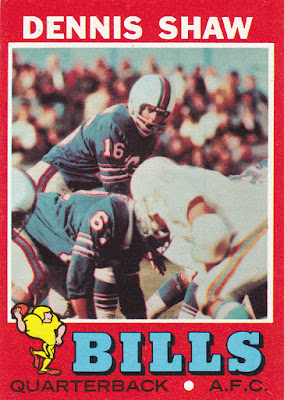 Joe Greene's rookie card is the most expensive (and one of the least interesting) cards. But it's by no means hard to find. It was the last card I picked up for this bunch because I took my time to find one with the right balance of affordability and condition. 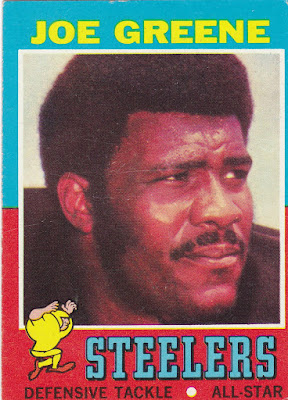 I pulled a random page to show off the colors and variety. AFC guys with red borders, NFC got blue. And the All-Stars got the combo treatment which really foreshadowed the '75 baseball set. 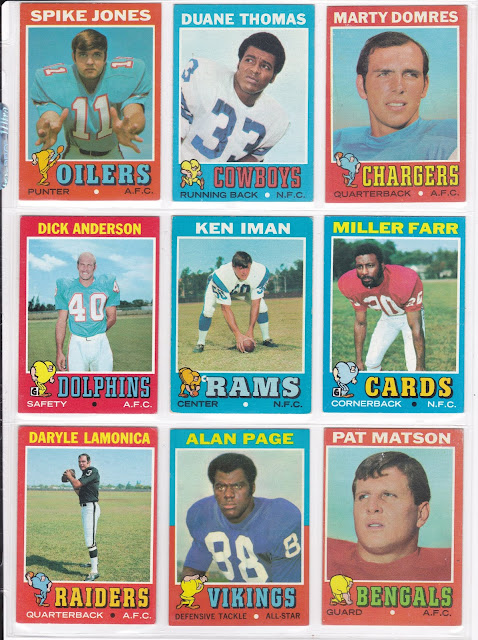 Kind of an interesting page there as I look at it. Alan Page has his game face on for sure. He is among the best defensive players I've ever seen. Spike Jones is not related to the 40s-era comedian and bandleader of the same name. But he does share the nickname. Duane Thomas was a real talent in the early 70s. His Wikipedia page is worth scrolling thru. Daryle Lamonica was known as the 'The Mad Bomber'. I always think of my childhood friend who called him Daryle Harmonica. It's no funnier now than it was then.

And finally, there is Dick Anderson. He was a Pro Bowl level corner for a decade in Miami. He also sent a dagger through my heart in the 1971 AFC title game when he found a Johnny U pass in his arms and took it back 60+ yards for a soul-crushing score. Almost 50 years later and I'm still not sure I've ever recovered.

Because I like torturing myself I dug up (several) videos of the play on YouTube. The one below is in black and white but it features the NBC call by Curt Gowdy that still haunts me. Curt, of course, was an AFL guy and that came through in every broadcast. In this one, he all but explodes with joy. Funny thing, I never resented Gowdy. He was a fantastic broadcaster. I could stand watching more than I had to of this tape but it appears to be Curt's own analysis of the play from some sort of TV show. Whatever.


So that's the '71 Topps set. I have several more vintage sets complete. A couple have a few empty slots and are awaiting my COMC delivery scheduled for Tuesday.  I hope a few folks are interested in them because I'm going to keep posting 'em whether you like it or not. 😉😄
Posted by Commishbob at 10:42 AM