The Leafs Are In The Bag

There seems to be a point in all of my set chases where I say to myself: "Self, why on earth did you decide to collect this damn thing?" Usually, it's when I'm frustrated with a star card that has eluded me for a while. In the case of the 1960 Leaf set...well, it's hard to point to that one moment. But I can tell you what was behind it...lack of homework.

Don't get me wrong…I love this thing. But there were a few times that I was tempted to pack it in and admit defeat. The 'high numbers' (can cards #'d 73 to 144 really be called high numbers?) are a pain to find and a pain in the wallet when you do find them. I quickly determined that any of the high numbers priced below $20 were a bargain. I grabbed any I could. Some came cheap, as low as $8 if I got lucky. Others ended up costing me closer to $30. Had I looked harder at the set before I was committed to it, I may have bailed. But I stuck with it.

You can read all the particulars of this quirky thing over on the SCD website if you want to. Over here, I'm celebrating finishing it! And an interesting finish it was. A month or two back I returned from one of my extended breaks from the chase and dug into eBay. I found a seller with a bunch of these up for auction. I bid on all I needed but only won one of them.

The day after those auctions closed I found a dealer with a stack of these things, and at reasonable prices. Plus, and sweet Jesus this was great, he was accepting offers. I jumped in and nabbed several at better prices than I had seen in the past. Between those purchases, my eBay win, a BIN or two and a COMC delivery I went from lacking 15ish to needing just four or five. A nice chunk of the haul came in one day: 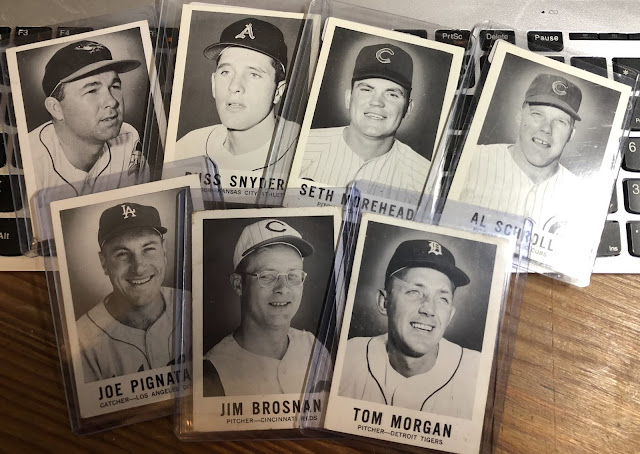 Inspired by my new gems, a trip back to COMC turned up a Gene Green card and into my basket it went. Then an eBay search led me to this one and even with the 'Yankee tax' I couldn't complain too much. 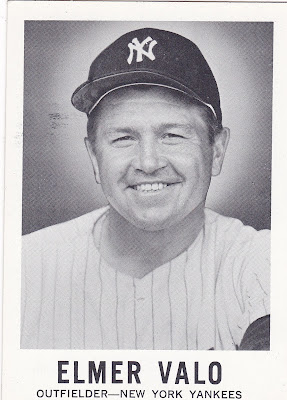 Meanwhile, I had posted the photo of my 'big delivery haul' on Twitter and something amazing happened. Talmer Curry, an Orioles/Ravens fan who I had never interacted with, reached out to me with word that he had some '60 Leaf high numbers and asked what I needed. Wait, what?

I messaged him back with my needs and low and behold, Talmer asked for my address so he could knock two real toughies off my list! Here's one... 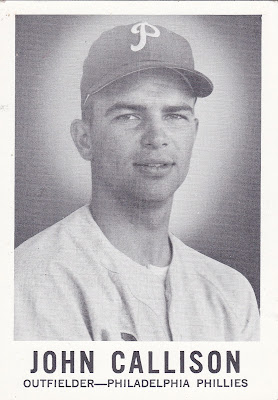 I think that in all the time I had been working on this set I'd only seen one Johnny Callison on eBay and I remember that I was outbid, by a lot. And now here I had this card through the generosity of a stranger. And then there is this other one Talmer sent... 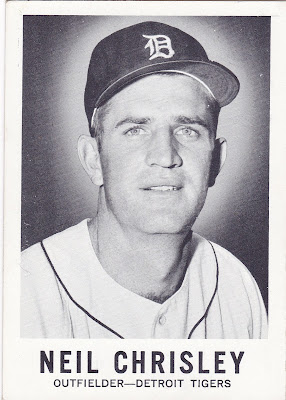 His given name is Barbra O'Neil Chrisley but whatever it is I'm damn sure happy to slide him into one of the last open slots in my binder. Mr. Chrisley is rarely available in the usual places. But he's mine now.

And so it came down to this guy(s). The Two Smiths is another rare one, or at least it seemed to me to be next-to-impossible to find at anything approaching a reasonable price. But I did another in a long line of eBay searches for it and found one that had one low bid at the time. Figuring there was no way it would stay that way I stuck a snipe on it for $60. That's more than a reasonable man should pay for it but I'm rarely reasonable. And I won the last 1960 Leaf I needed for less than $16. 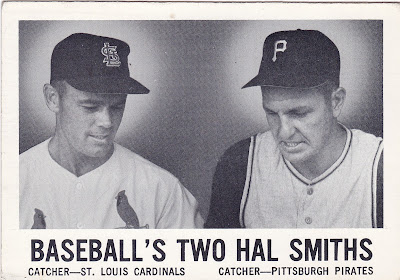 It is a pretty neat card actually. Here's a look at how the back differs from the standard ones. 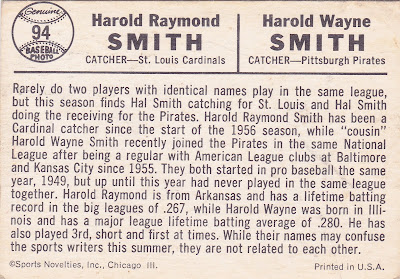 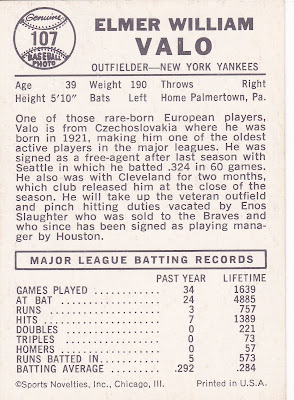 So that's a wrap. I'll post some others here as I get the chance. There are very few 'stars' but a lot of these guys have fun baseball stories to tell. And some of the cards in my binder do as well. Like my Curt Flood card. The only one I saw for a couple of years is still sitting there on COMC with a $130 price tag. It's not even graded. If I was going to quit on this set I figured it the Flood card was going to do it. But I ended up nabbing a real beauty of a Flood for 1/10th that price.

Little victories like that, and being the recipient of generous gifts like the one from Talmer Curry, make this hobby such fun.

I'm done with this one but not 'finished'. For one thing, I have the Gene Green card at COMC and when I last looked my purchases had a late June expected shipment date. I'm fine with that. It's only cardboard and the folks there have bigger fish to fry, like trying to stay safe while working. My cards will get here when they get here.

And if you read that SCD entry you'll see that there are a couple of variations that I may or may not decide to track down at some point. There are also some prototypes floating around, but they are far out of my range. And finally, there are a couple of cards I would like to upgrade. I have one of two of those on the way already.

But the bottom line is that I have met my goal. I have a set or two on the horizon but I think I'll just sit back for a bit and savor this one.