A Thing of Beauty

Most of the sets I collect appeal to me for nostalgic reasons, i.e. I collected the cards as a kid and they bring back memories of that time.

This is not one of those sets. I decided to collect the 1961 Fleer football set for one reason alone...it's flat out awesome. I have no recollection of having seen these things back in the day. I collected baseball starting around 1959 but the first football cards I remember having are the '63 Topps cards and the Philly Gum sets circa 1964.

But I've owned the Baltimore Colts from this set for a long time and the Lenny Moore card has always been one of my favorites from any set. You can see my post on this card by clicking here. And my look at the Colts in this set (and how they compare to the '61 Topps cards) is available by going here. 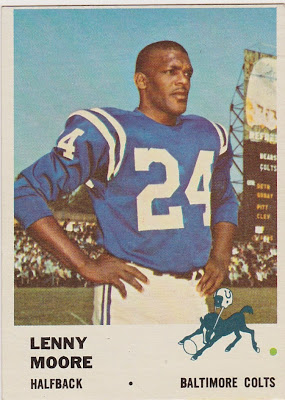 I think the set is beautiful in its simplicity. It was issued in two series, one for the NFL teams and the other of the AFL bunch. SCD has the background details in a story from 2017. I'm just going to throw some cards up here and comment on them. 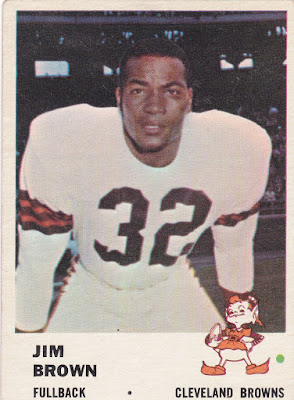 That's not Jim Brown's best card but it's not his worst either. Bonus points for Brownie. The use of the cartoon-style logos, official or otherwise, is one of the set's charms.

At the TriStar show earlier this year I found myself with my needs list, sitting at a dealer's table leafing through a binder of these things. At that point, I was probably 40 or so short IIRC. When the guy saw what I was looking at he flipped out and went on and on about how much he loved this set, how beautiful he thought it looked in a binder (my kind of guy, obviously). He told me that it was the one set he had built in graded AND raw form.

I made big strides at that table and one other towards finishing this thing off. I can't remember exactly but I was down to needing less than a dozen when I walked out. As of this post, I still lack three, all rookies...Don Meredith, Tom Flores, and Johnny Robinson. I'm going to be patient with them as I've found some of the others pop up as bargains from time to time. 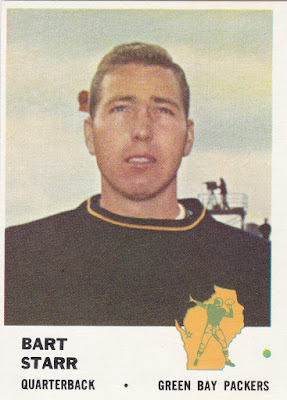 Whatever that is on the left side of  Bart Starr's head is part of the photo, not a flaw on the card's surface. And I didn't notice right away but the logo has Wisconsin flipped in the wrong direction. The logo on the back is the same way.

Speaking of the backs. They are simple, they are pale green on cream, they tend to fade, and the numbers seem to disappear on a lot of them. In other words, they suck. The back of the Don Joyce card is an example of a back that has survived without much fading. The Paul Maguire card back, on the other hand, is a pretty good example of what you'll find with the lower condition cards. Most of my set is somewhere in between. You'll also find that a lot of the cards are warped and a certain number are cut short top-to-bottom. I thought they might be trimmed but I believe it's just how they were cut at the factory. 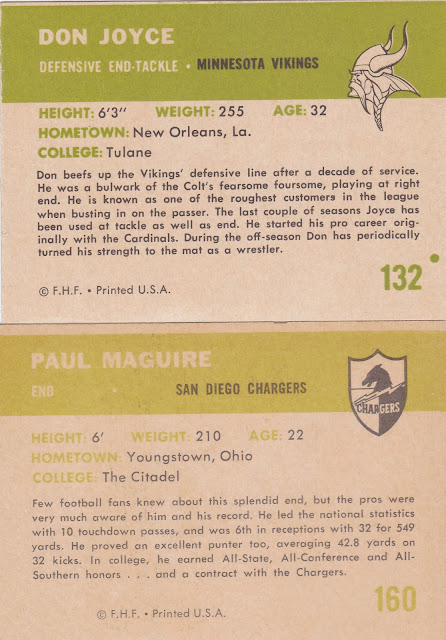 The Oilers played their early games at what was then called Jeppesen Stadium on/next to the University of Houston campus. They practiced on fields that later became part of UH's recreation and intramural programs that I was heavily involved in through the early '80s. Those buildings in the background were across Scott Street from campus and were around when I worked there and some may still be. 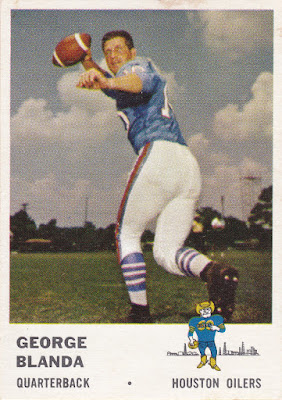 The Titans played in the Polo Grounds before they became the Jets. Here's the guy who would become Joe Willie's favorite target in his navy and gold. 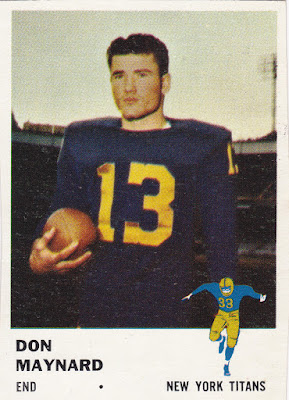 My guy, Tommy McDonald. This card doesn't match the rest of the Eagles in the set which is a bit odd considering he was in his fourth year with them. One of the neat things about the set is that so many cards within each team grouping 'match' in terms of background, style of photo, poses, or all three. More on that below. 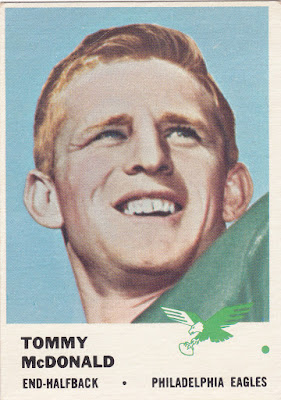 I found a signed Paul Hornung. The sig is kind of faint but it's there. I gravitate to 'all-purpose' players like Hornung, Lenny Moore, Gale Sayers, etc and I collect a lot of their cards. 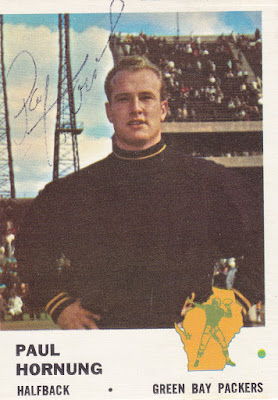 Here's former US Congressman, HUD Secretary, and 1988 presidential hopeful Jack Kemp. It's his rookie card and one of the pricier ones in the set. 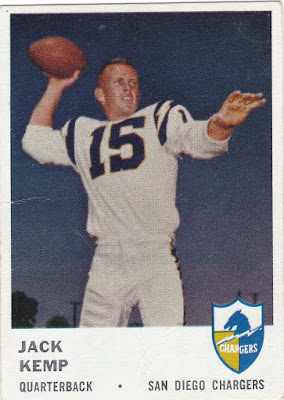 The great Ray Berry. His pose, hands-on-hips at Memorial Stadium, is very much like that of Lenny Moore. 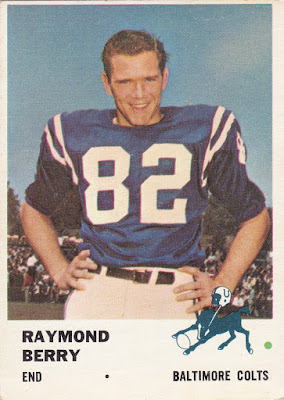 The Bears are the first team in the checklist, which is arranged using team nicknames alphabetically. They have nine cards in the set so it makes a perfect example of 'matching' cards within a team subset. This is Memorial Stadium in Baltimore, so I'd venture a guess they were photographed before the Colts-Bears game there in 1960. Colts won that one on a Johnny U to Lenny Moore TD pass late. Their second scoring hookup of the game. 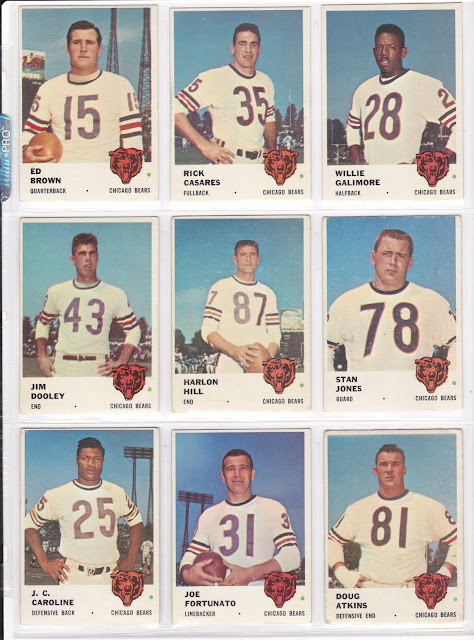 A page of Chargers (with a Bronco sneaking in) shows that some Fleer photogs switched things up just a bit with their poses. 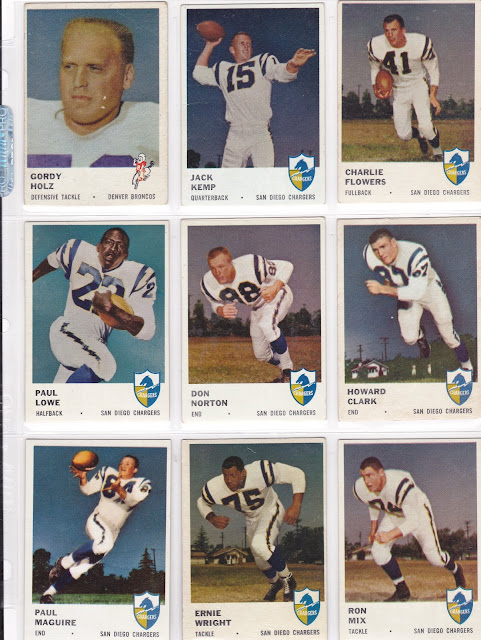 The Giants cards get that terrific Yankee Stadium-based logo. I know that some don't like the fact that a team nicknamed 'Big Blue' uses so much red but I gotta tell ya, these unis (and therefore cards) are fantastic. I love the Robustelli card. It's easy to imagine the photographer yelling 'Hey, Andy!' and snapping when Robostelli turned from the group of players he was standing with. 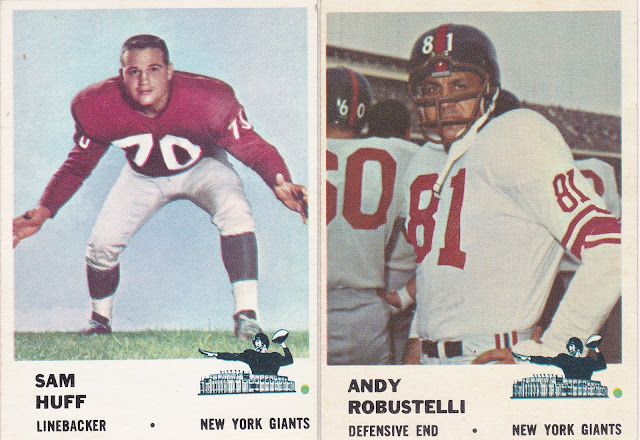 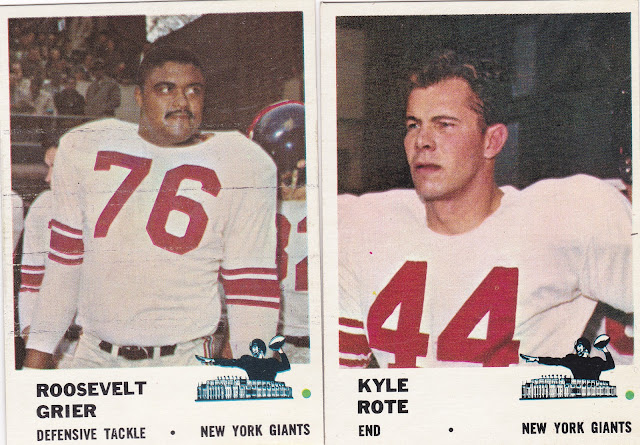 The Eagles were, for the most part, pictured in Franklin Field where they played back then. The stadium is on Penn's campus and still in use today. UPenn Quaker football, concerts, and the Penn Relays are regular occupants. 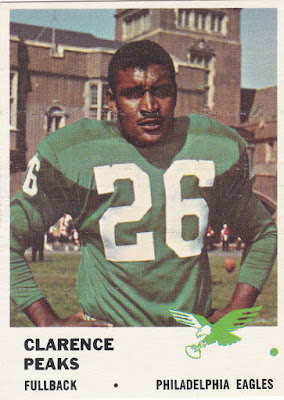 The fieldhouse in the background is distinctive. 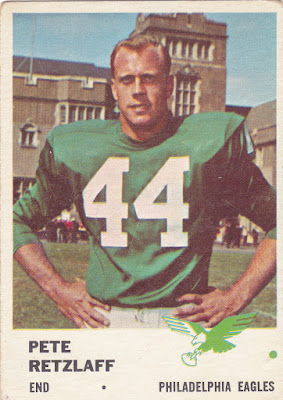 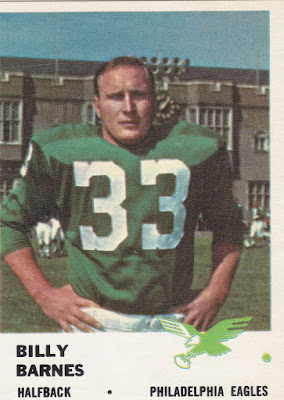 Still looks about the same, yes? 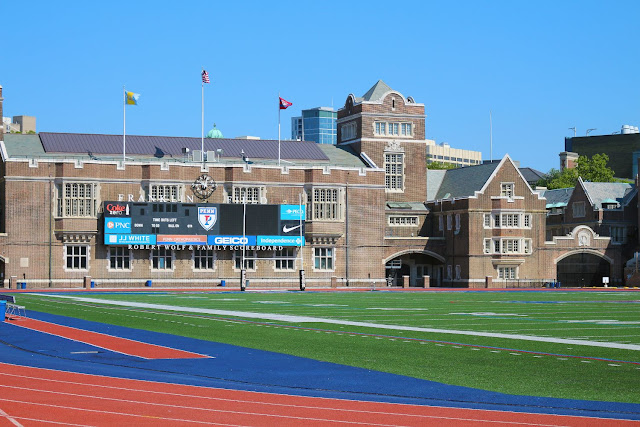 Cowboys got their pics taken at Yankee Stadium. The date was December 4 of 1960 and the Cowboys tied the Giants, 31-31. It was the only game that they did not lose during that initial season for the club. The Giants, meanwhile, went 1-3-2 at home and Jim Lee Howell was canned. 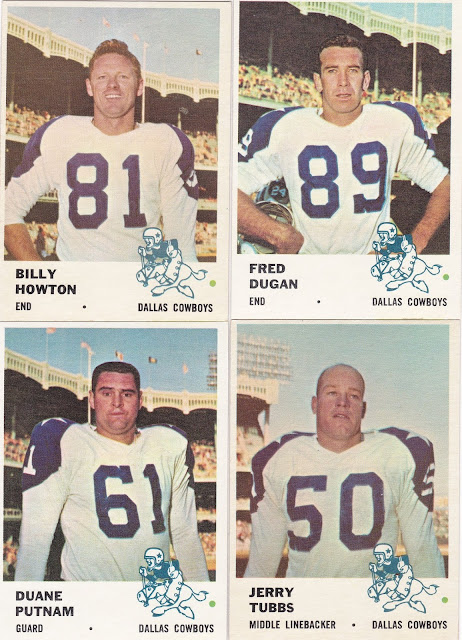 1961 was the first season for the Minnesota Vikings and Fleer made cards of seven players who had been photographed the year before. Like former Colt Don Joyce. 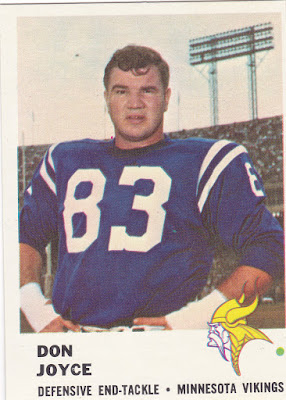 Finishing up with an interesting card. Randy Duncan was one of the best college players you've never heard of. At Iowa in the late 50s, he was Big Ten MVP, Walter Camp Award winner, Heisman runner-up and led the Hawkeyes to consecutive Rose Bowl wins. He was drafted by the Packers as the first pick in the 1959 draft but opted to play in Canada. The BC Lions offered him a better contract. Oh, how times have changed.

After two seasons he returned to the States and was signed by the AFL's Dallas Texans. He started two games for the '61 Texans and retired after that one season after Hank Stram drafted Len Dawson. He returned to his other love and finished law school at SMU. He's in the College Football Hall of Fame.

This card is very different from the rest of the Texans' cards and I decided to poke around on the web. 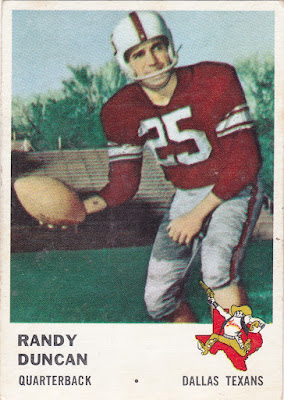 Sure enough, I found this photo of Duncan from his days at Iowa. 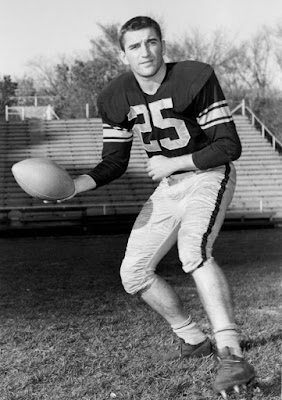 My first thought was that Fleer had painted a helmet on him (in addition to obviously colorizing the uni in Texan's red/white) but I noticed that his left arm is in a different position. And the barely visible numbers on the side of his helmet match Iowa's helmets exactly. If  Fleer had created the helmet artistically they wouldn't have used those numbers I don't believe.

More likely is that the photographers at Iowa's picture day had players pose with and without helmets, etc.

Well, so much for that little side trip down a rabbit hole.

To paraphrase Bum Phillips on Earl Campbell...the 1961 Fleer set may not be in a class by itself but it damn sure doesn't take long to take roll.
Posted by Commishbob at 7:11 PM