Well, this is discouraging. I had this post completed on my iPad with the Blogger Pro app and I come over here to post it and boom, it's gone except for most of the images. OK, I'll re-do it here since I don't trust that app anymore.


I was gifted with a package from Joe Shlabotnik last week, the second one he's sent in less than a month. The star this time was this 1971 Lou Brock. Perfect card? Nope. But it fits perfectly into my set build. 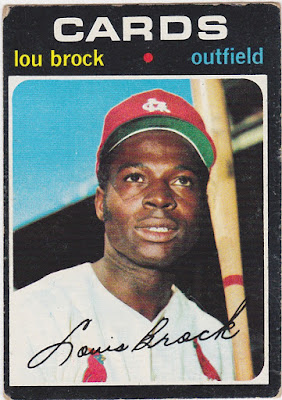 I can't think of Lou Brock without thinking of his semi-famous 'invention', the Brockabrella. 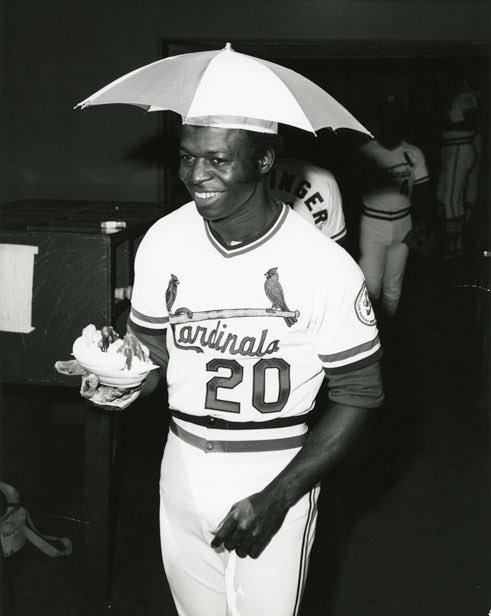 I actually wore one of those once thanks to my friend Sam whose Cardinals love runs very, very deep. I'm jealous of that ice cream Sundae that Lou is about to enjoy. I wonder if it came from Ted Drewes.

The Brockabrella appeared in the 1984 Fleer set. I've put that card at the bottom of this post. BTW...Joe also included another '71, Al Fitzmorris, but that image went 'poof' and I don't think I need to go dig it up from my files. Brock can rep the set without any help for sure.

This next card is a Heritage Hi# SP (or so I'm told). So it's as rare as Orioles wins in Minute Maid Park. But unlike watching the O's lose I can get some use out of this baby. It's going in my fantasy player binder. 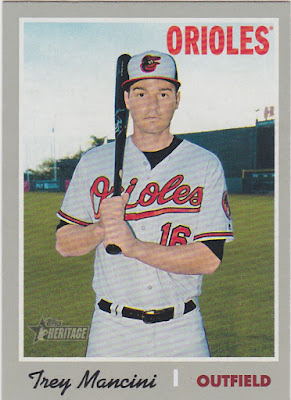 As is his want, Joe sent along a stack of Orioles from sets gone by, mostly from the 90s and 2000s. 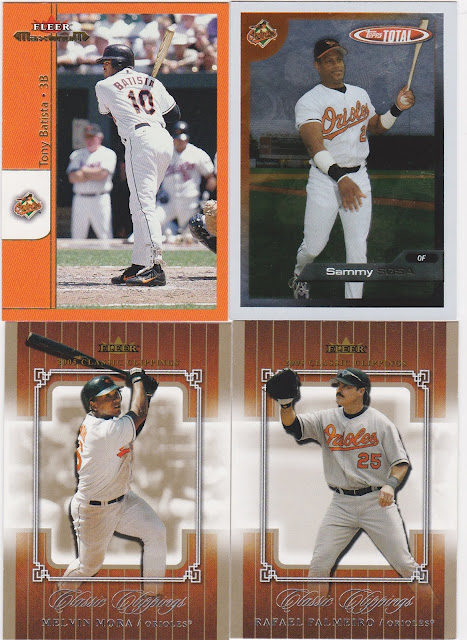 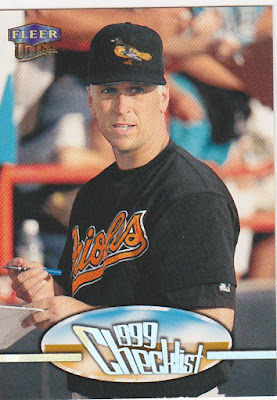 Arthur Rhodes bulked up a bit as his career evolved. He looks almost slim here. Eric Davis had a short (two season) tenue in Birdland as he made his comeback from his cancer fight. Unfortunately for me, it came at a low ebb in my baseball fandom. 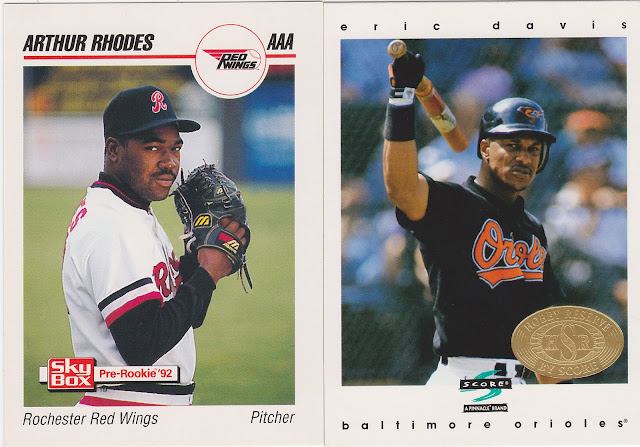 Andrew Cashner has had for bright (and not so bright) moment for the O's this year. He was beaten up on Opening Day when I saw him pitch at Yankee Stadium. He was much better Saturday night here in Houston against a depleted Astros team. 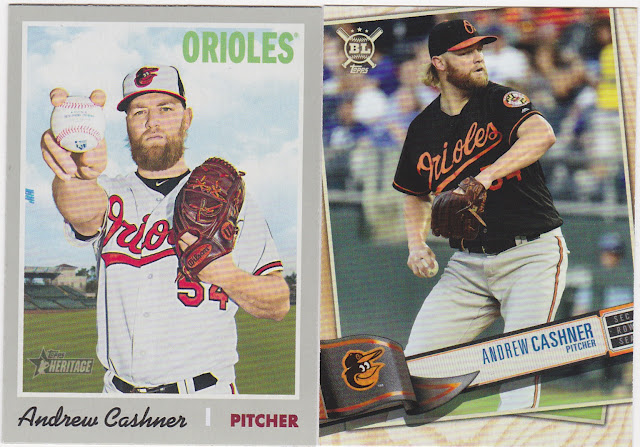 Mancini had a lousy weekend against Astros pitching. But I'm glad to have this card. I don't fully understand what the purpose of  Topps' Opening Day set. Seems pointless. 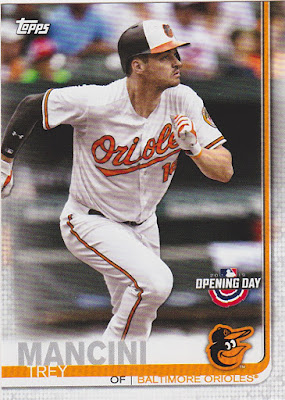 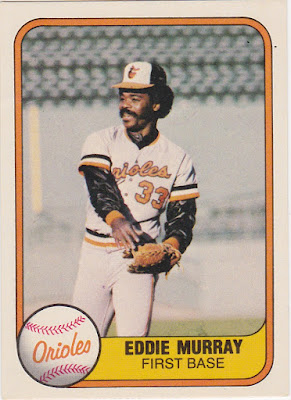 I don't think I had this Drake's Murray. When I delivered the Newark Evening News in Nutley, NJ back in the day a package of Drake's Yankee Doodles and an RC Cola was the usual post-route treat. 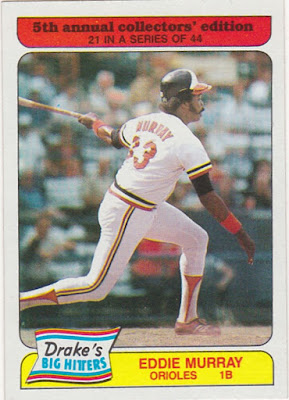 Union Craft Brewing in B-more is producing a beer they call Steady Eddie. I'd love to give it a try, or at least grab a can to display. 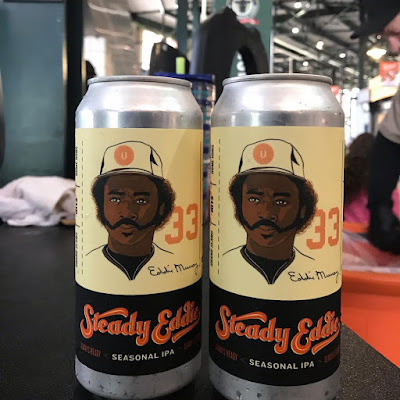 Mike Mussina..welcome to the Hall of Fame! I hold no grudges. 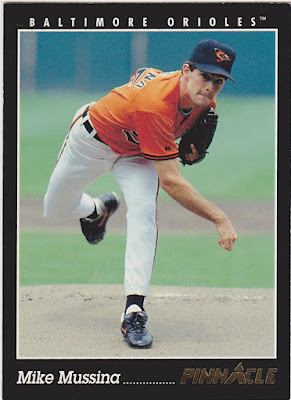 Joe always tosses in a NY Ranger card or two and this time was no exception. I'm fired up about the return of John Davidson. With JD manning the tiller I think good things are ahead for my Blueshirts. 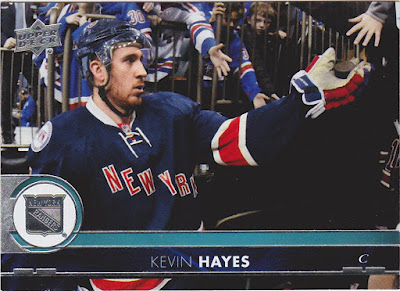 Here are a few more shots of Lou and his Brockabrella. 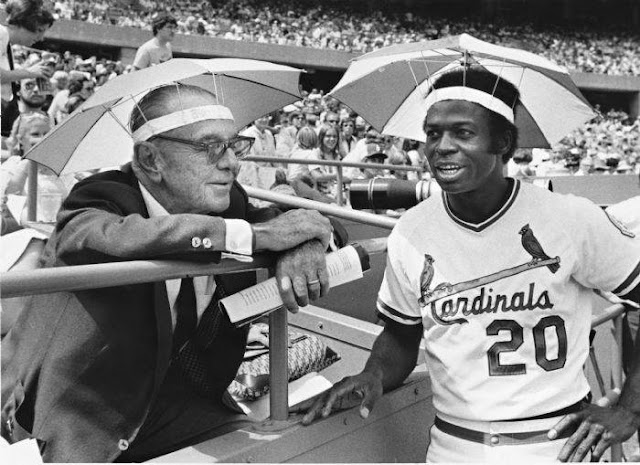 And the Fleer card of Jay Johnstone. I'm mildly surprised that the Bud logo made it thru the approval process at Fleer. 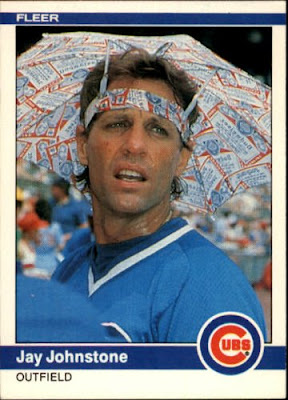 There were more cards but these are the ones I scanned. All are much appreciated. Thanks, Joe!!
Posted by Commishbob at 10:03 PM