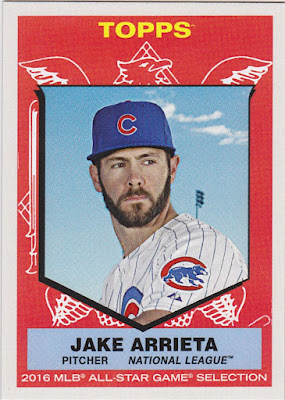 Topps has expanded their Topps Now concept into these mini 'sets' that they release every Thursday and make available for a week. I've looked at them when the emails arrived but never had any inclination to spend the $20 asking price. Some have been very tempting but until this one came along I hadn't thought any was worth the cost, at least in terms of my collection.

This one caught my eye because of my soft spot for the '59 All Star design. The 1959 Topps is my favorite set. But even at that I decided to pass on it. I'd recently bought a few blasters and decided my hobby budget was drained.

So I put it out of my mind, at least for a few days until I found I needed a card of this guy: 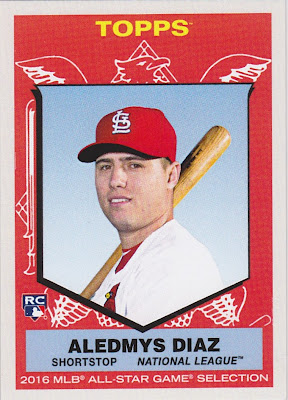 Yes, I picked up the St. Louis shortstop in a trade in my fantasy league. A quick eBay check turned up what to me was a surprise...he wasn't on any mainstream card issues. He was in some ridiculously priced minor league sets and I could have bought a custom card from a vendor I know for $7.50 but I always prefer a 'real' card. But this set was still available from Topps and five of the six cards were of guys who I could put into my binder so pulling the trigger was pretty easy.

It really IS a neat design. 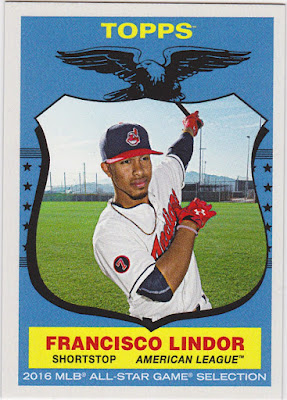 I had both Lindor and Seagar last season. Each of these cards easily boots their previous run of the mill one out of the binder. 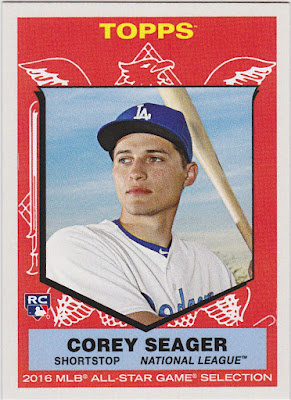 Bogaerts is the only card I didn't have a use for. 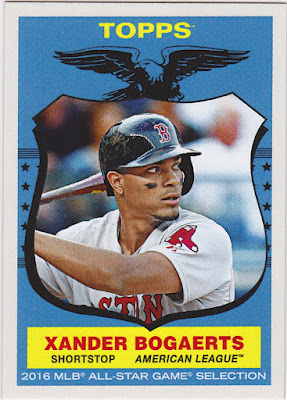 The backs are all the same. Here is the Bogaerts back. The card stock is very thick, nothing like the shiny, thin daily Topps Now issues. 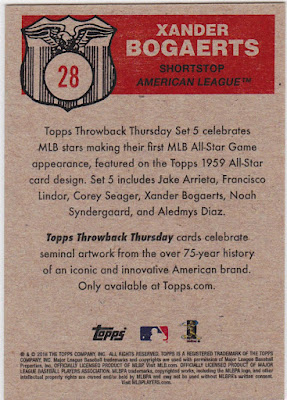 I have Thor in my alternate league. He looks like the guy in Outlander in this shot. 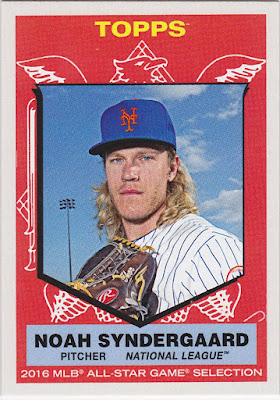 Back up top that Arrieta card is the only one of the five that I didn't stick in my fantasy player binder. It'll be tough to knock out his Topps Now that commemorates his no-hitter.

And just checking eBay again today it appears that Diaz has a Topps Now that was issued in the last few days. But it's a horizontal card and those almost never make the binder. When they do it's as a placeholder. Hey, everyone has their own quirks, right?
Posted by Commishbob at 2:03 AM