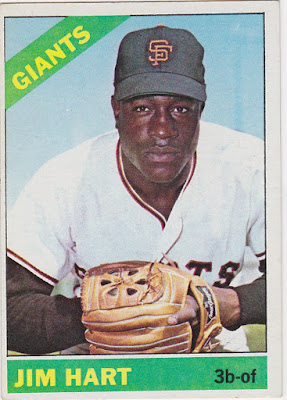 As I said before, when I pull cheap vintage out of dealers' boxes I'm usually just picking cards of players I liked or cards that catch my eye. Like these. I saw a lot of the Giants at Shea because my best friend and his father were fans. Since I was going to be there anyway and the 'big guns' had plenty of support I picked Jim Ray Hart as a guy to root for. Love the MacGregor glove with the 'crown' logo on the wrist strap. 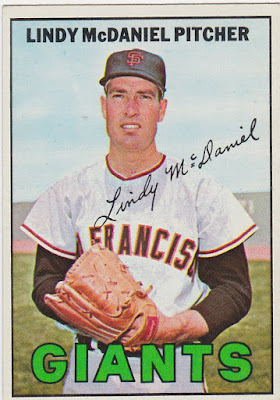 I bought two Lindy McDaniel cards, his '67 and '66 Topps. I already had a '66 McDaniel card but I may decide at some point to chase this set so a second one, a very cheap one, may come in handy. I collect his cards and you can read about my McDaniel fixation right here.

Cool that he's a Rawlings guy. In fact that glove looks a LOT like my Rawlings Wally Bunker. That's the exact same webbing. 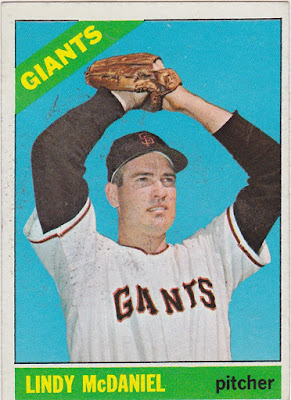 I think this '66 Pitching Leaders card was a dime. It's brutal but any card with Koufax, Drysdale and a guy wearing that amazing Braves' cap is certainly worth a dime. 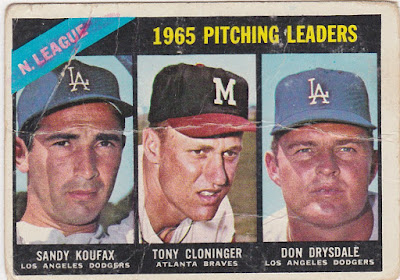 I scanned the back, too. I used to read the names and numbers on these leaders cards constantly. Note that there were seven 20-game winners in the NL in 1965. Seven! The NL might not have that many in the next decade! I know it's now totally un-hip, almost blasphemy to even mention games won by a pitcher. But in my day W/L was a pitchers claim to fame.

The only thing cooler than these lists were the team cards that gave the pitchers records against every other team. Those were awesome. 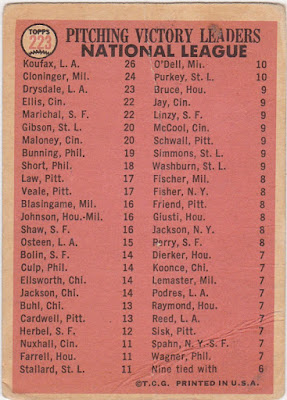 Now get off my lawn, dammit!
Posted by Commishbob at 1:55 PM