And such was the case for this latest addition to my Billy Pierce PC. 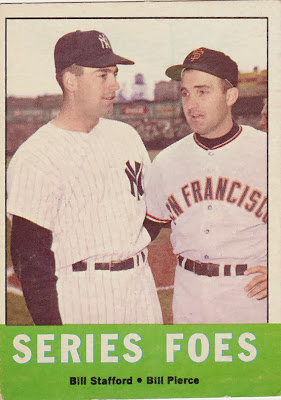 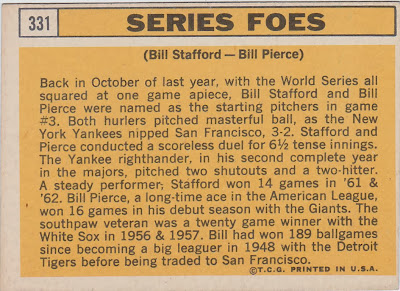 This 1963 Topps Series Foes is not part of the World Series subset but rather it's a stand-alone special. Bill Stafford and Pierce faced off in Game Three of the '62 Series with the Yankees' righthanded 14 game winner coming out on top.

My guy Pierce pitched well through six innings, not allowing a Yankee runner (they had just three) past second base. But he was done in by three straight singles in the bottom of the 7th and wasn't helped much by back-to-back outfield errors by Wille McCovey and Felipe Alou.

The Yanks behind a strong effort from Stafford won, 3-2. Pierce would return to the mound in Game Six and show his stuff. That game has a card in the Series subset that I'll feature soon.

My entry title refers to the eBay listing of this card as 'poor'. It looked pretty good to me in the pics so I took a chance and picked it up via 'buy it now' for a few dollars shipped. I'm pretty happy with the condition. It's in nicer shape than some of the cards in my '59 set that I thought were good enough not to consider upgrading.
Posted by Commishbob at 9:17 AM