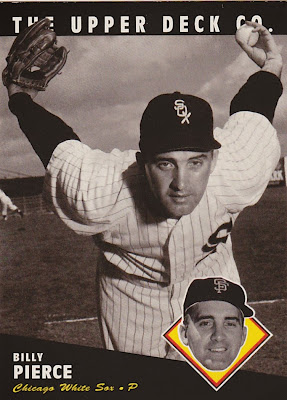 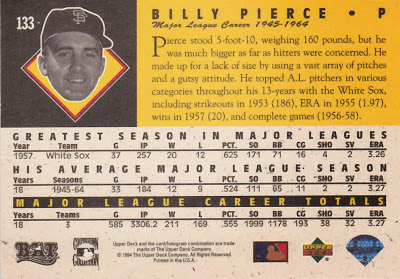 Here is the latest 99 cent addition to my Billy Pierce collection. It's listed as the '94 Upper Deck All-Time Heroes Pierce but that isn't mentioned on the card. I have another one or two out of this set, the Joe Garagiola is one of them.

Not a bad card for a buck. Nice wind-up pose there on the front, very 50's for sure. The floating head shot shows him in his Giants cap and it's repeated on the back. I hadn't noticed until now the unique stat setup on the card. The three lines of numbers cover his 'Greatest Season' (1957), average season and career totals. It's a pretty neat way of summarizing a players' career on these sets that feature retired stars.

I believe, but can't be certain, the Pierce was the Sox' starter in the first MLB game I ever saw in person. This July 24, 1960 doubleheader at Yankee Stadium fits the memories I have of my first day at a big league ballpark. I have lots of ticket stubs and old programs from games I saw as a kid. Nothing from that day though. I know it was at Yankee Stadium against Chicago, I sure I saw a homer from Mickey Mantle, my Dad loved doubleheaders. Since I don't think I saw a game in 1959 I'm pretty certain this is the one.
Posted by Commishbob at 7:56 PM