Football is killing me

The Texans suck. My fantasy team sucks. The Houston Cougars have lost three straight. I need a 'pick-me-up". And what better tonic for a case of the 'football blues' than a 1965 Pro Football Almanac with not just a Johnny Unitas cover but a whole Johnny U. section! I bought this on eBay a few weeks ago. It was as if I knew that my clubs would go into the dumper at this point in the season. I've gotten a kick out of reading through it. 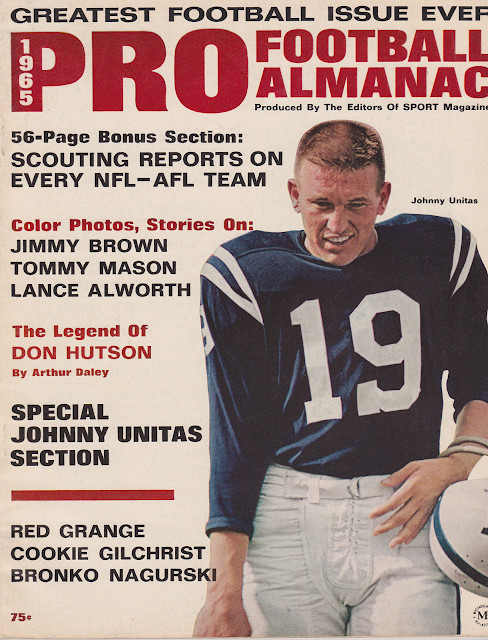 This was published by Sport magazine. When I was a kid my friends and I would argue and debate the relative merits of Sport and Sports Illustrated. I was a Sport guy. I thought SI was snobby and wasted too much space on stuff like tennis, horse racing, skiing and swimming while Sport was more 'meat and potatoes' with coverage of just the big four sports. And besides, Sport used full page pictures that were perfect for slicing out and putting on my cork board at home while SI liked to get fancy and run pics across parts of two pages or (horrors!) stick the caption into the picture itself. And who wanted a weekly magazine anyway? The Sporting News was THE weekly publication and everyone knew it, right? It wasn't until I got to my later teen years that I came to appreciate the SI stable of writers like Tex Maule and Frank Deford.

Anyway here is the title page. The 'stories' listed are in general very short. "The Jimmy Brown Secret" runs just three or so paragraphs. (His secret is courage if you are curious.) Some, like the feature on my guy Lenny Moore, and the old time player bios are longer. Those are the ones with a byline. Several of those writers, particularly Ed Linn and Arthur Daley were pretty well known to Sport readers.

Most of the pics are in black and white but there are some nice color shots of Lance Alworth, Jim Brown and Tommy Mason among others. 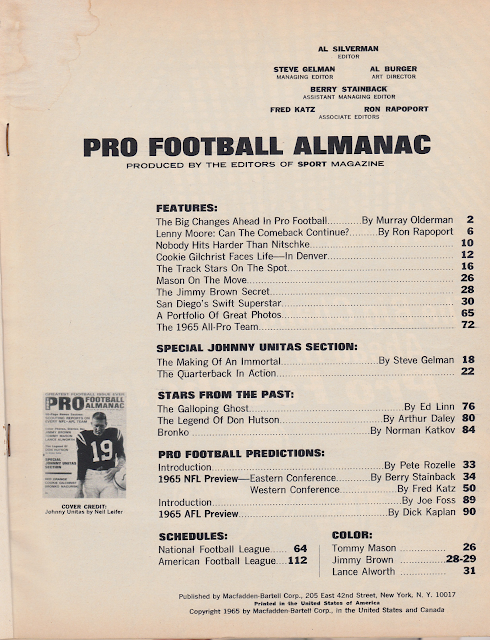 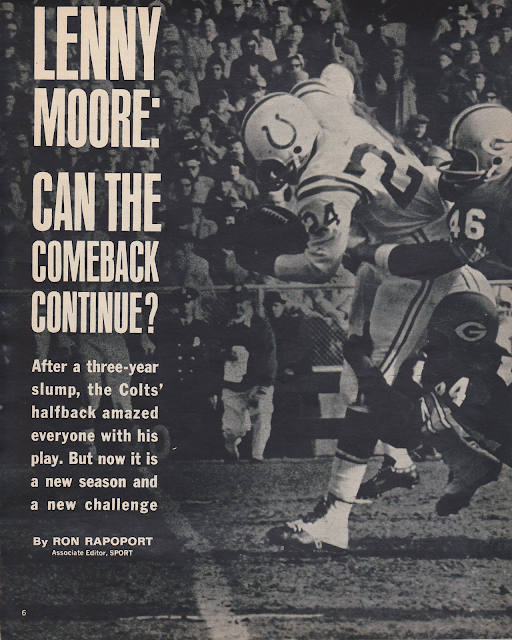 Every team had a write-up for the upcoming season including a pencil drawing of a star player in action. The whole 'preview' section was printed on the beige paper you can see below. 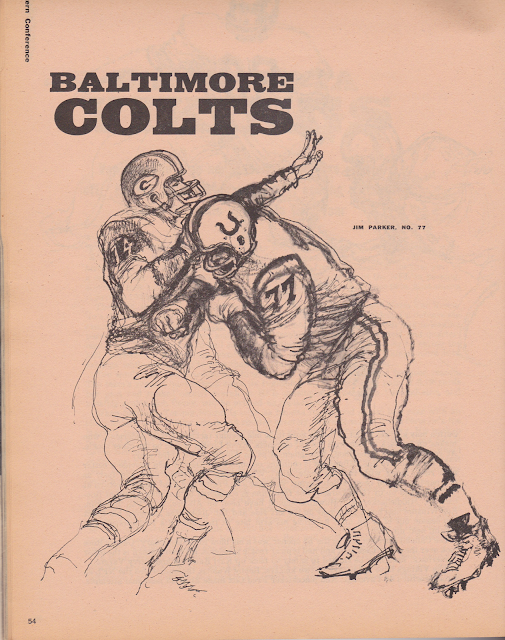 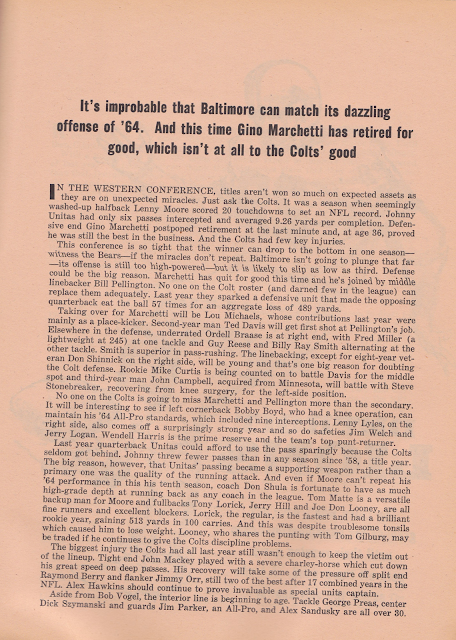 The All Pro team doesn't feature enough Baltimore Colts for my taste. And Ditka over John Mackey? No friggin' way!! But they did include to two greatest football players to ever put on a helmet, John Unitas and Jim Brown. Don't bother arguing, you would be wrong. 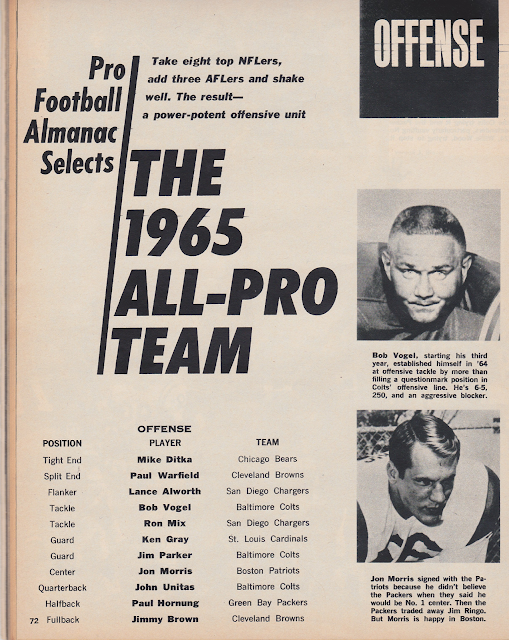 Inside the back cover was this self promoting ad for Sport. Note the list of sports they claim to cover. Pffft. Hunting?!?! I'm here to tell you that if a hunting article ever appeared in Sport I'd have been first in line to break the windows at Bartell Publishing in NYC.

At least every other month there seemed to be a story entitled 'So and So at the crossroads' or some similar career crisis statement. I remember the Johnny Callison cover. He was a big favorite of mine back then. 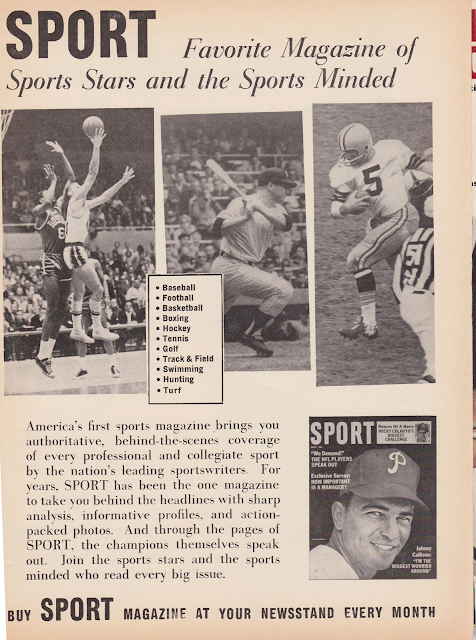 If I saw this back cover ad for the La Salle Extension Law School once I saw it a thousand times. We all thought the guy in the ad looked like the father of a friend of ours. 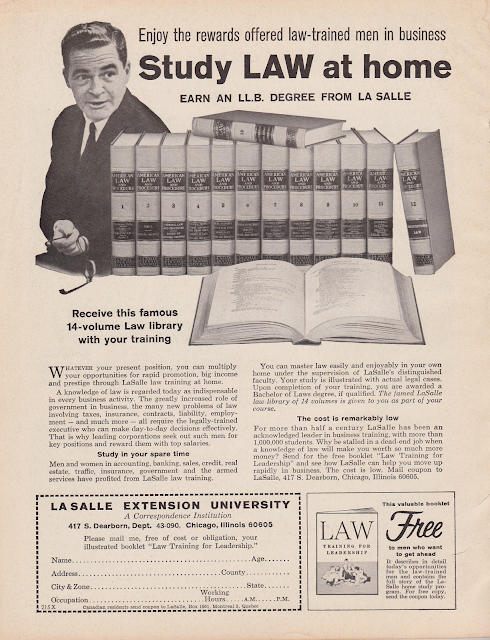 Posted by Commishbob at 1:07 AM