Product of My Obsession 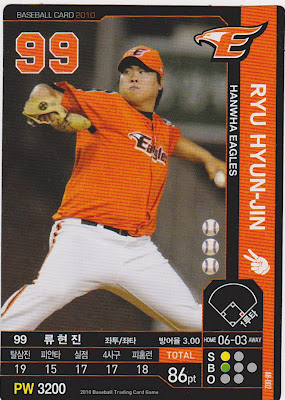 I've mentioned how I have this compulsion to acquire cards of players I have on my fantasy sports team. Sounds innocuous enough except for the fact that it bothers me to wait to acquire them. If I pick up a guy for my woeful fantasy baseball team my next step is COMC or eBay to find a card. It's stupid.

That's why I own a Korean card of Dodger rookie Ryu Hyun-Jin. I took the guy late in the draft because of some blurb I read somewhere and because I tend to draft players from teams I like. (Maybe that's why my teams suck, ya think?)

Anyway, the only remotely affordable card I could find of Ryu was this one. I picked it up for a few dollars +shipping. I no doubt overspent. And I know there will be any number of cards of the guy within a few months. Hell I just checked and there is a Bowman card of him now that sells for $4 for a 20-card lot. LOL

But it's cool to have a Korean card. I don't think the concept of baseball there ever crossed my mind. Shows you how little I know. 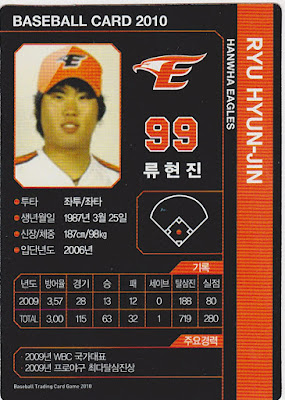 The seller tossed in a few extras from the same set including this on of a guy named 'Capellan'. That kind of intrigued me. He must be special, he goes by one name, right? It appears that he is this guy. Jose Capellan went 5-7 in 99 major league games for several teams for the past decade. He also spent the 2002 season at home serving a suspension. Oh, well. 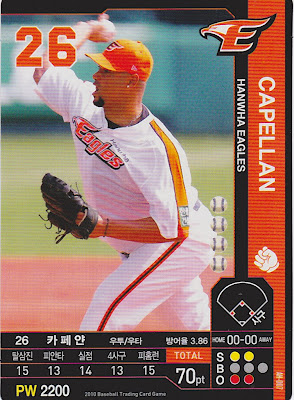 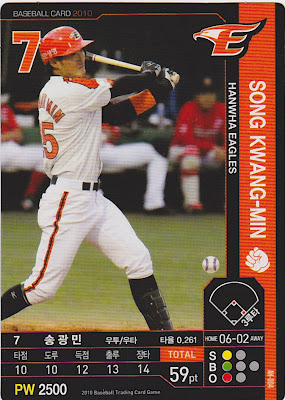