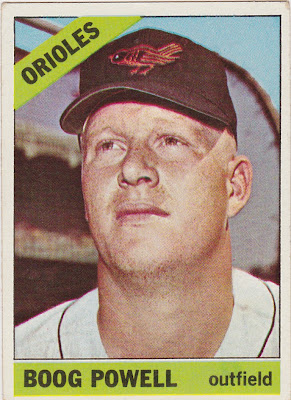 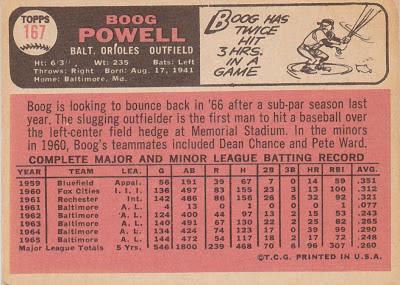 I think every Orioles fan of a certain vintage holds a special place in his heart for John "Boog" Powell. I know I do. He was just that kind of guy, powerful, jovial, larger than life. The '67 Topps Boog Powell is one of my favorites. The close-up photo really conveys his size, and oddly, his temperament  At least it does to me. He looks calm and satisfied with how his life has gone.

Like all of the 1000's of cards from the late 50's and 60's that were shot at Yankee Stadium I always feel like 'Hey, maybe I was there that day!'. Probably not.

But the card does reference a day I WAS at the ballpark, in this case Memorial Stadium. The write up mentions the fact that Boog was the first man to homer over the hedge row beyond the centerfield fence there. That was June 22, 1962 and it was my first ever time to see the O's in Baltimore. It was a twilight doubleheader against the Red Sox on a Friday. The Sox won the first game 2-1 in 10 innings with the loss going to Hoyt Wilhelm. Ike Delock and Milt Pappas had gone pitch for pitch for most of the game.

Don Schwall was pitching the second game for Boston. In the seventh Powell launched his monster blast out over the hedges towards these houses: 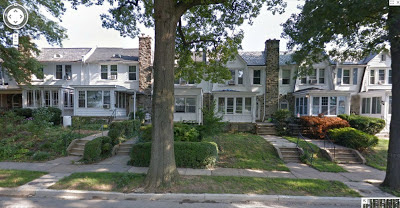 It was impressive. I remember my uncle who was, unlike my Dad, a serious Orioles fan, saying he'd love to have been out there to see it coming. The shot tied the game at 2-2 and Hobie Landruth, of all people, won it in the ninth for the Birds with a walk-off homer. Future Hall of Famer had gone all the way for the Orioles. I believe that was the only time I ever saw him pitch.