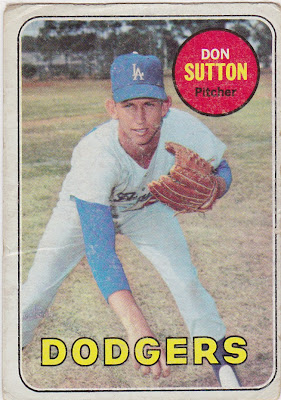 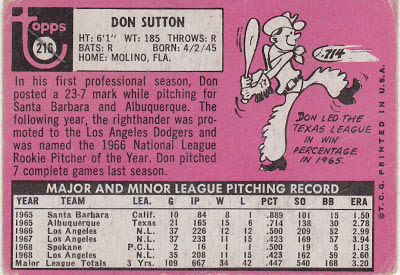 Another from my late '60s pile of 'cards that I wish I'd taken better care of'. This is my favorite Don Sutton card, the one I see when I here his name. I saw a lot of him in the time he was here with the Astros in the early 80's. Seems like it was a longer stretch than under two seasons but that's how minds play tricks on ya.

Anyway he finished the '82 season with Milwaukee and pitched in the last game of the season at Memorial Stadium against the Orioles. My Birds had taken three straight from the Brewers to catch the in the standings as the season was ending. It was a crazy weekend.

Matched up against Jim Palmer Sutton broke all of out hearts with a dominating 10-2 win in what at the time was Earl Weaver's 'good-bye' to Baltimore. Video of the games aftermath is in this post.

Sutton retired after a brief return to the Dodgers in 1988 with a record of 324-256. Hard to believe a guy could win that many games games and only win 20 once.
Posted by Commishbob at 6:18 AM