Another Red Sox and a White Sox were among the group of 1958 Topps All Star cards that I picked up last week. Here is Boston infielder Frank Malzone. He was known as a fine fielder who could also hit some as indicated in his 1957 numbers shown on the card. a .292 average with 103 ribbies isn't too shabby. Looks like he had good success against everyone except the Yanks and Senators.

The card itself has some soft corners and a crease that shows mostly from the back but it's certainly collectible to me. My scanner seems to dislike these cards and the scans show a level of 'scuffing' that just isn't there when you look at them in person. 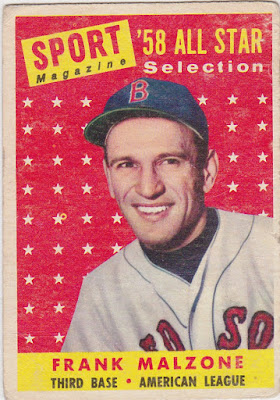 Sherm Lollar's skills behind the plate earned him the spot on this All Star card. He had several Gold Gloves to his credit. He was a seven time AL All Star including the three years prior to and following the 1957 season reflected on this card. '57 was the only year in the second half of the decade that he did not get a spot on the team.

This copy is a bit better than the Malzone both front and back. I love the Sox cap logo outlined in red that they wore in this era. I have one of those. 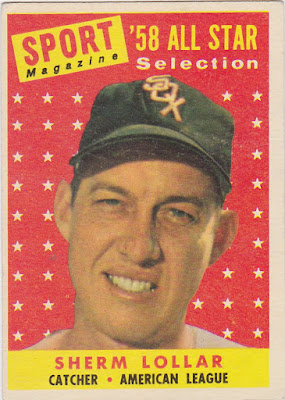 Posted by Commishbob at 6:27 PM