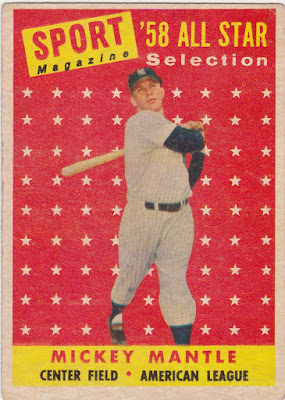 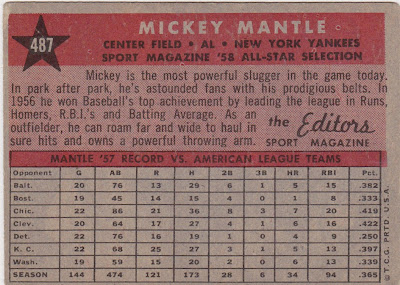 I've been after this card for a long time. I'd bet I put in eBay bids/offers on 40 different copies over the last few years. And I never was able to win. That's because for once I set a certain standard and price point and was determined to stick to it. I was finally able to pick this one up for a 'best offer' of $27 or so.

Chasing vintage cards to me is chasing childhood memories. Yankee fan or not (I was not) I watched many many of their games with my Yankee fan father growing up. And you couldn't watch that many games without developing an admiration for the sheer talent of Mickey Mantle.

Combine that with my affinity for the 1958 Topps All Star subset and you get a card that I've had on my want list since I've been back in collecting. It's not 'gradeable' but it doesn't have any creases or paper loss. The corners are soft but I'm not too fussy about corners, especially when the picture is clean and the back looks as good as this one does.

As I mentioned in my Ted Williams post last week the numbers versus each team makes a great card back for a numbers nut like me. Mickey hit less than .333 against only one club, the Tigers. I would have thought that Yankee killer Frank Lary was responsible for that but Mantle hit .357 against him in 1957. But Billy Hoeft and Paul Foytack gave him fits

I haven't decided on which of my 'Most Wanted' cards I'll pursue next. The '56 Koufax is tempting. It's the only one of his Topps cards I need.