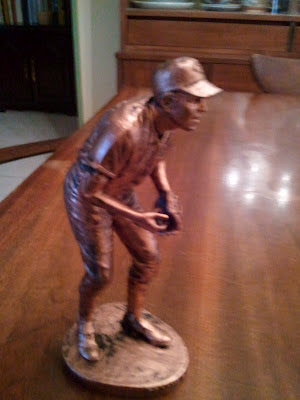 I really wish I could have been there. From what I have read and seen it was a very special night. Coupled with the excitement of the Orioles stretch run (how long has it been since that was a relevant term) I bet the night was very memorable.

Matthew who pens the Foul Bunt blog was lucky enough to be there and posted a great re-cap and some nice pictures. You can check it out here.

Brooks holds a special place in the heart of Oriole fans, especially those of a certain vintage that were fortunate enough to see him play or actually interact with him. I was blessed to do both. I named one of my sons for him, that's not unusual as many folks in the Baltimore area carry the name or a derivation of it.

I've told some Brooks stories on the blog previously. And posted several pictures but I'll post them again here along with a few new ones.

Up there at the top is my lousy phone picture of my statue replica that arrived today. Next pic is Brooks and I taken at Arlington Stadium in the early 80's when he was broadcasting Oriole games. 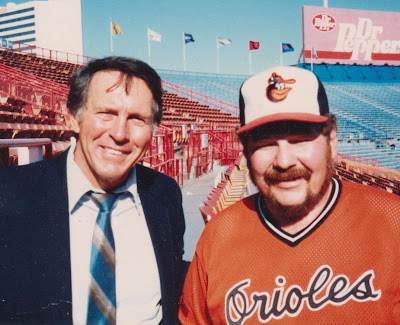 Here is my Brooks (Brooks Robinson Andrews) with the original Brooks taken at a card show circa 1997. 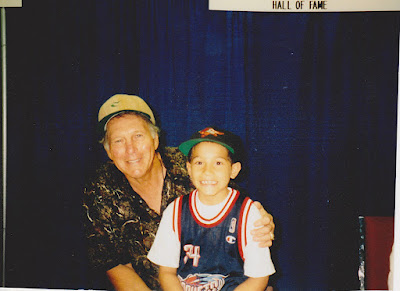 And finally here is Brooks at Arlington Stadium in a shot I took before a game in 1975 that I referenced in yesterday's post.

EDIT: Jeremy made a comment about this picture that caused me to look at it a little closer. It seems that Brooks is signing a hardback copy of his 1974 book Third Base Is My Home. I have an autographed copy of the paperback version on my shelves. I'm not sure where I got it but I've had it for a long time. I'm pretty sure I wasn't the one who obtained the autograph in my version. 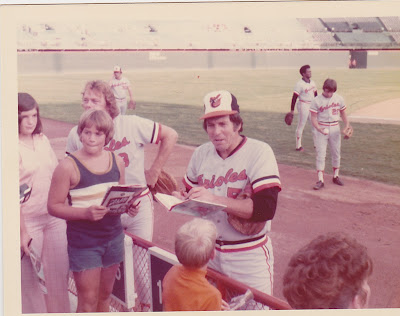 Posted by Commishbob at 7:19 PM