As Game Four of the ALDS (or whatever they call this series) rolls on I wanted to post something to maybe help the Birds break this tie and send it to the fifth game. 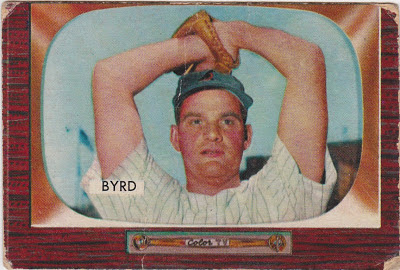 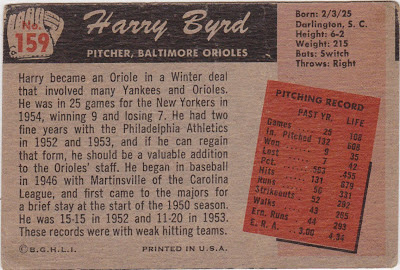 This '55 Bowman Harry Byrd shows him airbrushed into an 'Orioles' cap. Actually I'd bet it wasn't airbrushed. Just painted in. Either way it's a crude job. You can barely tell what it is.

Byrd was a Yankee in '54 but a trade delivered him from the 'dark side'. That's what I'm hoping the O's are able to do tonite. Bring back out a win from the world of pinstripes. Byrd started the year with the O's in 55 but after seven starts and about that many relief appearances, he was waived and claimed by the White Sox in June.

The card itself is from one of the sets I loved way back when even though it was printed before I was aware of cards. There were some floating around in the late 50s and early 60s among the kids I hung out with.

Manny Machado homered last night. Unfortunately for me I missed it as we had tickets for a show and I hate backing out on something my wife enjoys. Maybe Manny can do it again. This is the only Machado  card I have. Scanned better than I thought it would considering how shiny it is. 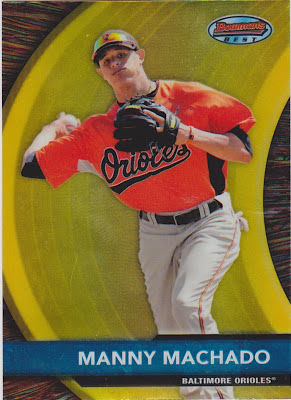 Posted by Commishbob at 8:47 PM