My Worst Brooks card (is there such a thing?) 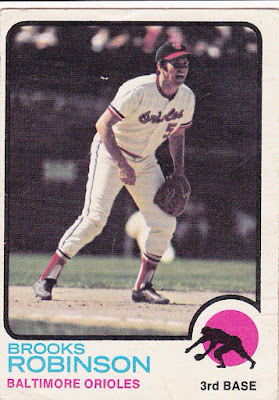 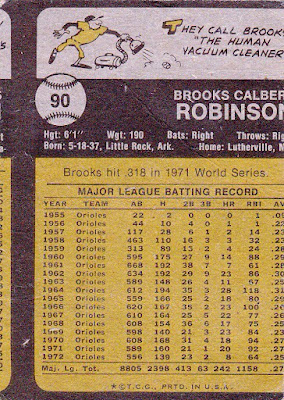 I came across this thing in my box marked "Oriole Junk". It's a '73 Topps Brooks Robinson and it's a nice card in the early '70s Topps mold. I sometimes think Topps just told their photographers to buy a cheap ticket and sneak down into the box seats to take their pictures.

The thing that distinguishes this card is how off center it is. No doubt it's the worst balanced card I've found in my collection. And as a guy who has collected the '59 Topps set, that's saying something. It is weird though that the front is so much better than the back. I always expect the two to be in sync border-wise.

The stats on the backs of baseball cards were always a big part on their appeal to me growing up. There was no better way for me to pass time on a rainy day than to pour over card backs. And the longer the columns, the better. I was interested in how guys' numbers ebbed and flowed over the years.


EDIT... I was sitting at my car dealers' service department waiting on an oil change when I originally wrote and posted this today using the Blogsy app on my IPad. I haven't ironed out the kinks in my IPad blogging skills yet. But I'm working on it.
Posted by Commishbob at 11:50 AM