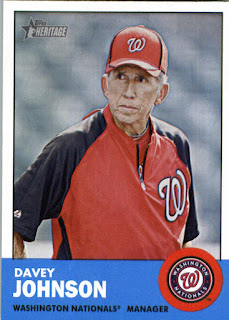 I have about a hundred or so contemporary cards, meaning cards from 2000 to now. That's not counting my one extravagant purchase of a box of last year's Allen & Ginter. I have them in a small card box and on Monday night while I was trying to get my mind off R.A. Dickey and Brett Myer killing me (for different reasons) I thought about blogging something to pass the time. So I pulled out that box and counted to the 44th card (that was my favorite uni number) and it was this Davey Johnson card.

He always brings to mind a couple of things. First, his love of stats and computers. He was ahead of his time in that regard I think. I'm trying to find a reference Jim Bouton(?) made to Johnson's ability to know exactly what he needed to hit to finish a season at .280 or so. Supposedly Davey didn't want to raise expectations for the next season.

Second, I remember praying for a hit as he batted against Jerry Koosman in the ninth inning of the fifth game of the 1969 World Series. I was watching with a friend and his mom in their living room. When Cleon Jones caught Johnson's fly ball I felt sick. Literally. I just got up and walked home so they wouldn't see me cry.

I know it's senseless but I've never really gotten past the Orioles firing Johnson after the '97 season. I had tuned out baseball during the strike a few years previous and was just letting the O's success suck me back in as a fan when Peter Angelos decided that Baltimore wasn't a big enough town for both of them. Yes, I know that Johnson had an ego problem and I know about the Alomar 'thing' but hell, he's just won Manager of the Year and two division titles. He'd only finished lower than second once in his managerial career and that was after he took over an already floundering Reds team in 1993. And the turned that team into a division winner the next two years!

Don't get me wrong, I've become a Buck Showalter convert. I'm glad my initial reaction to his hiring was very wrong. But the better part of the last two decades might not have been so futile had Davey Johnson remained in the O's dugout. Contrary views are welcome.

Johnson looks every bit of his 69 years on this card. I guess managing will do that.
Posted by Commishbob at 8:41 AM