The NHL gave out it's awards Wednesday night and the Rangers' Henrik Lundqvist took home the Vezina trophy as the league's best goalie in 2011/2012. I think he deserved it for all the nights he 'carried' a pretty punchless Ranger team and delivered them to the best record in the Eastern conference. He was nothing short of spectacular night after night. But I didn't think he would actually win.
Here's the Lundqvist 07/08 Fleer Hot Prospect card. Pretty cool for a 50 cent card I think. 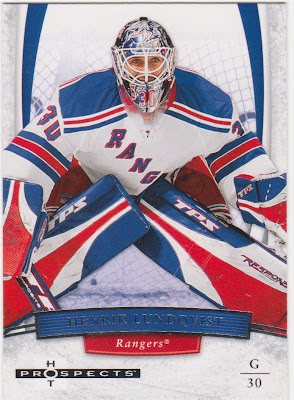 It was my only Lundqvist card until I scored this one on eBay: 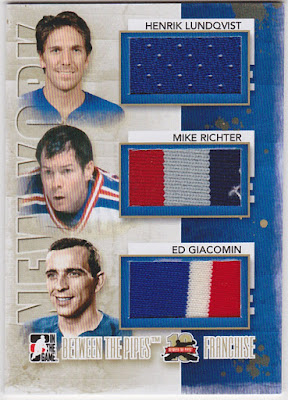 A jersey piece card of my three favorite goalies! I spent more than I should have on it but, as a Ranger fan for 50+ years and a guy who's favorite player is usually the Ranger goalie,  how often will I get a chance for a card anywhere close to this?
Posted by Commishbob at 6:49 PM