The middle section of my hanging cello pack of 1990 Fleer had Darryl Strawberry on top.
This was Strawberry's last year as a Met. He moved on the the Dodgers and the Yankees with a year in San Francisco as well. I have absolutely no memories of him as a Giant. None. And not many of him as a Yankee. Baseball wasn't front and center in my life during The Straw's term in pinstripes. 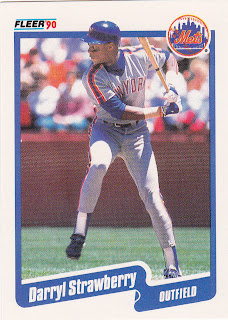 The sticker is a multi- team deal with four AL clubs. The backs of these things had trivia questions. I scored about 20% correct on them. My scanner sux. But that's not why these stickers have an oddly mis-cut top border. It's because Fleer cut them that way. Or so it seems. All three stickers were like this. 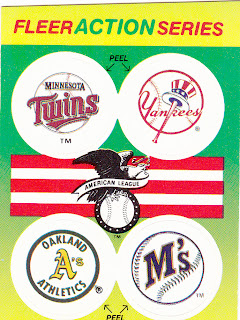 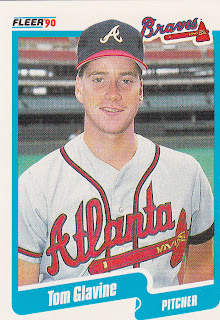 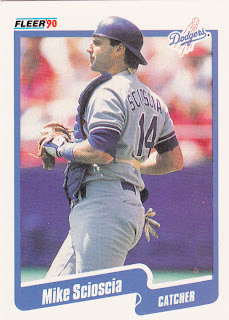 A pair of Birds, finally! First here is Bob Milacki. He won 14 games the previous year, led the AL in starts. He never approached that level again. 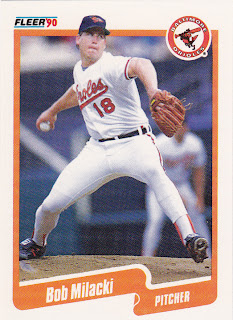 And Steve Finley. He didn't become a power hitter until he got to San Diego and he discovered ..... sunshine. I guess. 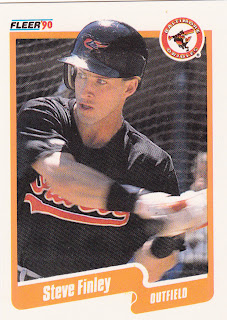 Terry Puhl. 1990 was his last season in Houston. He played a bit for the Royals in '91. He was always very popular as an Astro. He currently is head coach at UH-Victoria and manages the Canadian national team. 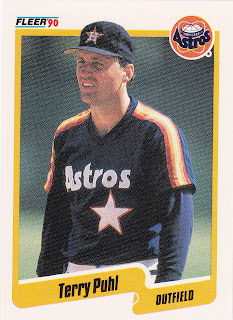 Mark McGwire. Other than thinking his is one of the most misspelled superstars' names, and pointing out the fact that he married a former pharmaceutical sales representative, I got nothin'. 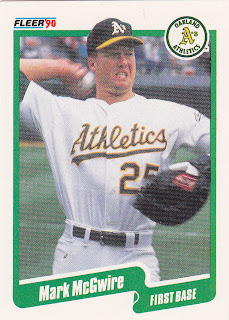 I have realized that I have yet to show the backs of this set. Likely because they are so unremarkable. But I'll do it here:

The backs of the base cards are all nearly identical with pinkish/red boxes and blue text. This is Terry Puhl's card: 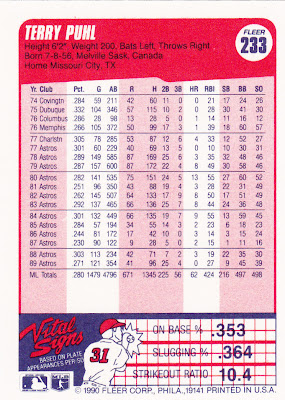 Basic info, full stats and 'Vital Signs' which includes the same stats for each position player and each pitcher. Here is the back of Glavine's card: 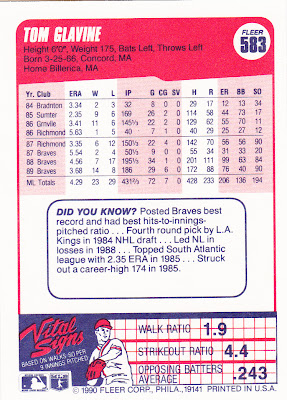 Some players with fewer stat lines, like Glavine, got a 'Did You Know?' box with some background info on the player. I've enlarged the cardback images because they are pretty hard to read otherwise, even in person.
Posted by Commishbob at 8:13 AM