It's been awhile since I added anything to my Baltimore Colts binder so finding these 1999 Fleer/SI Greats of the Game cards on COMC was cool. I think I had seen some before but hadn't paid much attention at the time. I was too busy chasing down the vintage Colts cards for my project.

I haven't check to see if there are others I'm missing but these four will do for now. Nice that these are on-card sigs. The folks in charge of this used actual covers or really nice SI-type pics.

Here are the front and back of the John Mackey card. BTW...if you are still wondering why Andrew Luck could walk away from the NFL while he could still function, look up John Mackey.  Or watch the video below the cardback. 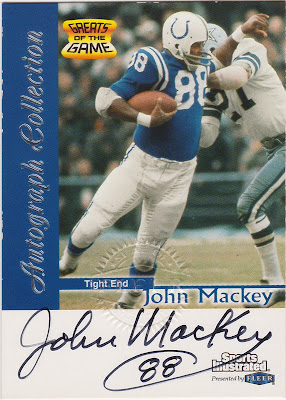 All the card backs were the same as this only name and logo changed. 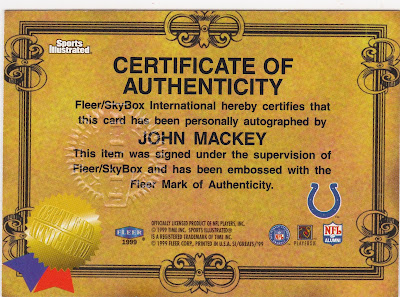 Mackey defined the tight end position, invented it really. And was kept out of the Hall of Fame for many years because his work on behalf of the Players Association. Total bullshit. Like John Unitas, he finished his playing with the Chargers.

OK, no more down notes. Enjoy the other three cards.... 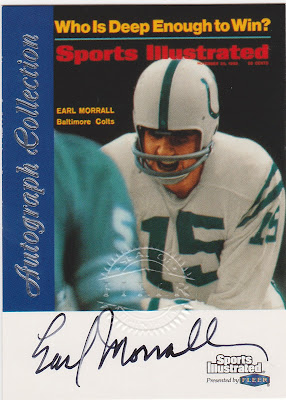 Earl Morrall. He had an underrated career. 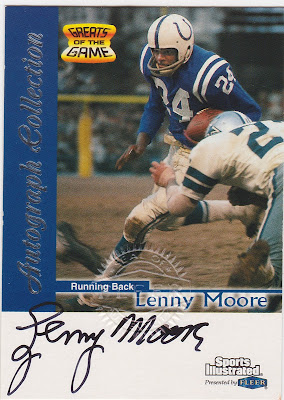 The amazing Lenny Moore!!! My picks for the top five most fun-to-watch players...Earl Campbell, Jim Brown, Gale Sayers, Barry Sanders and Lenny Moore. Oh, and you want more reason feel Luck did the right thing? Look at what Earl Campbell is fighting these days. 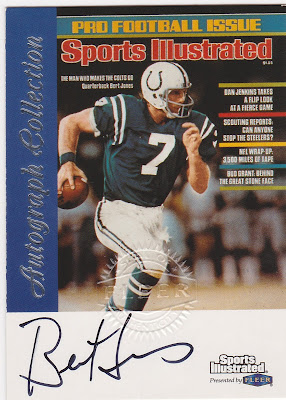 Finally, Bert Jones, The Ruston Rifle. Does anyone remember his final year, the one he spent with the Rams? Didn't think so. I'm not sure why all great Colts players ended up in California to finish their career.
Posted by Commishbob at 9:55 AM