After a series of unavoidable events caused me to miss a few months I finally made a hotel card show in October. I'm not chasing any baseball sets and the one football set I'm building (1964 Philly Gum) wasn't in great supply among the dealers of vintage cards. I was able to add a couple of stars from that set.

So I made do with grabbing some cheap cards that just caught my eye. I'm not sure what attracts me to cards of coaches like this 1954 Topps Ray Blades. But I added it to my stack and I'm glad. Blades was a player I wasn't aware of but in the 1920s he carved out a nice career as an outfielder with the Cardinals. As the back of his card notes Blades hit .342 in 1925 during a string of .300+ seasons. You can check out his SABR bio here. 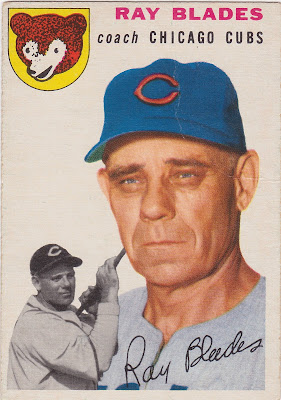 Blades was one of those baseball 'lifers' who played, coached, managed and scouted for numerous clubs thru several decades. He managed the '39 Cardinals to a second place finish in his first year at the helm but was fired early the next season after the team stumbled early. 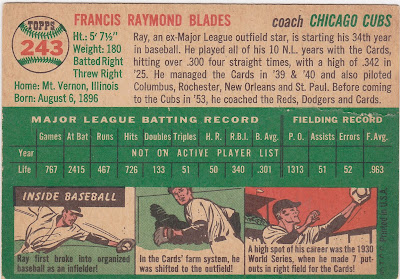 When I see these cards of coaches I always wonder if Topps someone else in the checklist originally but had to remove them for some reason. 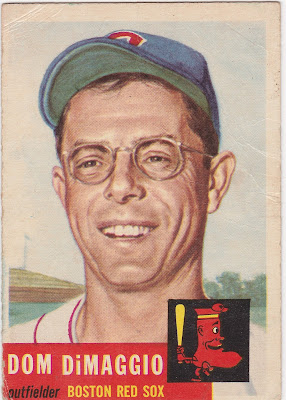 Not much to say other than I don't think I was aware of the fact that Dom was four inches shorter than his more famous brother. 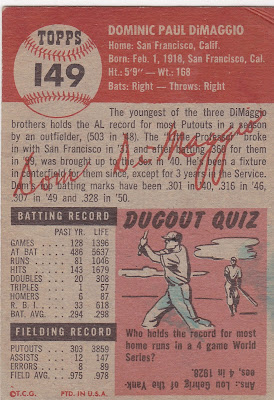 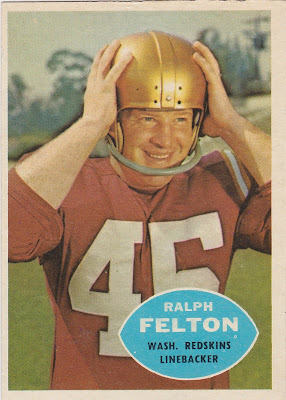 I love this 1960 Topps of Ralph Felton. I didn't know him when he played but a quick search showed that he won a national title at Maryland and played 11 seasons of pro football with the Redskins and Bills. He was better known as 'Rass' Felton and opened a grocery after his playing days.

There is something about the 1960 Topps football set that just makes it appear to be a much older set. I can't really explain it but the set strikes me as something from the mid 50s. 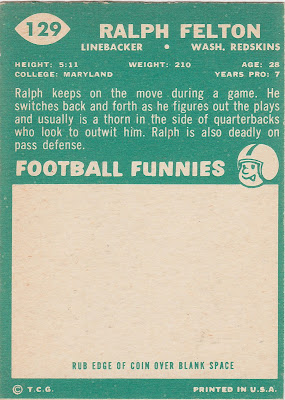 George Webster was a terrific player in his day with the Oilers. He was an All American safety at Michigan state but the Oilers made him a linebacker. The story goes that as a rookie in a 1967 exhibition game against the Cowboys he caught Bob Hayes from behind. I was at that game at Rice Stadium but I have no recollection of that. I do remember Hayes made a long catch and run on what was a rainy night. 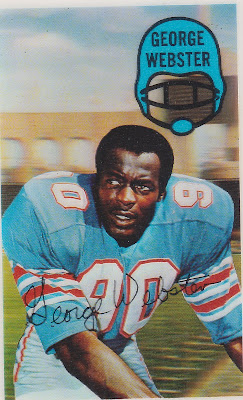 My scanner didn't do a very good job on this 1970 Kelloggs' 3-D Webster. It's a really neat set. Very underrated. 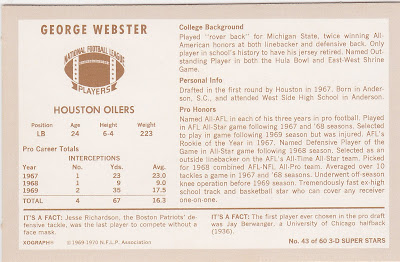 One of Webster's teammates at Michigan State was Gene Washington. His is a pretty remarkable story of growing up as an athlete in Texas. His home town had no high school that would allow blacks so he took a bus to Baytown, across under the Houston Ship Channel, to all black G. W. Carver High School. He played football and ran track and set records against other black high schools in the Prairie View Interscholastic League.

He went on to become an All American for the Spartans and is a member of the College Football Hall of Fame. As for Carver...it's still there in Baytown. It's no longer a 'stepchild' and no longer a high school. I've taught and coached there for nearly 29 years. Gene has visited a few times and is a gracious, soft-spoken gentleman. When I look up from my door at school every day I see a fantastic framed nearly life-sized photo of him in posed action for Michigan State. Next to that are framed banner listing the football, hoops and track state titles the Gene Washington and his schoolmates won while at Carver. 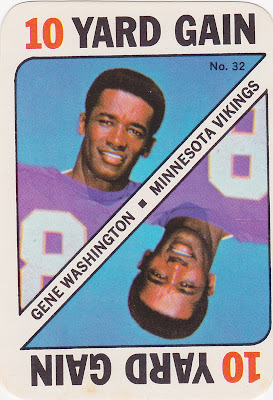 This is a 1971 Topps Gene Washington game card. It's the spiritual brother of the 1968 Topps baseball game inserts. Pretty neat. I can't believe I never thought to pick it up for my GW collection before this. Washington played seven NFL seasons, all for the Vikings. There is a neat video on the Vikings site. It's part of a documentary done by Gene Washington's daughter chronicling his 'road' to Michigan State and the pros. It's well worth the 10 minutes. 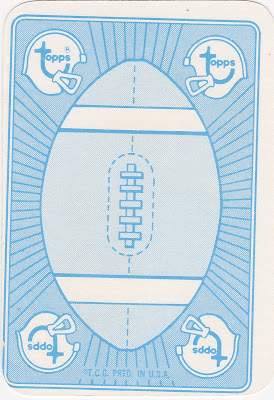 And finally a Cal Ripken medallion card from one of the Topps issues of 2017.  This was a freebie. One of the regular dealers at the show was ripping mini boxes (probably looking for Aaron Judge cards) and this was some sort of insert. I've bough enough stuff from him that he will sometimes toss Orioles things my way. 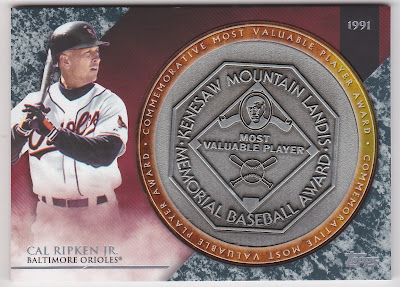 And yes, the medallion appears to be crooked. That's not a scanning error. 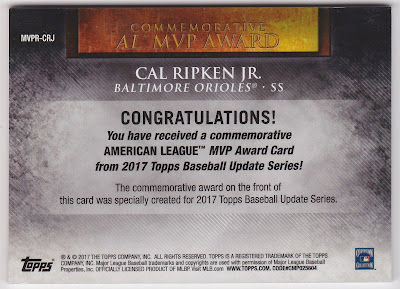 I'm actually closely reading the back for the first time and see that it came out of Update. Likely to be the only card out of that set I'll own.

I was only mildly disappointed at the lack of vintage football at the show. There are plenty of dealers who carry football cards but they stock mostly new stuff.

Posted by Commishbob at 9:34 PM