Warning: This post has pics that run outside of the center column. I usually avoid that but I wanted these to be seen clearly. 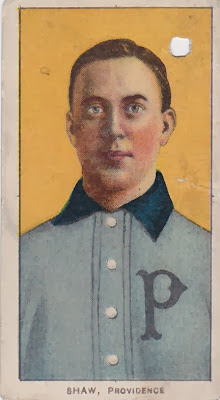 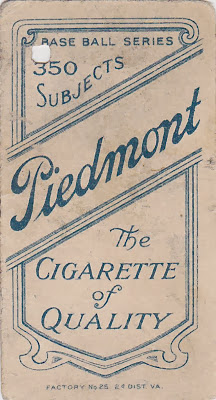 That's my newest T206. It's Royal 'Hunky' Shaw of the 1909 Providence Grays of the Eastern League. Why would I track it down? Good question.

Last Saturday there was a fascinating (to me) entry on one of my must-read-daily sites, UniWatch. That entry, which you can see here, contained a treasure trove of vintage baseball team photographs that are part of the collection at the City of Vancouver Archives. That sort of old baseball picture is something I'm a fan of and I 'collect' them off the internet when I come across them. Needless to say I was busy saving lots pics to my Seagate last Saturday morning.

Of all the photos shown or linked in the article to this pic was perhaps my favorite: 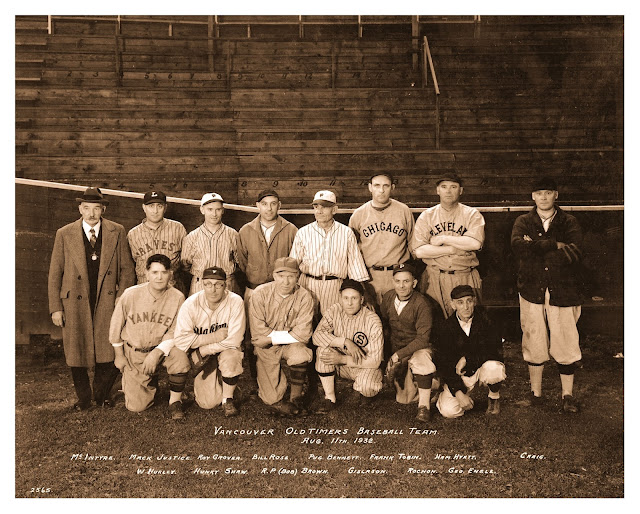 The Vancouver Oldtimers Baseball Team as they appeared on August 11, 1932. The picture caught my eye as it was different from many of the rest. It obviously was not a 'team' picture but rather a picture of a group of former players with Vancouver ties that had gotten together for some reason.

I did a bunch of checking and couldn't come up with any more info on this group or why specifically they might have been together that day but no matter. I got to looking at the individual players and saw that professorial looking dude on the front row, second from the left. He was identified as 'Hunky Shaw' on the picture and I thought I'd try to find out about him. No good reason other than curiosity was involved.

Turns out Hunky was a pretty interesting guy. Born in Yakima, Washington in 1884 he missed by a week of being the first Washington State native to play in the majors. He was, however, the first player out of the University of Washington to make the big leagues. But 'making' the big leagues for Hunky amounted to a quick and inauspicious moment. He began in pro career in Portland in 1904 and was drafted in 1907 by the Pirates. He was with the Pirates in 1908 and on May 18 he got his one big league at bat. He whiffed.

Six weeks later he was sold to Jersey City of the IL and he never made it back to the big leagues. He played minor league ball through 1916, mostly on the West Coast with several PCL and Northwest League teams. He actually led the PCL in hitting in 1910 as a member of the San Francisco Seals. His average that year? A hefty .281 (random fact: Tom Tennant got into 224 games that year in the PCL and had 856 at bats!). In an indication of how 'dead' the Dead Ball Era really was the Seals had a team batting average of .226 which was good enough to lead the league.

I also learned in the course of my research that :

This fairly amazing article from the Spokane paper in 1914 goes into detail on the suit which came about because the Seals had suspended Hunky in 1911 for 'indifferent and listless' play and had therefore cost him the salary he would have made with Spokane who wished to sign him. The suit was for $214.35 which was the amount of money he lost while suspended. There is no word on the disposition of the suit.

Another article, this one from the San Francisco Call in 1911 mentions that Shaw is about to join the Seals after a dispute with the club over his role and his salary. So apparently Hunky held out with the Seals in 1911 and then played like crap and got suspended for a month. THEN years later he sues for 'back salary'! WTH?

So that's his story and that's his T206 card. It came cheap because of the punch hole floating near Hunky's head. Funny what you might come across when you turn on your iPad with a cup of coffee on a Saturday morning.

A Google Book on the SF Seals had a few references to Hunky Shaw. First came this: 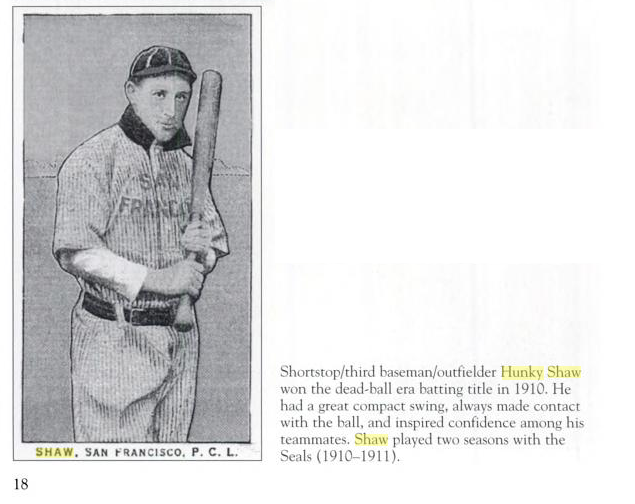 I love that Shaw inspired confidence in his teammates. Though his indifferent and listless play I wonder?

Then there is this cool team picture of the 1910 squad. I believe that Shaw is on the top row, fourth from the left. 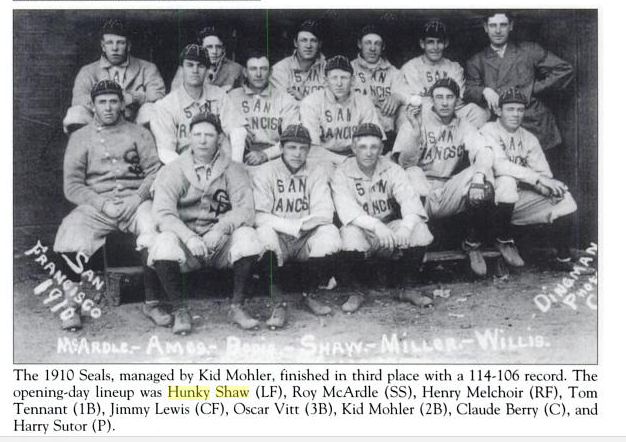