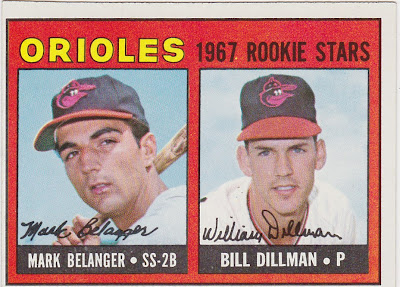 Back in the late 70s or early 80s I decided to pursue a hobby adventure and track down every Oriole card issued since the franchise moved to Baltimore in 1954. It was a fun project and it kept me busy for about five years. I had the 1967 Brooks Robinson (like the Mark Belanger/Bill Dillman shown above it is a high number) so the only other expensive card was going to be the Brooks rookie from 1957.

The Robinson card I needed proved to be much easier to acquire than the Mark Belanger Rookie. Lots of '57 Robinsons were around. It was just a matter of finding one I could live with and afford. It was one of the two last cards I needed. I ended up just swallowing hard and buying one at a show in Beaumont, Texas. I'd gone to that show hoping to some different dealers and maybe finding the Belanger. I went with a friend and remember staring at the B Robby rookie the whole way home. So the 1967 Mark Belanger/Bill Dillman rookie card was the last card I needed to finish that project.

Back then it was a tedious job to find one card, especially a high number Topps card. I scoured all the publications I could find without any luck. I frequented a couple of LCSs and it never appeared in their stock. Card shows were much more prevalent back then. There was a medium to large sized show in the Houston area every few months and there were many 'hotel meeting-room' shows that were set up biweekly. I drove to a big San Antonio show that one of the more prominent area promoters put on.

But that Belanger took a long time to appear. I found it (finally) at a show in the Astroworld Hotel and Convention Center. It was in a binder with at least one other one and I bought two copies. One went into my collection binder and one went up on display in a frame. I had never heard of the term 'White Whale' used in terms of sought after collectibles. But this Belanger/Dillman card from 1967 was mine, even if I never knew that.

BTW... I'm still chasing my football version. I think that one is hopeless.
Posted by Commishbob at 6:30 AM