Despite appearances, I'm not intending to turn this into a '67 Topps blog. In fact, I'm wondering if I should really attempt the set at all. That Seaver rookie is reaching astronomical price levels and I'm just not sure I want to drop that much on a card. I'll have to give it some thought. Most likely I'll seek out a low grade copy and try to keep the cost down that way. We'll see.

Meanwhile, here are a couple new-to-me '67s that arrived over the last few days.This Mays card, IMO, is one of his better ones. I like the portrait shot here for sure. This is actually an upgrade over a battered copy I've had for as long as I can remember. 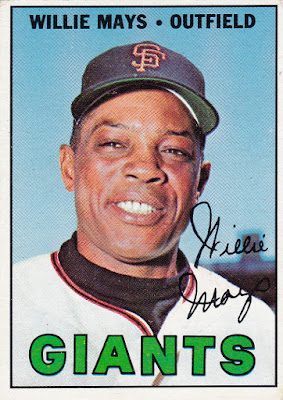 These next two are both Mets and were purchased as a way to fill out an order on eBay. I bought six or seven cheap modern baseball and football cards from him to fill some fantasy sports binder needs. He offered both a % discount and free shipping with a ten-card order so I filled it with these two and a couple others I found of University of Houston alums.

I just recently posted Ed Bressoud's 1960 Topps card over on that blog.  He was with the Cardinals when the '67 set was issued and it was his final season as a big-league player. He only had 75 at-bats. He later became a minor-leagie manager and dod some scouting.

I liked Cleon Jones...right up to the second he caught Dave Johnson's fly to finish the '69 Series. Now, every time I hear his name that moment returns to me and I'm just a little sadder. Good ballplayer, though. And this '67 is a sweet card, made even better with that Topps Rookie trophy. 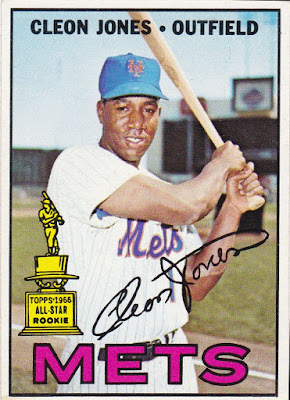 Now I'm gonna go cheer myself up by watching some football. My primary fantasy team is a monster!

Posted by Commishbob at 4:58 PM