And I for one am happy about it. Not much going on for me hobby-wise so in honor of the Chiefs whipping up on the Texans here is the second-to-last card I had on my needs list for my '61 Fleer build. 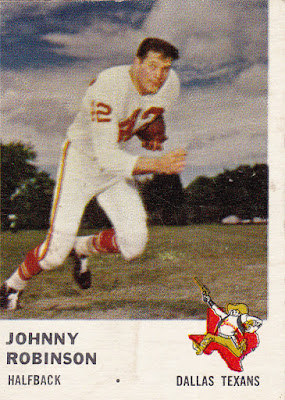 Hall of Famer Johnny Robinson's rookie card has been a pain to find in nice shape at a decent price. I really can't figure out why it's such a costly card. Then again, I guess I've already answered my own question... HoF+rookie.

You'll note that the Chefs were originally the Dallas Texans. So this evening we have the NFL kicking off with the current vs former 'Texans' clubs. I gave up my Texans season tickets this year. I'd owned them since the first day they were available back in 2001. I simply got tired of throwing good money towards a franchise that doesn't seem to be intent on winning.

Add to that the fact that in 2019 they awarded a grant to one of Houston's biggest private health clinics, one that serves many in the minority and gay communities in Houston, most for little or nothing. But when the owner found out about who his board had awarded the grant to he refused to allow the founder/CEO on to the field to accept the check. they mailed it to her. She happens to be one of my wife and I's closest friends, an incredible woman, and a Texans season ticket holder herself. That soured me on the organization.

As I type this the Houston Texans are getting their asses kicked by the former Dallas Texans. I'm not upset.

the last card for this fun set that I needed was the Don Meredith rookie. I landed it last week. The seller finally shipped it yesterday. I can wait. It'll be fun to put this thing to bed.