Well, the asterik should tell you how the 'show' went. Honestly, Darryl, the show promoter, did a good job with it. He mandated masks for everyone, reduced the tables by eliminating all but the ones around the walls of the room, and limited to crowd to 20 (or at least he tried). He told me that when he opened he had 45 folks waiting to enter. It's been a long time since we've had a show in the area so i was kind of expecting that. I waited until 10:30 to arrive. 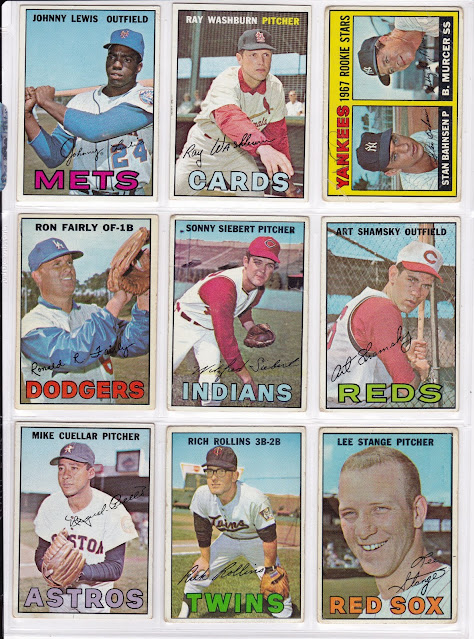 And I only ventured about three feet into the room. That's not unusual for me. I normally only hit Darryl's tables and sometimes one or two others that have vintage stuff. Yesterday I poked my head in, Darryl handed me his 1967 Topps boxes, and I spent about two hours at a table in a corner the hotel  sorting through them. I'd finally gotten around to getting my 67s organized and correctly checklisted. I had my wants and needed upgrades listed and I went to town on those boxes. I came away with about 130ish commons which knocked a real big hole in my wantlist.

Some of those commons filled holes in that page I've posted above. I randomly picked it to scan and I'm glad I did. It contains a number of players I was interested in during the mid- to late 60s. Ron Fairly, Sonny Siebert, Art Shamsky (until October '69), Rich Rollins and Bobby Murcer all fit that bill. Of course Mike Cuellar is an all-time favorite of mine.

And then there's Ray Washburn. He's the guy who told my younger brothers to 'go to hell' when they asked him to sign a program for them in the Astrodome. From a previous post I made:

In the 60's and 70's the Astrodome had a restaurant they called the Domeskeller (sp?). It ran along the outfield wall under the bleachers. They had picnic style tables tables and wire windows you could watch the action through. Before games fans (mostly kids) would congregate there during batting practice as pitchers did their running on the warning track. They would sometimes sign through the opening in the wire.

Anyway, one Sunday afternoon in 1968 my younger brothers asked Ray Washburn of the Cardinals to sign their program. He clearly and loudly told them (and me) to 'go to hell'. We told my folks when we got back to our seats. My mom was pretty upset as I recall but I think my father was more amused than angry. Either way Washburn's career slid off the rails after that season. Karma.

Even with my limited view it looked to me that the dealers in the room were doing good business. Darryl likely lost money on the room by having only half as many dealers but he's got another show scheduled for next month. I think he's undecided on going through with it. We'll see.

That's all I did at the show. Darryl himself had hardly anything on his table (he usually has several full of vintage) but he was too busy policing to sell anything anyway. I sure hope things get better soon. This (very much needed) mask and distance business is getting old.

Posted by Commishbob at 4:57 PM