OK, so yesterday was supposedly Labor Day. Honestly, ever since I retired, every day is a holiday. But to the point of this post.... 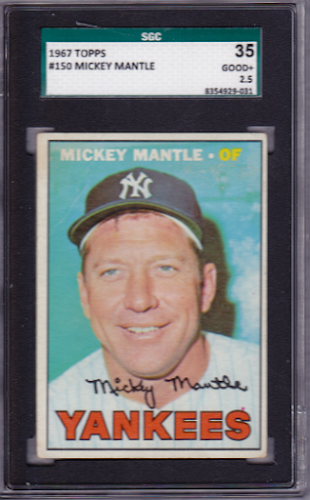 ...growning up in North Jersey Labor Day marked the last day of summer. School was going to start the next day. More often than not there was a doubleheader at Yankee Stadium and my father and I were there. That usually meant seeing Mickey Mantle. But with his injuries, you couldn't count on it. Lots of great memories from those times.

I'm slowly meandering my way through the 1967 Topps set. I'm not in a hurry for several reasons, not the least of which is that my main supplier of 60's Topps cards has been my friend Darryl who runs the hotel card shows. Of course, those shows.

Not having those shows meant that every card I picked up probably cost me more than I would have spent on nicer cards from Darryl's boxes. That's all about to end as the hotel shows are returning this month. There are going to be the expected precautions in place, and I'm going to have my work cut out for me convincing my wife that going to a show is a good idea.

But I'll get there. I usually just get a box from Darryl and go sit in the lobby and pull cards anyway. One card I won't need to look for is the Mantle. That one up above arrived not long ago. Perfect for my needs. It is in reasonably nice condition and didn't cost an arm and a leg. Even better I used an eBay coupon for $25 off and I had been gifted with some cash in my PayPal account from the guys in my fantasy league. With the uncertainty of the season being played all the way through I had decided not to charge the usual small fees that cover the league hosting site. draft night groceries (no in-person draft!) and a trophy. But my guys sent some money my way anyway. More than I usually collect.

That made the Mantle nearly free. And free is good. Especially since the '67 set has so many high dollar, high number cards.

That's a lot of words for just one picture so here's the back: 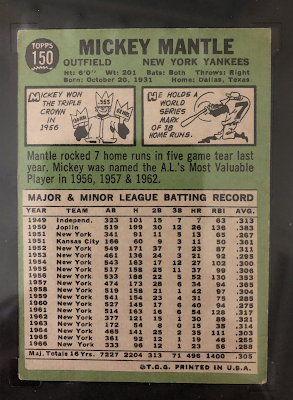 Those are phone pics, my scanner hates slabbed cards more than I do. Mickey will be able to breath very soon.

BTW..this is my first time dealing with the 'new' Blogger. It sucks, but it doesn't suck as bad as I thought it'd suck. Thank goodness for small favors.

Posted by Commishbob at 8:32 PM