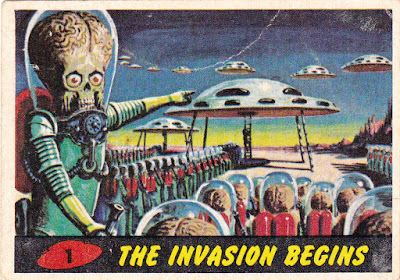 Well, it's nice to know that our government has the money to start investigating UFOs while unemployment is at 10%, but whatever.

I guess I'm one to talk. I just spent too much on the crown jewel of the 1962 Topps/Bubbles Mars Attacks set. Card #1, The Invasion Begins, is a tough one. Many suffer from the common 60s card issue of having been the top card in a rubber-banded stack.

Then again, 'too much' is a relative term. I see graded copies of this thing going for silly prices. I was able to finagle some PayPal funds I'd earned to reel it in for under a hundred. Yeah for me. It's in pretty good shape. Better than some others I have in the binder.

Here's the back...and the backstory: 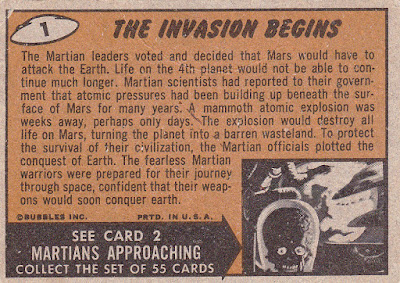 Small nick in the upper corner is fine by me. This isn't the last card I needed, just the spendiest of the final few. I nabbed the last couple over the last day or two by going 'off the grid' and finding some card stores that were on the net but were not eBay! Imagine that.


This one, #39 Army of Giant Insects, makes me laugh. If you've spent much time in Houston you can relate to this scene. this came a week or two ago. But it didn't help my list shrink. I realized after it arrived that I had one in my binder but I had failed to cross it off my want list. Sure, tell me you've never done that. 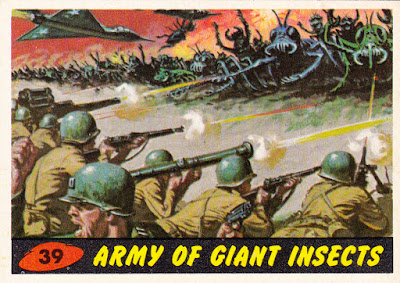 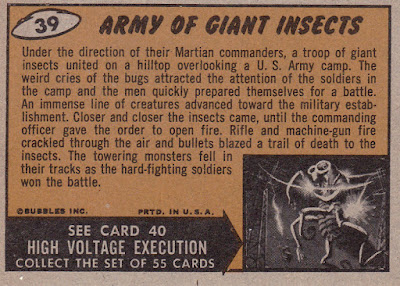 I'll be back with the last two cards for the set next week. try and curb your excitement.


Of course, that's not counting the five that are sitting at COMC with an expected shipping date of sometime in 2023.