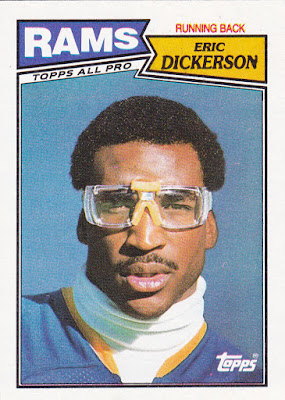 I've been spending quite a bit of time lately putting together Topps football sets from the 80s. It's my favorite NFL era despite the fact that the Colts bailed in 1984.

I showed the '86 set a month or two back. That will always be my favorite 'modern' Topps fb set. But the follow-up, the 1987 set ain't bad. Topps matched team colors to the cards (mostly), and they could show helmet logos and all that. The flag design element leaves room for a large player pic. I wouldn't call it 'inspired', but it's grown on me. And, hey...Eric Dickerson appeared in those ultra-cool goggles. 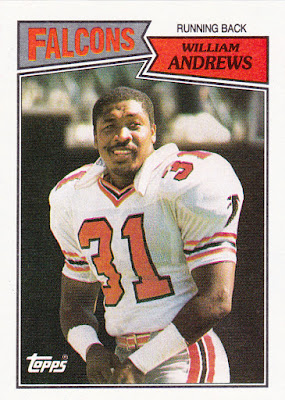 I put the William Andrews card here because those Falcon uniforms were amazing. So good, in fact, that I insisted my teams wear similar ones. I got laughed at. 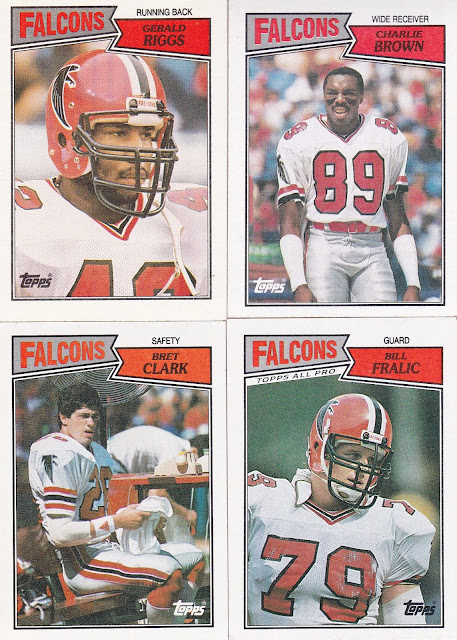 Nice, right? OK, maybe it's just me. But I love the color combo.


Only the Chargers were close. 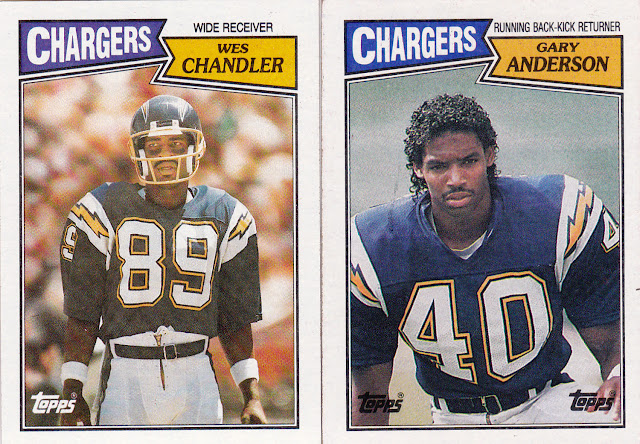 The set runs to 396 cards including the two checklists which finish it off. Topps used the team-by-team format as they had in '86. Teams are in order of the '86 season records, from the SB Champion Giants, through the other playoff squads, and on down to the 2-win Bucs.

The 80s were a star-laden time in the NFL and obviously, they are all here. Joe Montana on the headset. I used to have a collection of 'Guys on the phone' which showed players using electronic devices, bullpen phones, headsets, microphones, etc, and this was part of it. 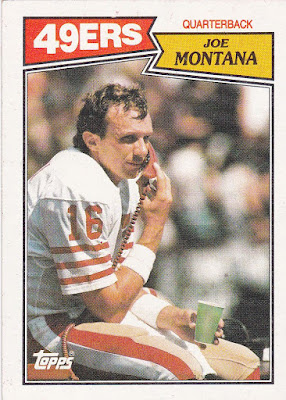 All-Pro players like Jerry Rice got a designation under the team name. 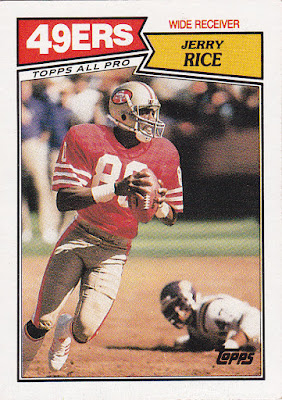 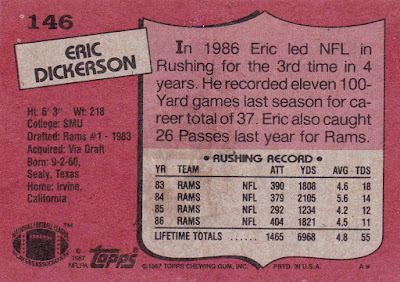 The set starts off with a Super Bowl tribute card saluting the Giants' win the previous season. 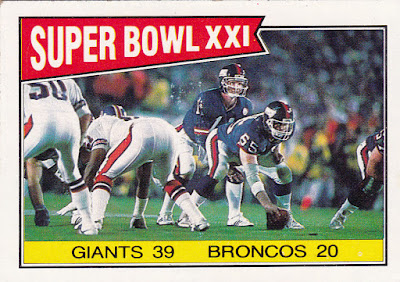 Then we get seven Record Breakers. 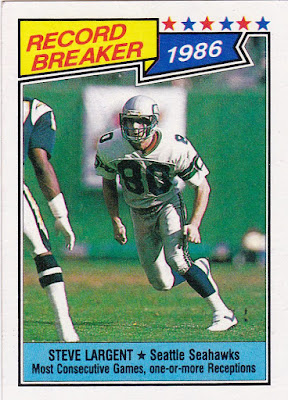 Then it's on to the teams. Each gets a highlight-type with a checklist on the reverse and then players presented by position, quarterbacks, running backs, receivers, and on and on through the DBs. Occasionally a team threw Topps a curve and they had to adjust. 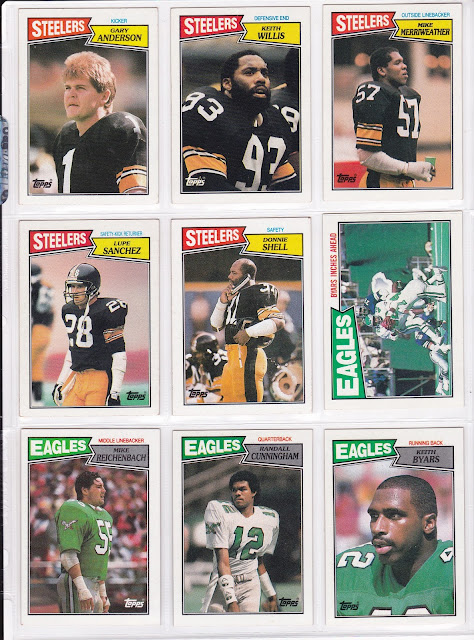 In the case of the Eagles, LB Mike Reichenbach takes the spot that would have belonged to Ron Jaworski. Jaws was winding down his playing career and had been released by Buddy Ryan between the time this set was planned and the time it was executed. You may also notice in the scan above that the Steelers only had four defensive players on cards. No more Steel Curtain buy 1987.

There were five Leaders cards. In this case, we have ED and Curt 'The Other One' Warner. 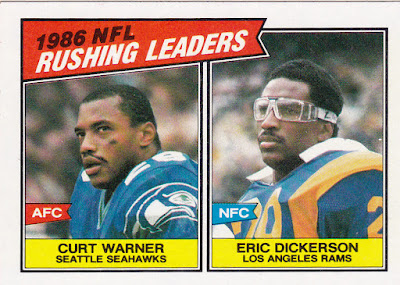 Interesting cards are scattered throughout. 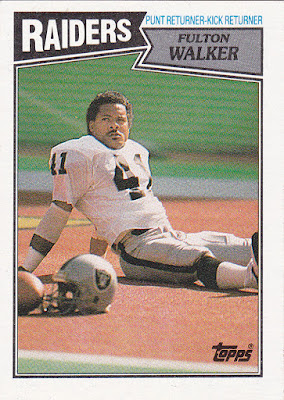 You don't see many choreographed pre-game stretch cards these days. 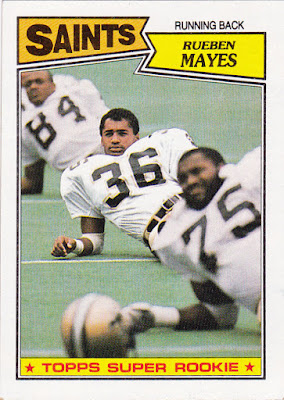 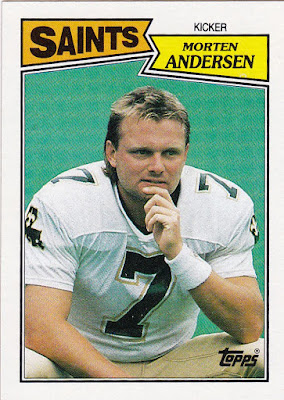 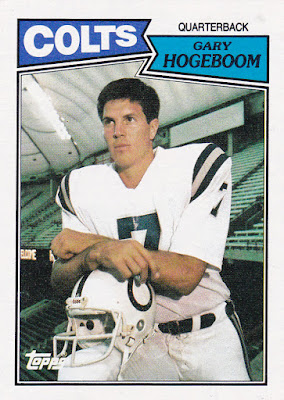 Man, the Colts' lack of talent at QB between Bert Jones and Peyton Manning is displayed right here. But by this time I was happy to see it. 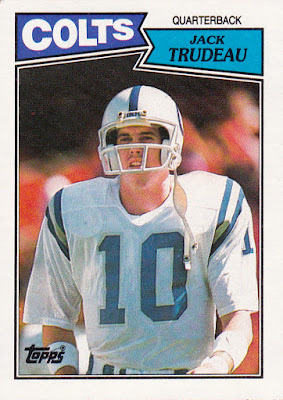 Here is the optimally-named Chuck Long. 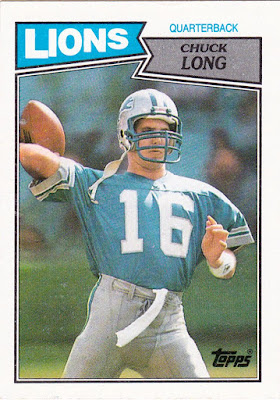 Mark Malone was entering his fourth year as the Steelers' starter and his 29th year of looking like a Hollywood type-cast badass. 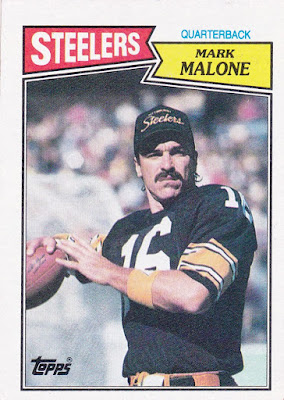 Topps had a few guys designated as 'Super Rookies" including my man, Ernest Givens. 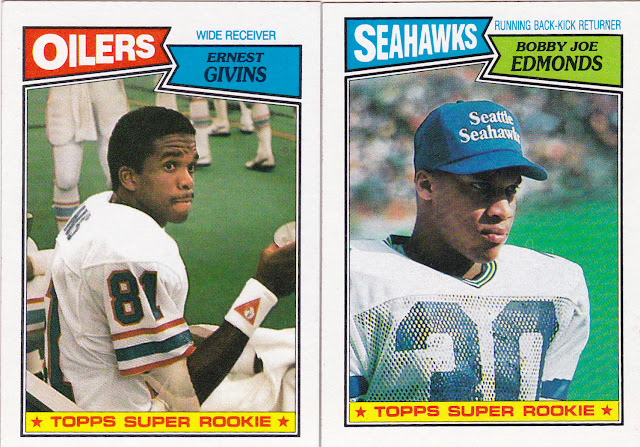 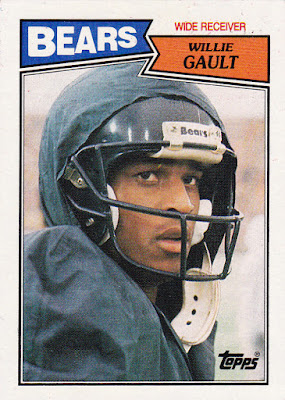 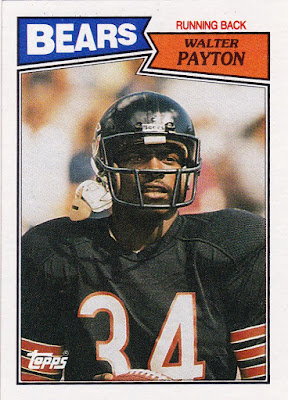 And Lawrence Taylor, a guy whose personal life drags down his legacy as the best defensive player I've ever seen. 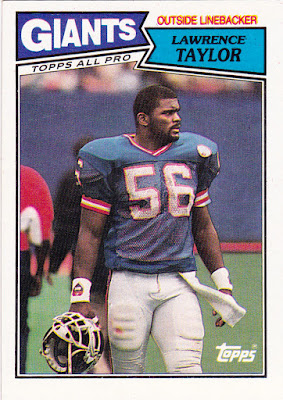 As they did many times, Topps had an insert that featured the 1000 yard runners and receivers of the previous seasons. 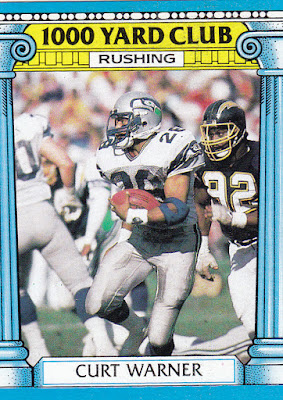 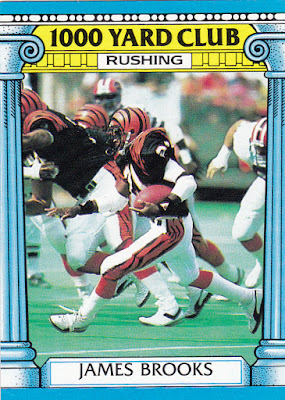 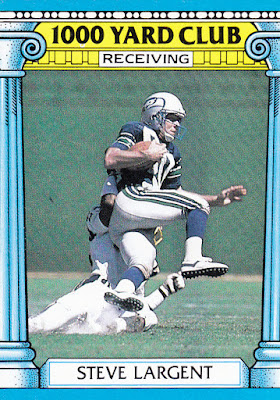 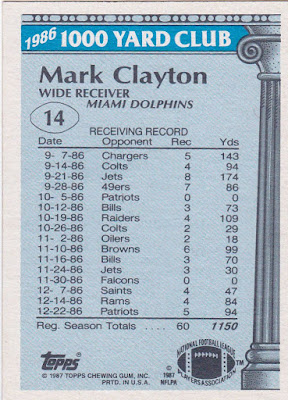 I picked this one up cheap. I'm kind of surprised at the fact that sets from the late 90s cost much more than this one. Chalk it up to overproduction.
Posted by Commishbob at 10:30 PM