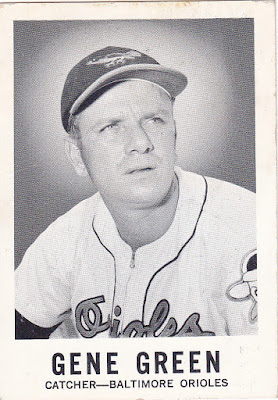 The last brick in the 1960 Leaf set wall has been put in place thanks to my long-delayed COMC delivery. I bought this baby in March and I'm happy to have it in the binder today.

I had a few other needs in the set when I nailed down ol' Gene here, but they all came months ago thanks to eBay and the very generous gifts I received from a Twitter acquaintance, Talmer Curry, who dropped the last of these jewels on me.

Green was a long-time Cardinals outfield prospect who finally made the majors in 1957. In his career, which spanned all or parts of seven seasons, he had the distinction of leading both leagues in Grounding Into Double Plays. He was a regular in the outfield for St. Louis in '58 and hit .281 with 18 doubles and 13 homers.

In December of 1959, after his playing in just 30 games, the Cards traded Green to the Orioles for smooth-swinging outfielder Bob Nieman. Green by this time had taken up the tools of ignorance as a big-league side hustle. The photo for this card must have been in Spring Training of 1960 because Green spent the season at AAA Miami before being called up in September.

He played right field against the Senators on September 23, a week or so before the end of the season. That game, those four at-bats (a ground out, a single, and two pop-outs, one of which ended the 4-0 O's loss) are his only appearance for the Birds. After the season he was left off the protected list and was taken in the expansion draft by the new Washington Senators.

He was the Nats' regular catcher in 1961 and he had another good year fueled by frequent work as he hit .280 with a career-high 18 homers.

Sports Illustrated had a story about the expansion Senators in '61 and Green rated a paragraph:


Gene Green, an outfielder and reluctant catcher with the Cardinals years ago, is now, at the age of 38, a more enthusiastic pupil of catching under Coach Rollie Hemsley. His strength, though, is at the plate, not behind it.


He moved on the Indians and (briefly) the Reds for a bit before leaving the game after the '63 season. He was only 47 when he died in 1981.

Poking a bit down a Google rabbit hole I found that Green is a member of the Rochester Red Wings Hall of Fame. From their site:


Outfielder/catcher Gene Green played three seasons (1956, 1957 & 1959) with the Red Wings. One of the best players to play for Rochester during the Cardinals era, Green helped lead the Red Wings to the Governors’ Cup championship in 1956 while batting .300 with 23 home runs and 96 RBI. Green, a two-time International League All-Star, finished his Red Wings career with 62 home runs and 254 RBI in 371 games.


Looking at his listing on the Trading Cards Database I realize I have an entire run of Gene Green's major release cards. Which is something I guess.  His rookie card came in the '58 Topps set: 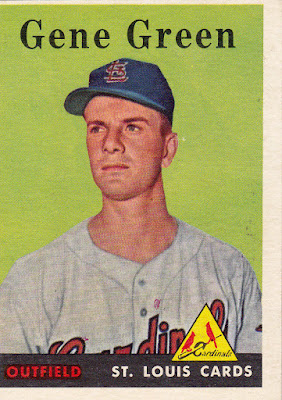 Green got a pink one in '59. Outside of the black cards, pink ones are my favorites. 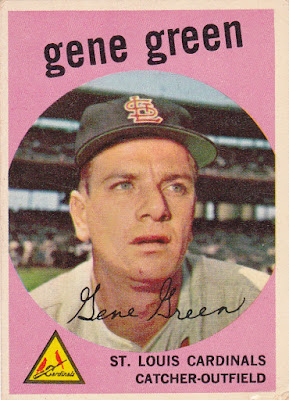 I haven't posted his 1960 card on that blog yet but it's coming up before too long. That's the Polo Grounds behind him on both the '59 and 1960 cards.  Same photo session, even the folds in his jersey are identical. 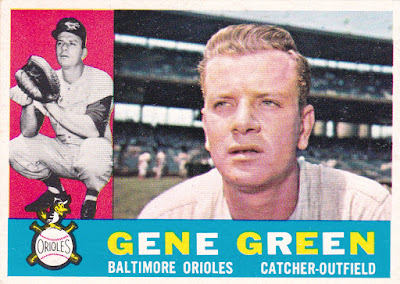 Here's his 1961 Topps card. Probably a photo from 1960 Spring Training since that appears to be an Orioles road jersey. The Cards didn't use the piping like that. 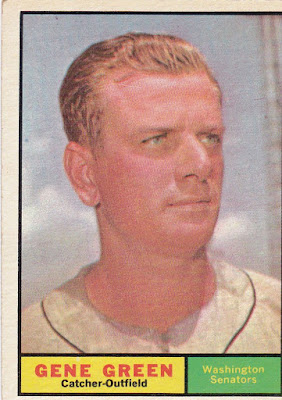 In '62 Topps added a 1B listing to his card. That's strange because he'd yet to play a game there in his career and he was unlikely to push past Tito Francona for the Tribe's 1B job. He had two appearances at first that year. 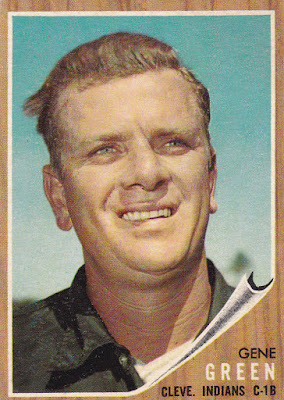 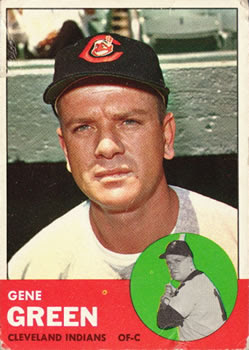 If you are a 'card back geek' you can decide for yourself which of the sets from those years you prefer. I'm a 1960 back fan.

I picked up some other fun things in the COMC delivery. I also have ventured into the murky waters of SportsLots and came away in one piece, if a little bumfuzzled by their arcane website. I'll toss those up here in the next few days.

Posted by Commishbob at 7:48 PM