'62 Mars Attacks, I bet Sister Claire still has mine

I spent most of my elementary school years at St. Mary's in Nutley, NJ. The church and parish are still there but the school building I spent so many hours in and around is now a privately run school for young people with special needs.

I've mentioned the place here previously and showed the ramp which was our card flipping backdrop. Lots of good memories and stories for sure. My friends and I  collected more than just baseball and football cards.

Over the last few years, I've set out to collect (for the second time ¯\_㋡_/¯ ) the non-sports cardboard that so fascinated us. I've succeeded in finishing the Batman and Civil War News sets. I'm working sloooowly through the more-complicated-than-it-needs-to-be '67 Soupy Sales set. And I'm really within range of finishing this beauty, the original 1962 Bubbles (aka Topps) Mars Attacks set of 55 cards. 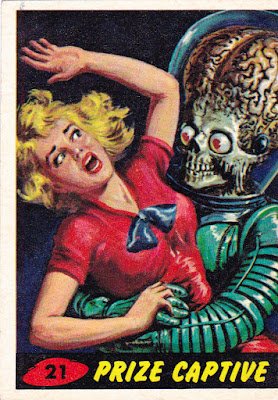 Cards were not necessarily against the rules at St. Mary's. You just needed to keep them out of sight during instructional time. LOL Fat chance. I had my share of cards taken up by the lay teachers and, particularly, by the nuns, the Sisters of (not much) Charity. Baseball and football cards were returned to us (usually) at the end of the week with a warning that the next time we wouldn't be so lucky. But getting nailed shuffling through your stack of Civil War News or (gasp) Mars Attacks cards meant you could kiss those babies adios. If you were living right (and had a teacher that wasn't wearing a habit), you knew they were gonna get trashed. If you were caught by a nun...well you got to watch her tear them up and then had to endure a shot from her yardstick or long, wooden pointer across the arm. 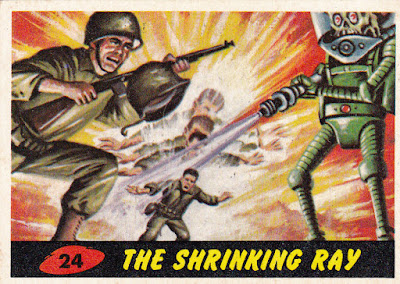 But I'm getting too wordy here. My set chase began back near the first of the year. My goal was to put together a presentable set without going nuts on price. And that isn't easy with the Mars Attacks set. These things get pricy quick. I've picked up 45 of the 55. I have been able to gather most of them in the $14-$18 range. I've done that by ignoring the fact that many are off-center. But now the available cheapies are picked over. I get lucky from time to time but the last few I've obtained were in the $20 range with a few closer to $25. 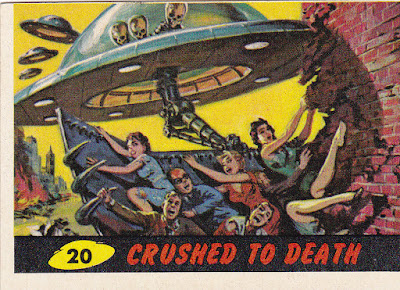 Card #21 is reputed to be the hardest to find other than card #1. It certainly is priced that way. Here's something else I found interesting..Topps, according to the Heritage Auction site, used the 'Bubbles, Inc.' 'imprint' when they were publishing a set that they thought would be viewed as controversial. I'd wondered about that and had never heard that explanation of it. And it makes sense.

The backs of the cards contain the narrative for the artwork on the front. You'll be relieved to note that, according to the back of card #21, the young lady in the clutches of the Matian was able to escape. 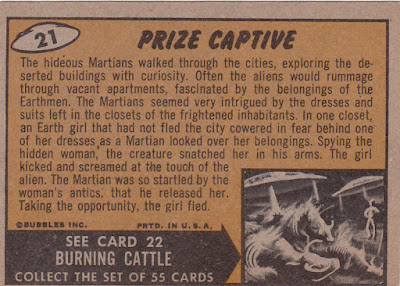 The project was conceived by two giants of the card industry at the time, Woody Gelman and Len Brown. The illustrations were drawn by Wally Wood and Bob Powell and were then hand-painted by the great Norm Saunders. That same crew, more or less, was also responsible for the Civil War News set which was completed in 1961. Everything you could ever want to know about the Mars Attacks set, and more, can be found here at the Old Sports Card site. 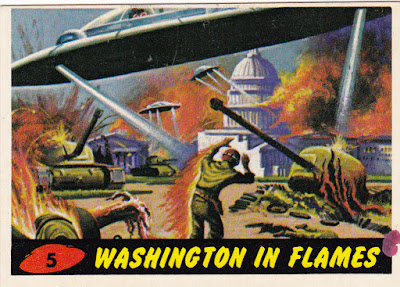 These are two scans of the same card. I bought it with the notation of  'stained' from the seller. When I pulled it from the toploader to scan I noticed that the 'stain' was some gum or candy residue which flaked right off without a trace. When it comes to building this thing I'll take whatever break comes my way. 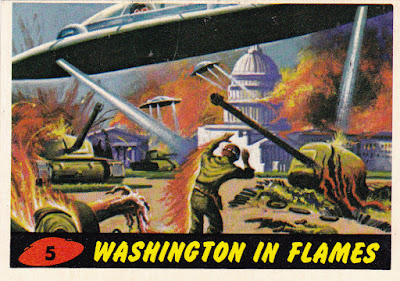 BTW.. you can use the title of #5 here to make up your own joke.

My needs list is over on the right-hand column. I'm figuring that card #1 will be the final card to hit the binder. Then again, considering that I've had cards from this set sitting at COMC for months without any indication if they will ever be shipped, card #1 may be yellow and brittle before I finish loading pages.

I'll save my 'Why does COMC send me multiple emails every day about their auctions if they are too locked down to ship?' rant for another day.

And speaking of Mars Attacks... Kickstarter, along with Topps, is issuing another crowdfunded Mars Attacks set next summer.  I'm a backer and the previews look fantastic. I figure its 50/50 on whether that set is in my hands before the '62s I have at COMC.
Posted by Commishbob at 7:46 PM