I recently received this neat package of cards and such from P-Town Tom of the Waiting 'til Next Year blog. Without intending to he hit my latest collecting interest, the St. Louis Browns. Ever since our July trip to the Orioles' former home I've been picking up small, inexpensive items like Browns' pins and Bowman commons (is every Browns card a common?). I've also gotten into the one Bill Veeck book I had missed, The Hustler's Handbook.

Probably the sweetest item Tom sent was this Exhibit card of Browns' (and Yankees) first baseman George McQuinn. McQuinn's story is an interesting one and his SABR bio is worth the time. He had back issues that kept him out of WWII but also limited his career as a ballplayer. But he did have a late career resurgence with the '47 Yankees and helped them to the pennant that season.

As for Exhibits...I'm about to the point where I need to have a dedicated binder for them. 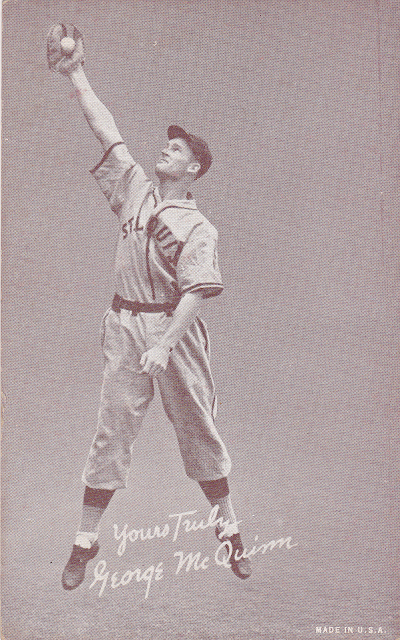 I received a much-loved 1950 Bowman of Les Moss. I knew him as the Astros' pitching coach in the 1980s when he worked with some of the games best, Nolan Ryan, Mike Scott, and so on. He was a baseball 'lifer' who was involved in the game into his 80s. 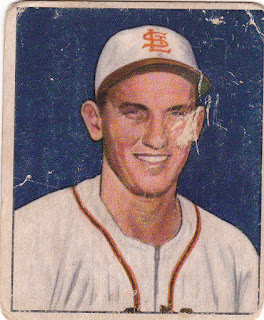 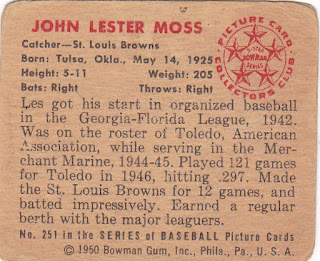 Tom included some neat Topps insert items. This is a 1966 Topps Rub Off of Milt Pappas. If you know anything about these you know that finding one that is even close to being 'centered' is difficult. This SCD story hits on that very point. I hadn't realized that there were 100 different players included in this insert set (plus the pennants). This Pappas joins Brooks Robinson as the only Orioles I own. 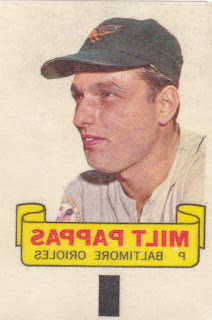 More inserts...Topps Deckle Edges of Brooks and Boog Powell. I'm actually collecting this set. There are always a few in the oddball box at the hotel card show and I always grab them. I don't even have a checklist/wantlist put together but I will at some point. With the addition of these two Birds I can keep the ones I own in my Orioles player collections and add these to the set collection. 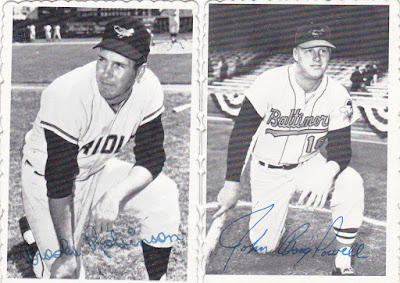 Here is a 1956 Topps Thomas Jefferson. Topps updated/revived the set a few times in 1972, it's always been a classic. This TJ is a bit the worse for wear, but he's just fine in my Presidential card binder. My goal is to complete the run of presidents in a kind of Frankenset way. 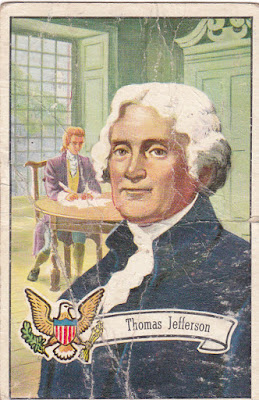 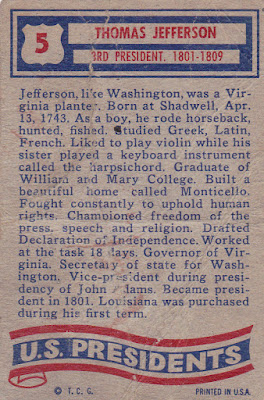 Fleer action stickers may not seem too exciting but these things bring back memories. My sons loved decorating a file cabinet we had in the garage with these babies. AL teams went on one side, NL on the other. The cabinet and many of its stickers, is still there. Tom sent me a few and these are going on the spines of Orioles binders. 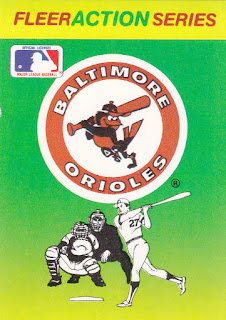 Thanks again, Tom. I always enjoy reading your blog. And I got to witness your guy, Dan Vogelbach hit a seriously impressive homer a few weeks ago against the Astros. I immediately thought of you.
Posted by Commishbob at 1:52 PM