Taking One (or two) For The Team...plus St. Louis

I really don't like buying stadium giveaways but sometimes you just have to hold your nose (with one hand) and pull the trigger with the other. Case in point:

The Orioles had a Brooks Robinson bobblehead giveaway recently and my son Brooks, while not a collector, does have a few Brooks related items that he displays in his office at work. Since the giveaway almost fell on his (and his brother's) birthday I figured one of these would make a neat gift.

Of course, I needed one for myself as well 😇 so I pulled the trigger twice. They both arrived within a couple of days of the July 19th giveaway and mine is now displayed here. 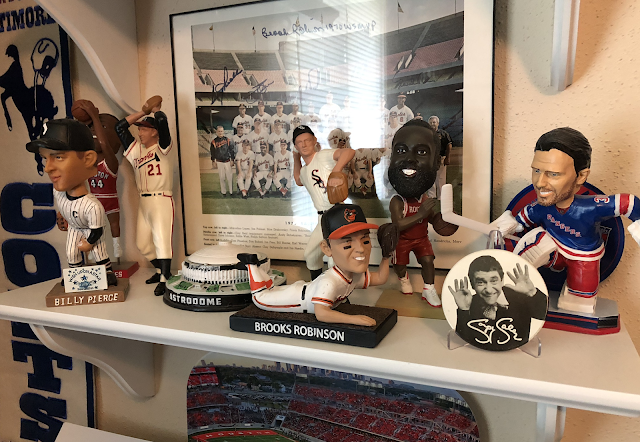 I mentioned in my last post that we had traveled to St. Louis to help my best friend celebrate a milestone birthday. We had last visited a few summers back as we passed thru on our way to Chicago but this time we had five days to enjoy one of my favorite cities.

Here are another couple of pix of the vintage baseball game that was in progress under the Gateway Arch on Saturday morning. One of the younger players spotted my wife's Astros shirt and came over to talk. He was a Houstonian working in the area.

STL is a great town for food and a trip isn't complete without a stop (or two) at some of the wonderful Italian spots on The Hill.

We took in a lot of the sights during our stay but I'll (mostly) stick with the baseball highlights for this post. I do need to mention that I can testify to St. Louis being home to some nice brewpubs. We hit our share. 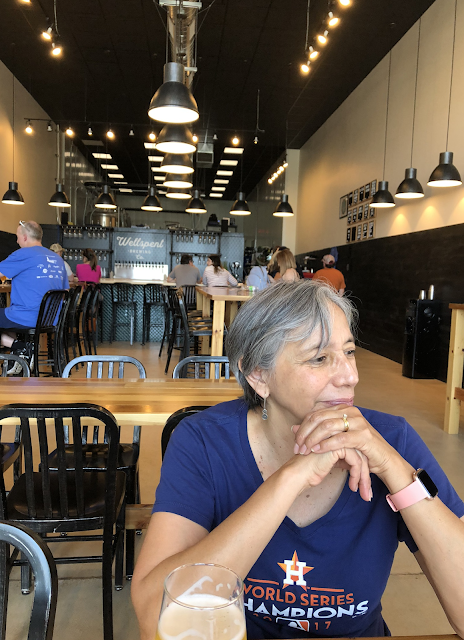 My first time in St. Louis had come in 1974. I dug up the photos I had from that trip and here is a bit of now-and-then that span exactly 45 years.

Took the above pic from the steps of the Old Courthouse near the Arch last week. Below is a shot from nearly the same spot in July of 1974. 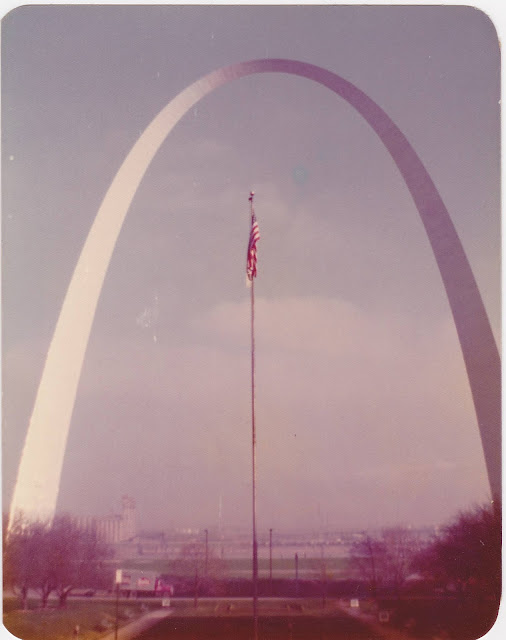 It was a bit misty on Monday thanks to the outskirts of TS Barry but the trip to the top of the Arch was fun anyway. One of our group bailed out when he saw the size of the elevator 'cars' that get you to the top. I will admit I wasn't so sure about going up either. I hadn't remembered that claustrophobic ride from 1974. 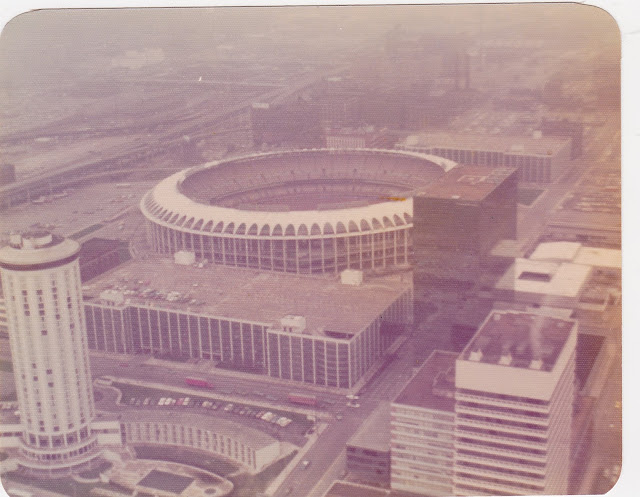 After a couple of near misses thru the last few years, I was determined to get to a game in Busch Stadium. The weather was fickle and I had my doubts but it turned out fine. Sam and I 36 years, one month after he was the best man at our wedding. Oh, and Gibson.

Yes, I'm wearing a Cardinals cap. The things you do for friends, amiright?.

Busch is a really sweet stadium. The upper deck seems waaaay up there. The pics don't convey that as clearly as being there. I think they went 'up' rather that 'back' to gain enough seating given the smallish footprint they had to work with. In any case, it's a great place to enjoy a game. The mist stopped and the sies cleared after a couple of innings and the night turned out great.

My only quibble might be that the scoreboards are a bit much. Lots of stuff up there.

My wife and I had some really great seats. 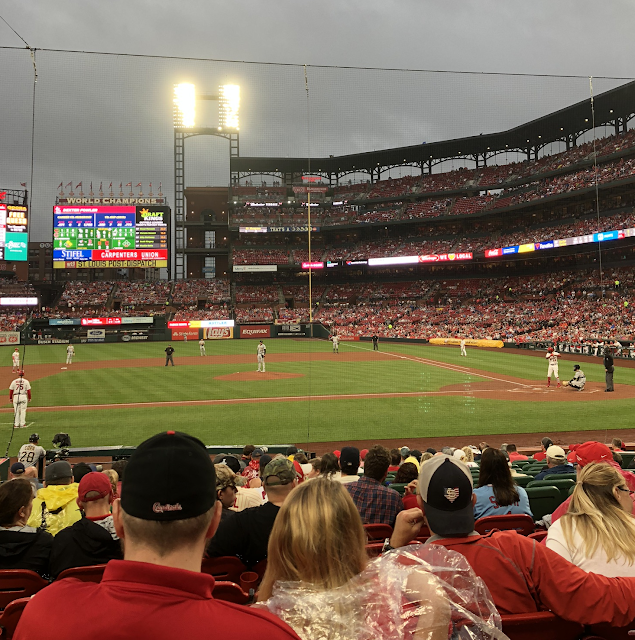 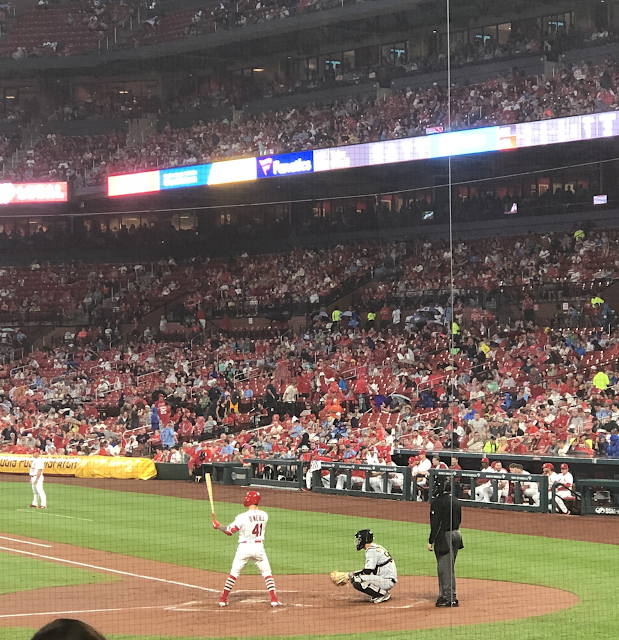 But mid-game we headed out to join all the rest of the group in the bleachers. Postgame fireworks for a nifty Cardinals win. 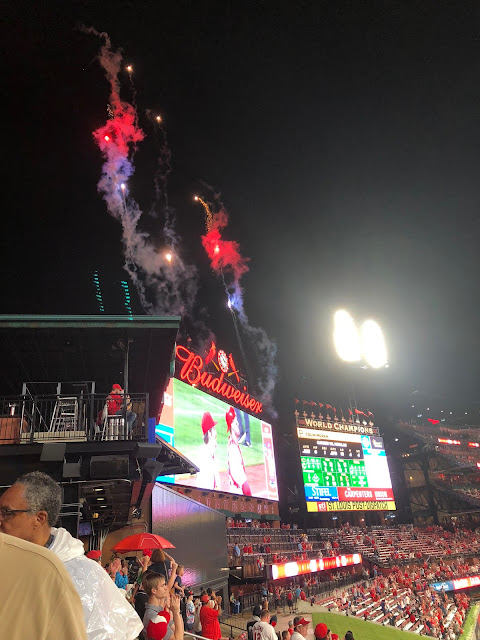 If you've never visited St. Louis you're missing out on one of America's great cities. I'm looking forward to returning. 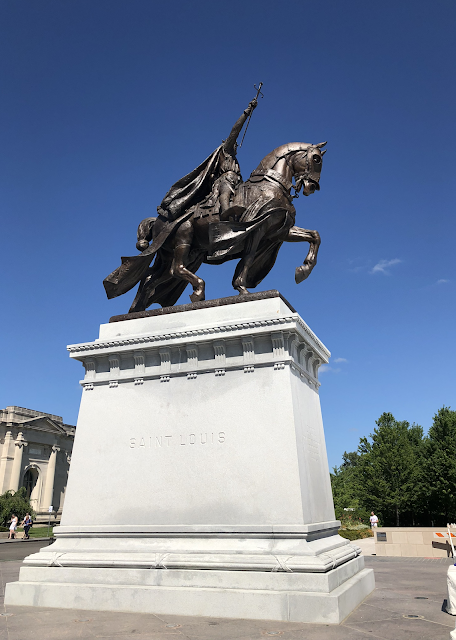 Posted by Commishbob at 7:13 PM