Did the title throw you? This is NOT about politics, it's about cards from Joe Shlabotnik. Nice ones, too.

But there is a president involved. JFK led off the thick manila envelope that arrived from Virginia this week. He appeared on a Topps and an Upper Deck card, both new to me. My presidential binder is going to have to be upgraded to a 4-inch model soon.

In this Topps Opening Day card, JFK is tossing out the first ball, not at an Opening Day but at the '62 All-Star game as LBJ watches. 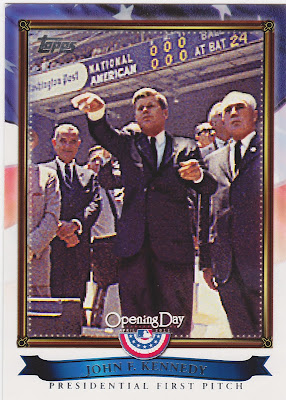 Here is the UD from their 2012 Goodwin Champions set. These are really, really well-done cards. 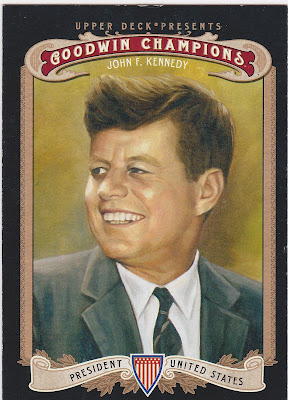 Also in the package from the same set was this addition to my actress/actor stash, the beautiful Carole Lombard. 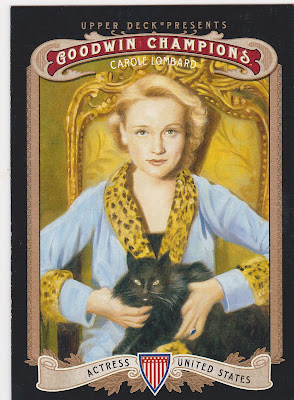 She was the queen of the 'screwball' comedy craze of the 1930s and was reportedly the highest-paid star in Hollywood. She was killed in a plane crash outside Las Vegas in 1942 while returning from an appearance to promote war bonds. She was 33 years old.

Of course, Joe included some Orioles cards, new to me, of players known and obscure. I like the design of this '94 UD Miggy Tejada more than anything being produced these days. But, then again, I'm an old fart and prefer the less flashy designs. 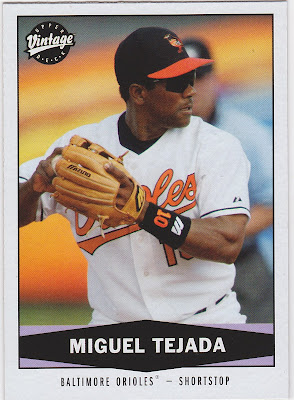 I grouped these Bowman/Topps/Paninis together but the scan came out smaller than I thought it would. If you can't tell there are a couple of Trey Mancini cards in there. I'm accumulating a lot of his cardboard. Odds are he gets dealt to a contender this week.

This GQ Palmer looks very familiar but I didn't see it in my quick look thru the binder where it should be so maybe it's new to me. 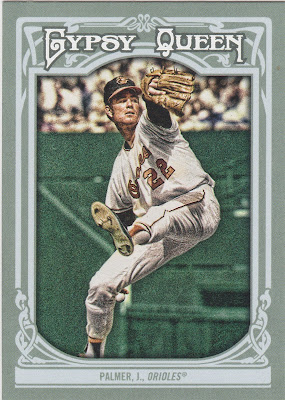 But the stars of the bunch were these terrific '57s! Joe knocked close to a dozen off my needs list. 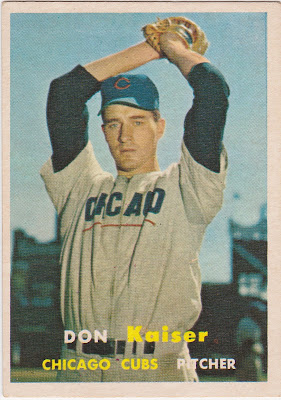 Don Kaiser is the first of what is a Chicago-heavy group of cards from Joe. He was 6-15 over parts of three seasons with the Cubs and '57 was his last in the majors.

When I was a kid I often heard the 'Moooose' call at Yankee Stadium. I just love this card. Nice to get it as a gift so I can avoid paying the 'Yankee tax'. 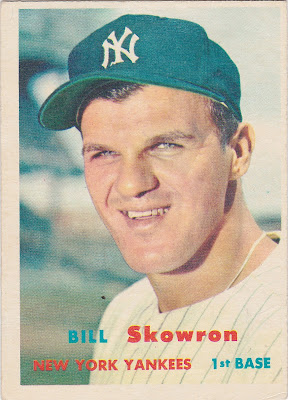 He has a Chicago connection as he was a native of there. If you think 'deep dive' stats are a new thing, check out the blurb on the back of Moose's card. 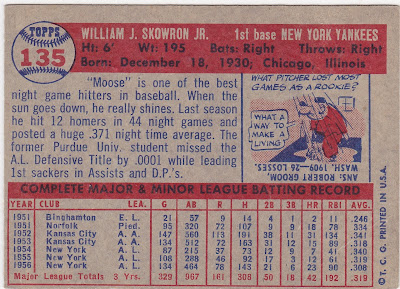 Harry 'I'm NOT the guy from Night Court' Anderson in Connie Mack Stadium. '57 was his rookie year and he got some scattered MVP votes after hitting at a .268 clip. 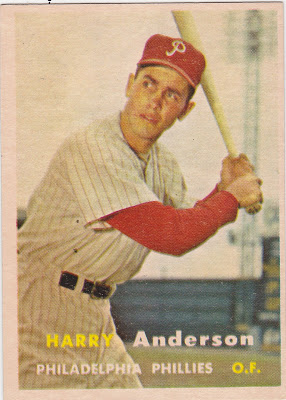 Dick Donovan had a fine season in 1957 and finished second in the Cy Young voting to Warren Spahn. OK, Spahn got 15 of 16 votes and Donovan got the other one, but still. 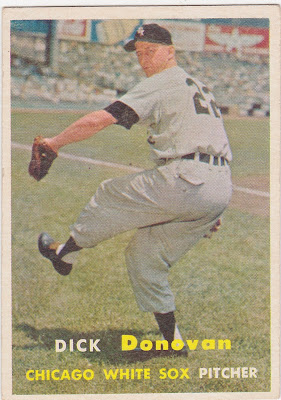 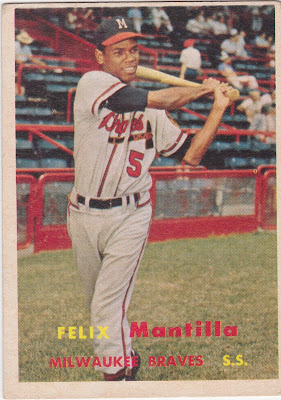 Willard Nixon practicing his look to first. He was in his eighth of nine seasons in the bigs, all with the Red Sox. 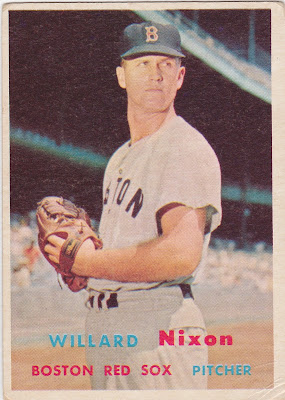 Ron Negray had fought his way up the steep Dodgers minor league system and then got dealt to the Phils. After a couple of years there ('55-'56) he was traded back to the Bums and was again in their system when this card was being pulled from packs. 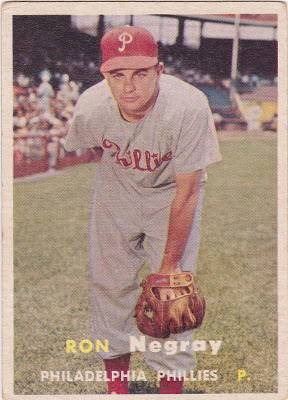 Ray Jablonski looks and sounds like a tough Chicago dude. He also looks like a guy painted into a Cubs uni after being pictured as a Redleg with whom he'd spent the previous two seasons The thing is, he never played for the Cubs as they traded him to the Giants a day or two prior to Opening Day in '57. 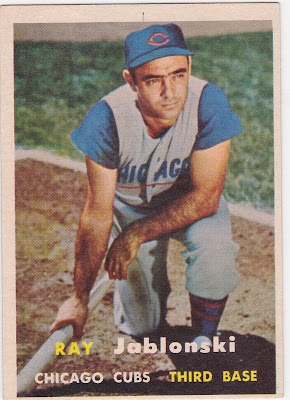 Interestingly, his Baseball Reference thumbnail photo shows him in a Cubs cap.

Showing the back of his card here because I love the backs in this set. 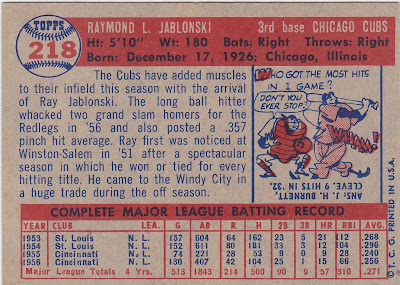 Speaking of the Cubs...doesn't Jim King look like dozens of other players from the 50s? He also was on another team for the '57 season. The Cubs had dealt him to the Cardinals during the first week of the season. They had taken him from St. Louis in the Rule 5 draft two years prior. 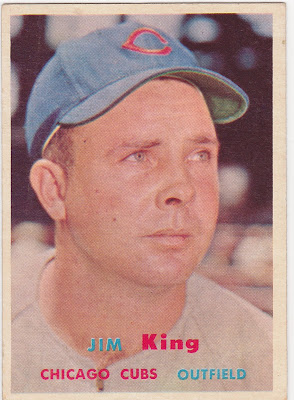 And then there's Dixie Howell. He had begun his pro career in 1938 in the Cleveland organization and here we are, 19 years later,  and he's in his fifth big league season. He had done a LOT of pitching in the minors. He returned to the Sox in 1958 but saw action in only one game and spent that year and the next back in the minors. At the age of 40, in the Sox spring camp in March of 1960, he suffered a heart attack and passed at 40 years old. 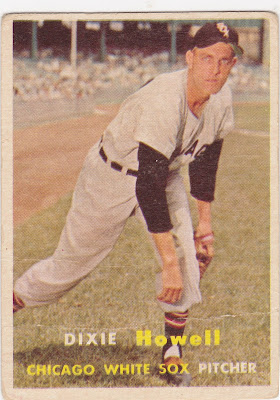 There was another card in the bunch from Joe, a common, but one with an interesting quirk that I thought would make a good stand-alone post. That's coming soon.

Again, thanks Joe for a great envelope full of Orioles and '57 set chase cards. It's a much appreciated boost at a time I was shoving the hobby towards the back burner.
Posted by Commishbob at 10:57 AM