I've been 'offline' for a bit. No posting and almost no reading so I have to get up to speed here. I have a couple of way overdue thank yous to send out to bloggers/friends who gifted me with cards over the last month.

First up is a 'foodie' variation, an Utz version of the Topps 2019 Trey Mancini card that came from 'friend of the blog' and Twitter mainstay, Mark Hoyle. Utz Potato Chips is an east coast brand that put packs of these (4 to a pack?) into chip bags or multi-packs. I read that there were 100 Utz-branded cards. It struck me that if someone didn't want to deal with collecting the whole Topps flagship set and the extraneous stuff that comes with it that nabbing the Utz cards would be a neat alternative.  All riff, no raff. 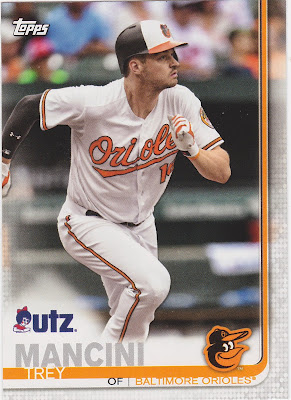 Thanks, Mark. In my neverending effort to have as much variety as possible in my fantasy league binder this one will make a great addition.

Another bunch of cards came from Night Owl. As is usually the case with envelopes I get from Greg, it contained a wide assortment of stuff. All of it fits into one of my collections or another.

First up..a '57 Don Newcombe. Now Greg stuck a Post-It to this one noting that Newk had 'issues' and might be a filler. No, Newk has taken his spot in the '57 set binder and there he will stay. One thing I don't remember mentioning since I was doing my '59 blog...'gifted' cards get an automatic 'grade' boost. Getting a card from a friend or fellow blogger, especially one for a set build or special collection, means a lot to me. They go in the binder with a little label over on the inside edge of the nine pocket sheet and the sender's name. I've missed a few here and there but for the most part, I can go through my sets and tell who sent me what. 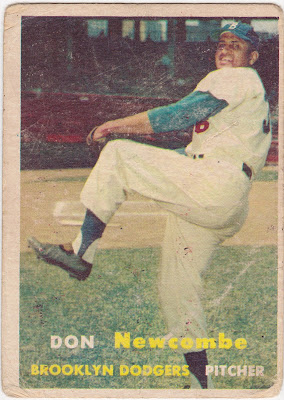 And then there is this... 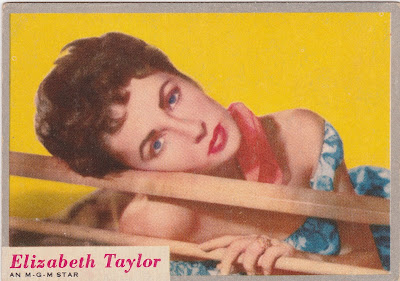 ...Elizabeth Taylor from the 1953 Topps Who-Z-At movie star set. Yikes. And to think that once upon a time I wondered what the big deal was with Liz Taylor. LOL, Yes, I'm a donkey.

I have about a half dozen of the 80 cards in this set. With some luck and legwork, I could put it together without a lot of expense. I previously posted a few of these. The beautiful duo of Greer Garson and Cyd Charisse are in this post. And Eve Arden is here in this one.

The rest of Night Owl's manila envelope contained Orioles of various types. Here is Tony Batista alongside a swatch of his uni. His career fell completely within my baseball 'black hole' period. 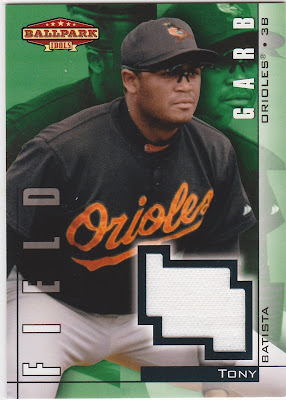 Brooksie from the Heritage set of 2019. Topps did capture that 70s' feel. 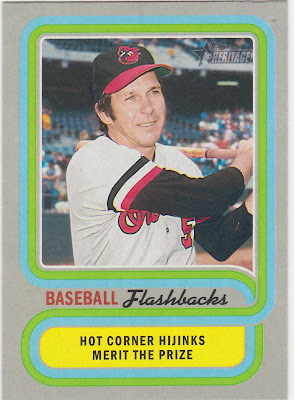 When I posted these on Twitter N.O. chimed in with a mention of Kyle Hudson being a product of Mattoon High in Illinois. I have to admit I missed the significance of that fact. Lil help? He's also a former Dodger farmhand, signed this card (sort of) and has his position listed twice on the front. 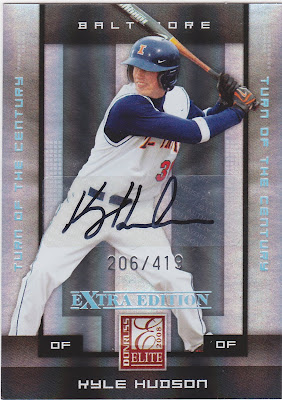 Now that I've finished my '75 set I've begun to organize the minis I gathered along the way. Ross Grimsley here is a buyback. The pic is from the days before he wore a huge perm. At this point, he still looked like half my high school friends. 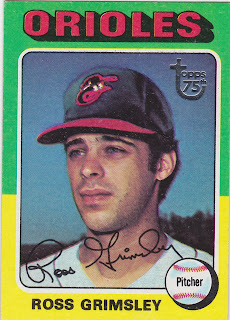 1969 Dave May. Yankee Stadium batting cage in the background. I've tried really hard to figure out who that is in the cage taking his hacks but I'm stumped. My first thought was Paul Blair based on the body language but when I blew the scan up it doesn't look like him. 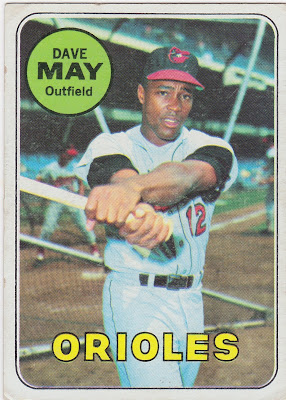 Jeff Conine, dressed as a Marlin, credited as an Oriole. Here is something I probably shouldn't admit: when I looked at Conine's BR page I saw the Fla-NYY World Series line and I thought "how did two AL teams play in the Series?" It was interesting to see that he went back and forth between the O's and Marlins a couple of times. 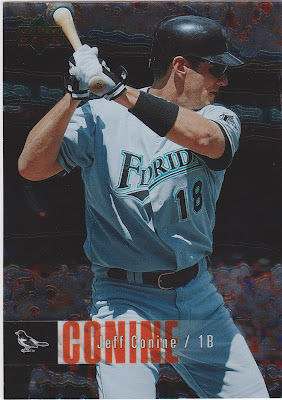 And what do we have here? 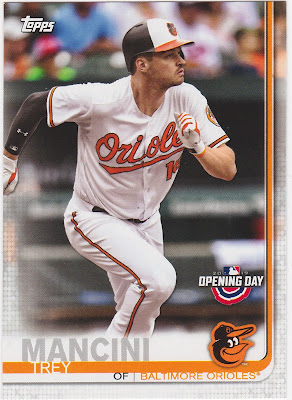 It's Trey Mancini...same card, different version. Greg included the Opening Day Topps Mancini. If you look closely at the cards side-by-side you can see the slightly different cropping. 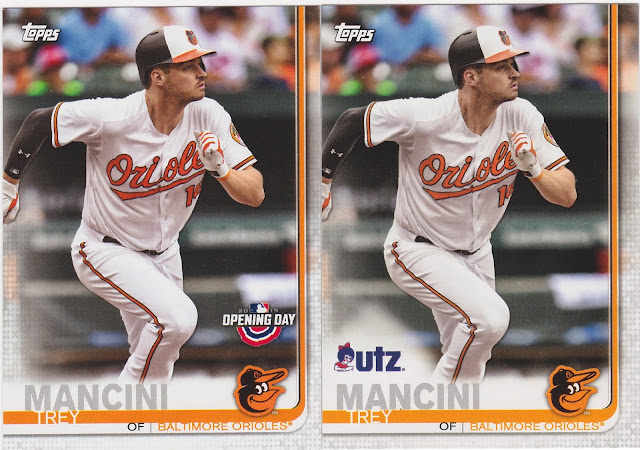 The OD version has somewhat richer (printing term?) colors. Other than the numbers the backs are the same. 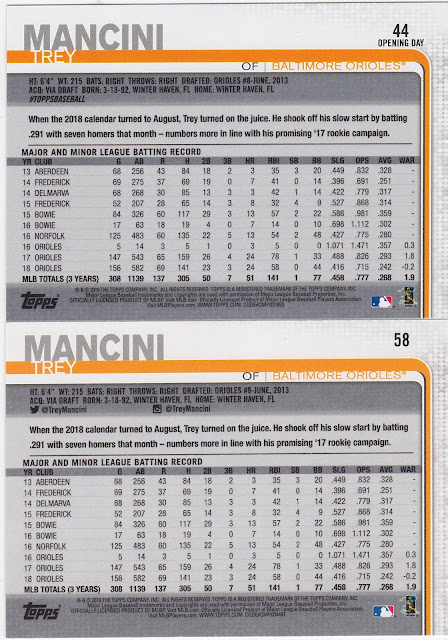 Thanks again to Mark and Greg for the surprise packages. Both were very much appreciated. One last thing... one of the reasons I was out-of-pocket for a few weeks was a trip to St. Louis to help my best friend celebrate a milestone birthday. There was baseball involved.

Here is what we found under the Gateway Arch on the day we arrived... 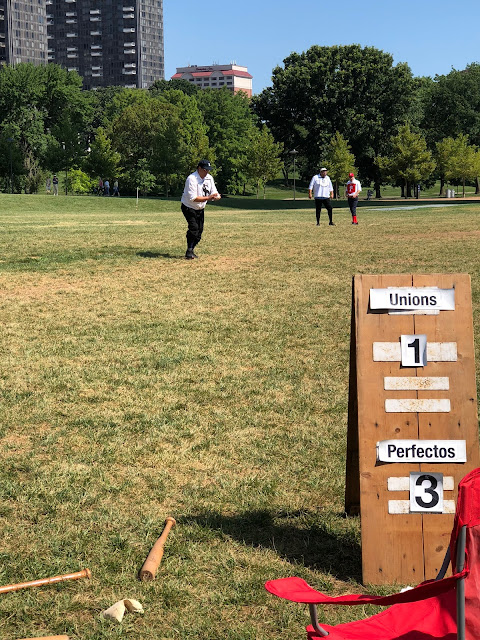 Vintage baseball is played there regularly. I failed to get a pic of the guy in the period suit and top hat who manned an info table and was happy to talk about it all. He gave us the rundown on the teams including the fact that the 1890s version of the Perfectos went on to become the Cardinals.

We also made it out to Busch Stadium and watched a Cardinals victory over the Pirates. I was impressed by the place. I'll post a few pics in some future posts.
Posted by Commishbob at 4:19 PM