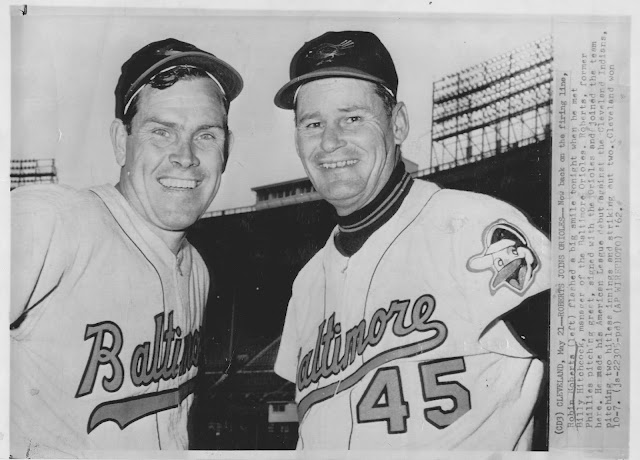 While looking for something else I came across a seller on eBay with a bunch of reasonably priced wire service photos and among them were some Orioles-related ones. I bought what I thought was the best of the bunch.

Since I'm such a sucker for the early '60s Orioles jerseys I had to pick this one of Robin Roberts and Manager Billy Hitchcock. The fact that it's a shot of Roberts is a nice bonus. Even I tend to forget that he did some good things while a member of the Orioles. He was a double-digit winner in each of the three full seasons he played there. I saw him pitch at least a couple of times. He beat the Twins in a game I attended in 1963 during our annual 'late in the summer' trip to Charm City. I also saw him in Yankee Stadium but I can't recall or figure out when exactly. All I remember is that it was a night game.

The photo's caption relates to Roberts' debut with the O's in May of 1962. He had signed with the Yankees after the '61 World Series but never made an appearance with them early in 1962 before he was cut and signed with the Orioles. 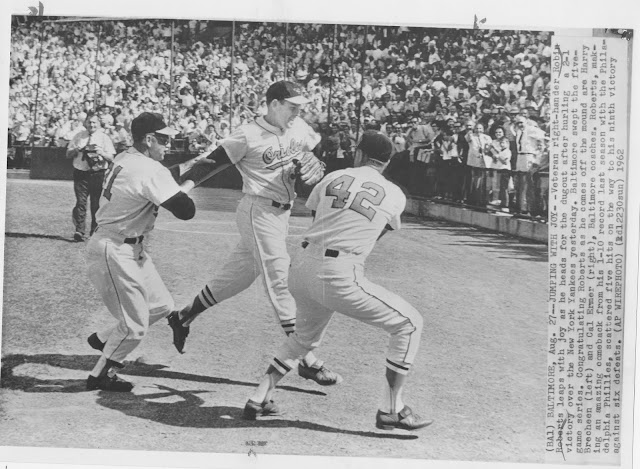 Roberts stars in this next photo as well. This picture comes from this game later in that same season.

The caption states that the Orioles swept a five-game series from the Yanks. That was five games in three days. Good times. Of course, the Yanks had the last laugh, they won the pennant and my Birds finished 7th. 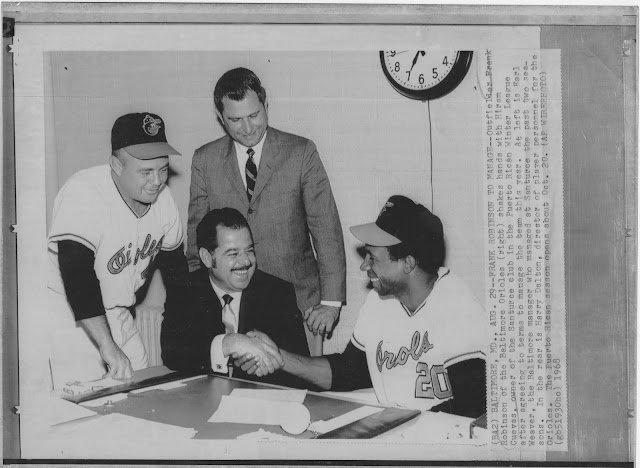 No action in this third and final photo. It shows Frank Robinson as he signed to manage in the Puerto Rican Winter League in 1968. The team was called the Cangrejeros (or Crabbers). It was a big deal at the time since the majors had still not had a black manager and Robby was a big star. This is really what set in motion his eventual hiring in Cleveland.

Frank's Hall of Fame bio recounts his days as a manager in Santurce. And has some cool pics as a bonus.

I picked up a handful of other photos in the purchase including a couple of Billy Pierce shots. I'll get those posted in the new year.
Posted by Commishbob at 11:39 PM