P-Town Tom (P-Town is Peoria, I was unaware) asked us to blog about what we considered our favourite card of 2018. Me picking a 2018 card is like a goat farmer trying to find a Kentucky Derby entrant in his barn. It doesn't take long to scan the possibilities and none of them are likely winners. But, oh well.

My problem is the fact that I haven't really bought much in the way of current cards in a long time. I snagged a pack of Heritage and a few of the other 'new cards in old designs' sets this year. I didn't get much of interest or anything cool. 90% of my 2018 cards came from other bloggers' generosity or in COMC purchases for my fantasy team collections. And with those, I usually get a cheap common.

There are a few exceptions and my entrant in the 'Favorite Card of 2018' contest is one of them. I'm choosing this 2018 Panini Elite Patrick Mahomes. I'm not sure whether it's the card or the player that inspired this but here we are. I have Mahomes in the one league I actually care about, and I sure thank the football gods for that. It's a dynasty league and I took Mahomes with my second round pick last year.

With injuries killing my runningbacks Mahomes has not only kept me afloat but he lifted me to a pretty good year, all by himself.

Anyway, it's a pretty sweet card. I bought it to replace the one I had in my binder that showed him in his college uni. Panini does a pretty nice job with football cards. (I think it's a shame that Topps has exclusive MLB rights). The red and gold of the card nicely coordinate with the spiffy Chiefs uniform. The 'action' is nothing to write home about but as I said, I have a small pool of contenders to choose from. 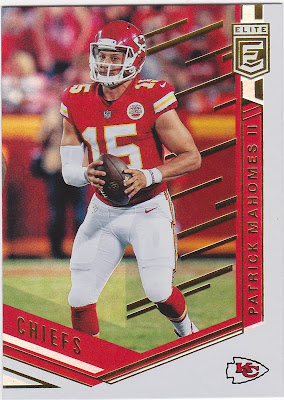 I actually considered a few others for the prestigious 'CommishBob's Best 2018 Card' award/contest entry. Here are the runners-up, in no particular order: 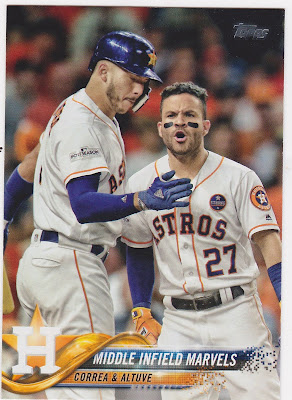 Topps base card of Altuve and Correra. It's easy to like both these guys even if you are not an Astros fan. I like that you can see the post-Hurricane Harvey 'Houston Strong' patch on Altuve's jersey.

This next one slid in from Night Owl a few weeks ago. I snatched a nice '71 Hoyt Wilhelm from his giveaway and he padded the card sleeve with a pink (PINK!!) chromafied Trey Mancini card. I had the regular chrome Mancini in my fantasy binder but this pink (PINK!!) one bumps that one to my regular Orioles collection. I like variety in my fantasy player binders and there isn't much more 'varied' than a pink chrome card. It certainly stands out on that page. 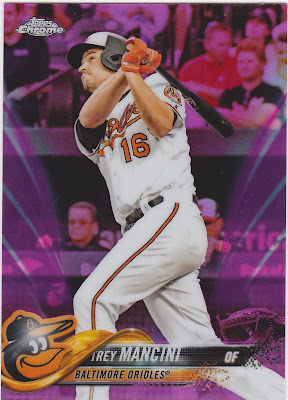 And then there is the card I was going to choose until I was going thru my football binder and spotted the Mahomes. It's this Paul Pogba World Cup Panini Prizm card. I followed the WC this year like never before and it was a ton of fun. There are other countries I would have prefered to see win (I'm looking at you, Portugal) but France was undoubtedly the best in the tournament and earned the title. 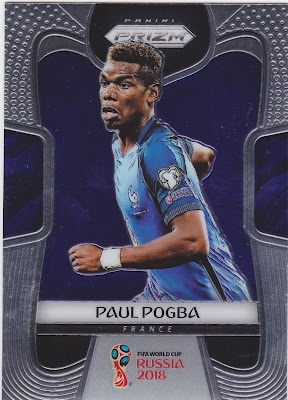 Pogba, of course, plays his professional footie for my seriously underperforming Manchester United club. I love the sport but the drama of players vs coaches, in-season transfer window madness and the general crapload of foolishness that swirls around soccer is pretty stupid. I try to ignore it but some of it is unavoidable. I enjoy watching Man U matches at the Houston bar where their supporters gather but hearing the cussing and griping gets old after awhile.

Oh, I almost forgot...that's a really sweet card, right? Again Panini shows what they can do when they don't have to concentrate on removing logos and airbrushing pants stripes.

OK, I've managed to post a card for the contest and get some stuff off my chest. I feel better.