A recent eBay discount code day gave me the chance to save some money on a card I've had on my watch list for quite a while. Pardon the lousy photo. My scanner tends to blur and washout cards in PSA holders and I'm never very successful at taking good pics with my phone. But here it is: 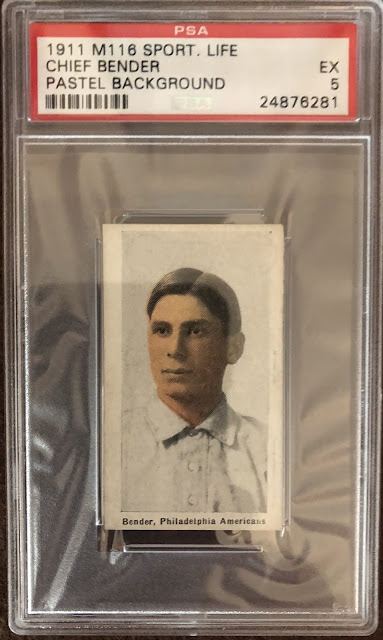 The card is a  much nicer copy than what I expected to be able to pick up. Really nice corners, no paper loss, etc. It looks so much better in hand than it does in these pics. I'm not sure but I think this is the only pre-war car I own with a grade of  '5'.

Sporting Life was a weekly publication based in Philadelphia which was in business from roughly the mid-1880s until the mid-1920s. It was a direct competitor of The Sporting News of which many of us are more familiar. The entire run of the Sporting Life is available online through the LA84 Foundation archives. This link is to the 1911 issues. I wish the site wasn't so clunky and difficult to navigate. But checking out some of the pages is fun. Wikipedia reports that the SL focus was on baseball and trap shooting. 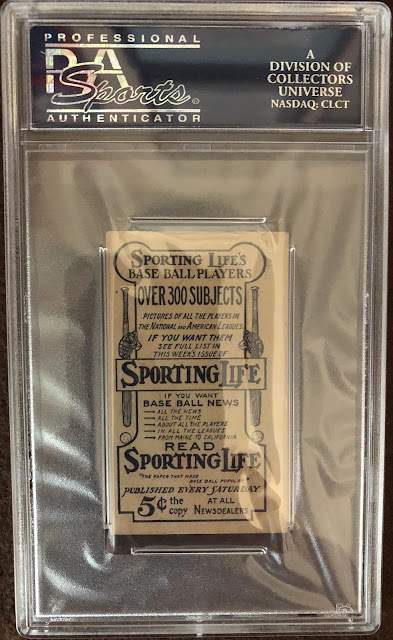 OldCardboard, as usual, is a great resource for some background on this really cool set.  Here is the checklist which has stretched to 400 cards. Chief Bender has three variations in the set. This is one of what is called the 'Pastel Background'. He has a second one with a different card back. He also has a 'Blue Background' version. I'm just happy to have one. I won't chase the other two because I'd rather spend my money on a different career-era Bender.


Back to the set itself...Oldcardboard describes the set with these characteristics:
You'll note that the site mentions that many of the M116 player poses are the same as found in the T206 tobacco set. Bender has three cards in that set as well. One is a portrait and while it is indeed similar, it doesn't appear to be the same pose. I suppose the possibility exists that the original photo was the same and the two artists put their own spin on it. But to me, there are enough differences that I suspect the two cards were based on two different photos from the same session. You can check them out below in another of my crappy cellphone pictures. 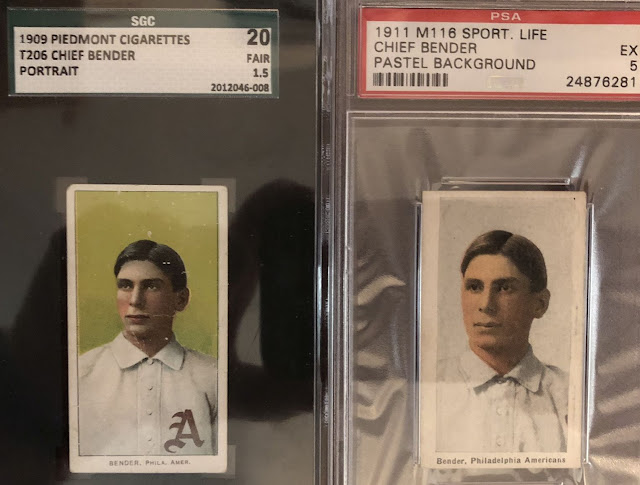 I also ran this one on my scanner and, as noted, the label looks fuzzy and the colors are not as pretty. But it is what it is. 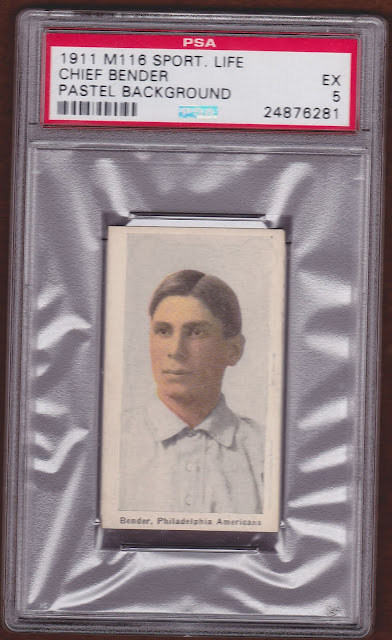 Posted by Commishbob at 5:15 PM