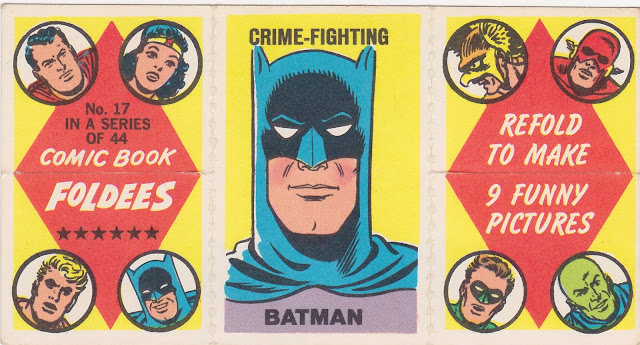 Here's an off-the-wall Batman item I added a few weeks ago on a whim. This is a 1966 (or 1967) Topps novelty issue known as Comic Book Foldees. Pretty simple concept...three separate characters on a foldable 'card' that can be mixed into a an additional six 'hybrid' characters. The two outer panels are 'split' to allow this effect. Pretty entertaining ...for about five minutes I guess. Then again in the mid-Sixties, kids were more easily entertained by things like this.

Topps licensed the DC characters for this and used other famous faces. Babe Ruth pops up in one. I was very pleased to find that my favorite President got to share this with my favorite crime fighter.  Does anyone reading this have any recollection of these things? I was in high school so I doubt they would have caught my eye at the local candy store or drug stores that were our main suppliers of cards and crap.

The wonderful Topps Archive blog brought this to my attention with a post in October and I quickly found that my man, Batman, was on the checklist. There are several other Batman-related characters and the Batmobile is also included but I'm good with just the Dark Knight for now. The TA blog goes into detail on this goofy Topps set with the usual painstaking research he shows every Saturday. He explains why the set is actually a '67 item despite the 1966 date that is visible.

If you are so inclined you can view the entire 44 piece collection online. Apparently, a second, larger (in physical size) version was also released. 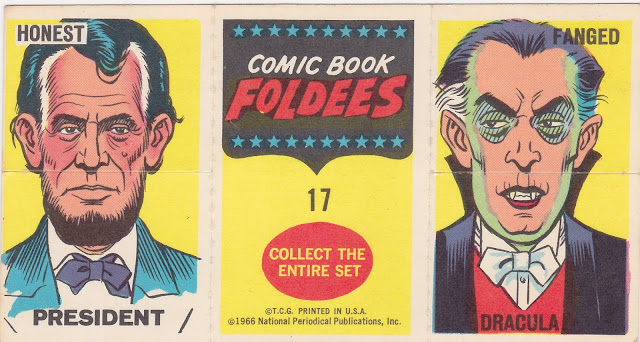 I don't like putting stuff like this on my scanner but I sucked it up and made one 'fold' so you can see the hilarious Crime-Fighting  President. 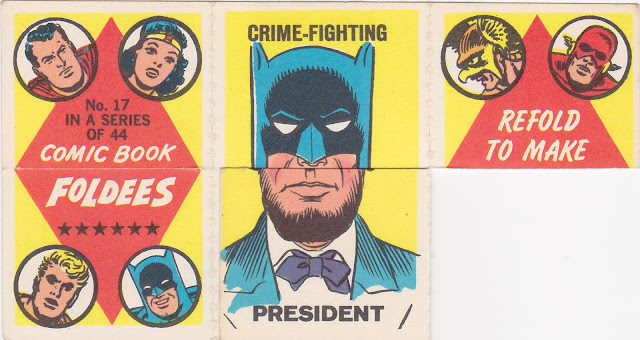 And just for comparison's sake here is the Foldee alongside a standard Topps card: 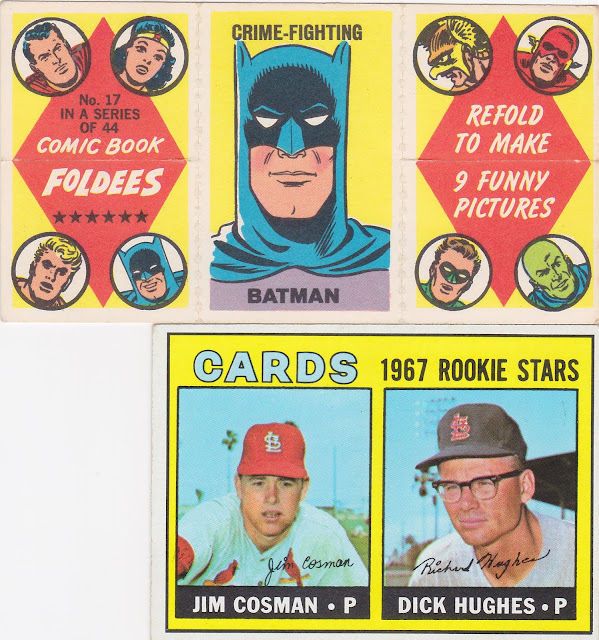 As I said I won't go out and find any others in this set but if I did I might be tempted to track down the Jimmy Olsen/Grubby Beatnik/Graceful Dancer!
Posted by Commishbob at 10:05 PM