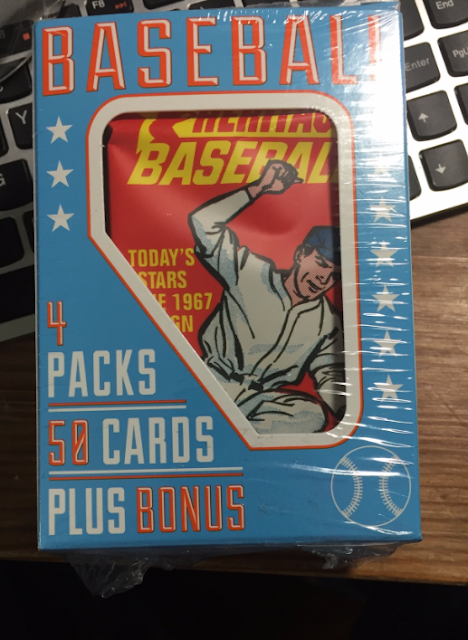 So on the way home from my most recent card show visit (that's a different post) I stopped at a Target I usually never bother with. But I was in dire need of an iced coffee and that was the nearest Starbucks location.

Of course I hit the card aisle and ended up grabbing this box on a whim. I didn't quite know what they meant by the 4 packs/50 cards/bonus business but I soon found out. Here's what was inside: 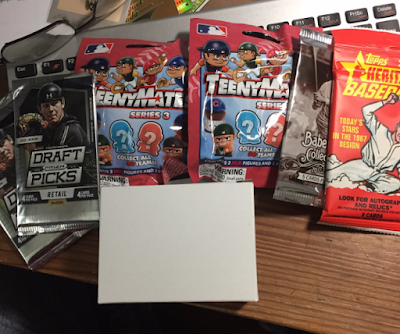 The packs were pretty mundane. The two Draft Picks packs were a waste. Logo-less cards of guys I've never heard of. The cards suck. And there were only four to a pack...which made me think of the Woody Allen bit in Annie Hall where he retells the old joke about the food at a Catskills resort.


I already have the Babe Ruth set so that pack is dupes. The Heritage pack wasn't bad. I pulled a Manny Machado and a card I could use in my fantasy binder, Andrew Cashner.

The white box held the 50 cards. It was a John Smoltz hot box as I got three(!) cards of his and a load of other trade fodder. The Smoltz trio was interesting because I was listening to him educate Joe Buck on big league pitching as I was flipping thru the cards. Everything else was the same sort of thing that shows up in every Fairfield repack...junk wax era Donruss..2012 to 2015 Topps and a scattering of 1990s cards featuring lots of gold foil over fake granite borders...i.e. 1994 Pinnacle Select.

The 'bonus' was two packs of TeenyMates. I will admit that I've never seen these things before. Each pack contained two 'mates' representing MLB teams, a couple of puzzle pieces and a foldout which serves as ad piece, checklist and info sheet.

I was puzzled by them being all catchers but I went to the webpage and figured out that there are several series of these things and each series featured a position or baseball pose. They also listed some special 'TeenyMates' and gave the a category of  'common', 'rare', and 'ultra rare'. The rare ones are 'gold', glow-in-the-dark or uniform variations. They have them for all the major sports. Who knew?

From the front I had a hard time seeing which teams were represented among my four new little friends. My crappy phone pics don't help here so I'll tell you that I got a Padre, Pirate, Cub and Brewer.

Here are the two sides of the enclosed flyer. I gotta say that I liked these more than a soon-to-be 65 year old probably should. I'll end up giving these to my wife to use as rewards for the kids she tests but first I'll let them sit on my desktop and watch a bit of postseason ball with me. 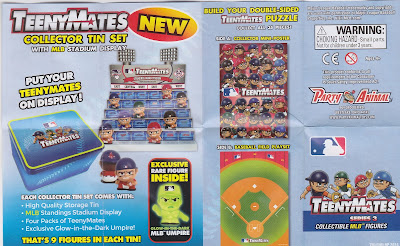 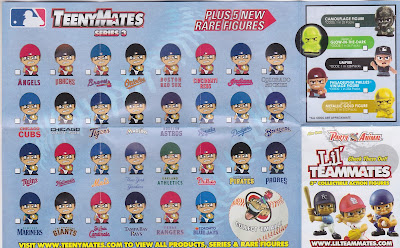