The weird and wonderful TCMA Stars of the 50s and 60s sets ended with the 1981 issue of a Series II for the 60's set. It picked up the numbering at #294 with nine minor league players (including a Sparky Anderson card) and ran through #482.

The 'Big Leaguers' begin with this Maris/Mantle beauty at #303. 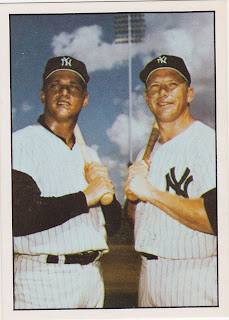 There is no card numbered #319 but there were two #399s so the speculation is that one of those was mis-numbered. Makes sense. Here are the two cards involved: 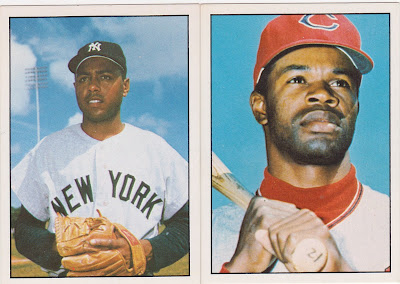 The numbers on the backs are tough to read. Be forewarned of that if you have to sort these. LOL My 64 year old eyes were not happy! 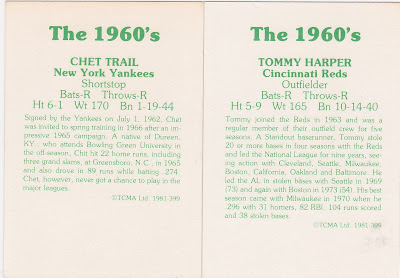 Here is a better look.

The 'set' I bought was minus the minor league cards. The eBay listing only mentioned that there were nine cards missing without further explanation. When it arrived and I saw what I needed I was afraid that the minor leaguers would be some sort of scarce short prints that would cost me dearly. Turns out only the Sparky Anderson card carried a premium. The rest were available for under a buck for the most part. A quick trip to COMC and SportsLots garnered me the nine I was lacking and that was that.

The first of the minor leaguers that arrived at my door (the only ones so far) are these two guys from the Buffalo Bison, a Mets farm club in the 60s. Scanning them I noticed that the backs are printed upside down. Just another bit of quirkiness.

This is infielder Cliff Cook. He played in parts of five seasons for the Reds and Mets. 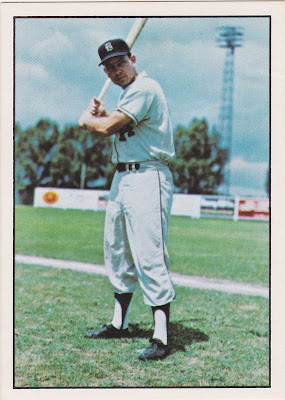 Craig Anderson was an original Met who was picked up from the Cardinals in the expansion draft. He pitched in 50 games in 1962 for New York. He worked mainly out of the bullpen but did make 14 starts. Here's a weird fact. Out of the bullpen Anderson won both ends of a doubleheader against the Braves on May 12. He had won another game as a reliever six days earlier over the Phils. Those three wins in the span of less than a week were his only wins of the season. He lost 17 others as well as recording 6 blown saves. 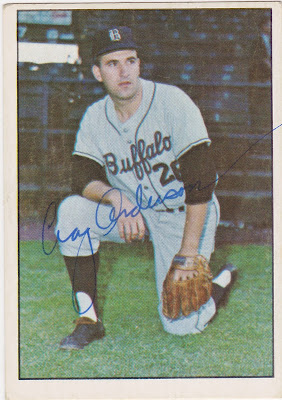 The rest of the set is chocked full of the same type of goodies that the previous TCMA sets contained. There are however more action and multi-player cards then were seen in Series I of the 60s set.

The multi-players cards come with one caveat, two actually. All except one feature photos of either the Yankees or Mets.

Fairly easy to name the players without looking at the back. Here is the outfield that the 1969 Series made famous... Jones, Agee and Swoboda. Bleep 'em all. 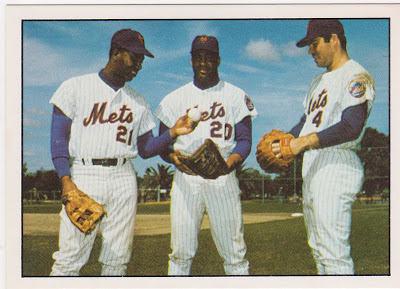 This next one is id'd as being from spring training of 1962. It features the Bombers from the 1961 team: Maris, Berra, Mantle, Howard, Skowron and Blanchard. 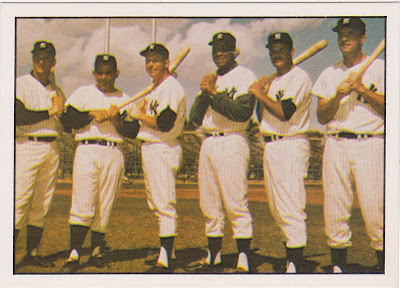 And they were not all 'players'. We get the photos of the two NY clubs that include the staffs. This Met's pic is actually a Dodgers reunion shot with Casey, Gil Hodges, Charlie Neal, etc. All of whom were one time Brooklyn Bums. 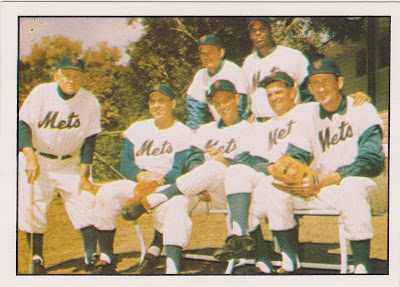 The Yankees coaching staff smiled for the camera. Well some of them did. 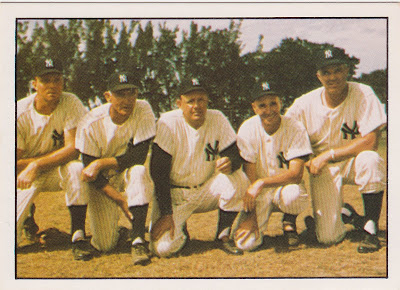 And the guys on these cards were not all star players either. Look kids, it's Ron Taylor and Don Shaw! 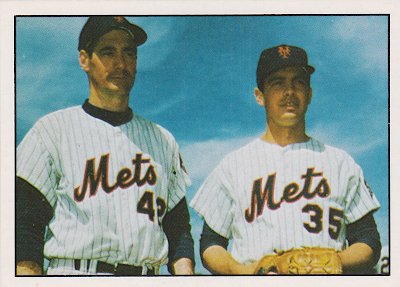 The oddball of the group is this one of the Cardinals brain trust. 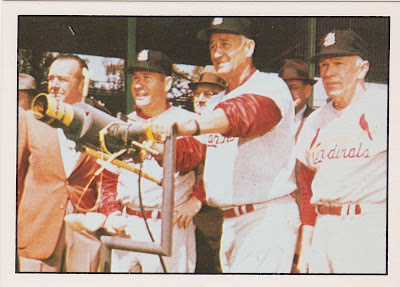 I'm a bit disappointed that the back makes no mention of what appears to be a t-shirt cannon prototype but is undoubtedly a ball launcher. 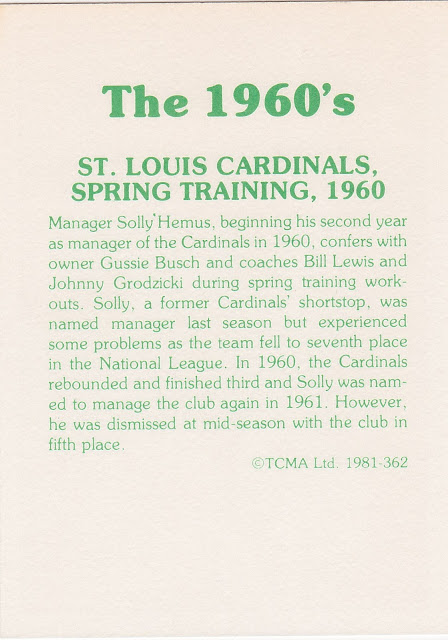 Also sneaking into the mix are some actual game action cards. 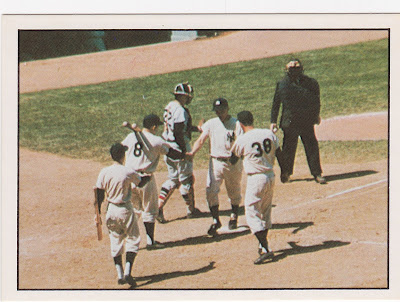 This one of Roger Maris greeted at home plate has game details on the reverse. Here is an expanded view for easier reading. Does this remind anyone of a current phenomenon? Let's label this one as a TCMA Now card.  And note the pencil check marks. Some of the cards with more than one person shown have these marks. My guess is that someone tried to guess who was pictured and was checking their work. 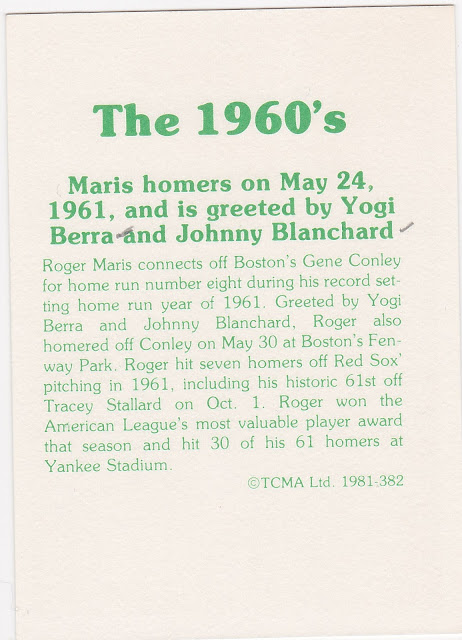 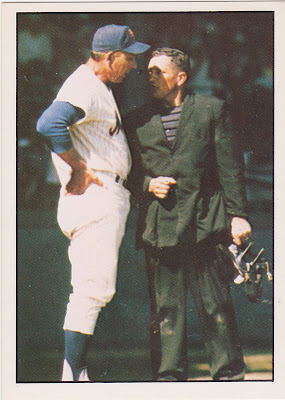 ...with the action annotated... 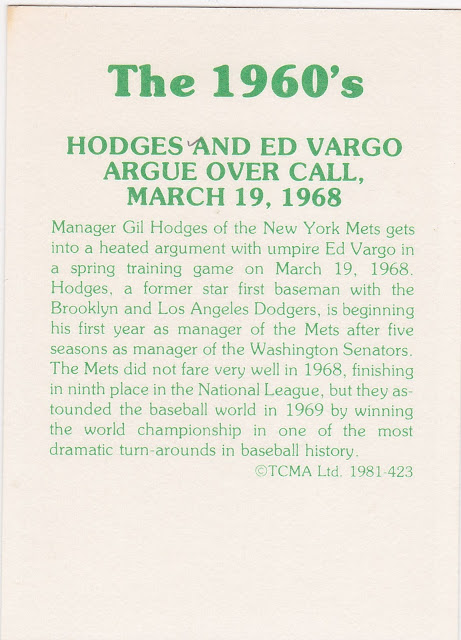 Most of the 'in action' cards were simply regular cards without the gory details. The Hammer got an action photo as a regular card in the set.... 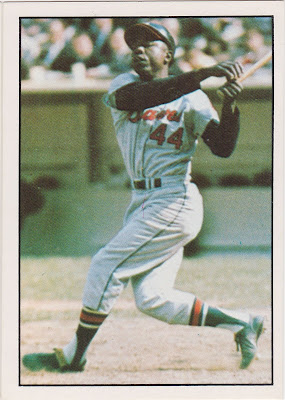 As did Steve Whitaker.... 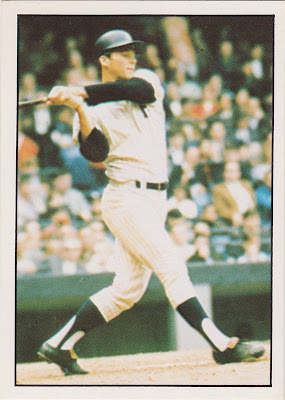 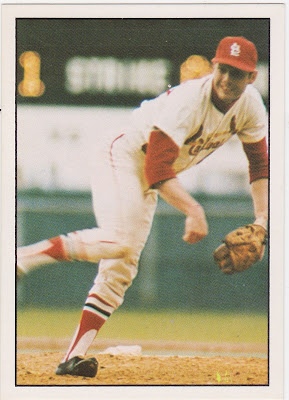 Ditto for Cardinal Ray Washburn. He once told my then 9 and 11 year old younger brothers to "Go to hell!" as he jogged on the warning track pregame in the Astrodome. All they had done was call his name asking for an autograph. If I hadn't been there to witness it I wouldn't have believed it. He was an ass but he knew how to wear a uni. Nice stirrups.

And there are others which seem to be cards taken during spring practice or game warm-ups as well as a few that are hard to classify... 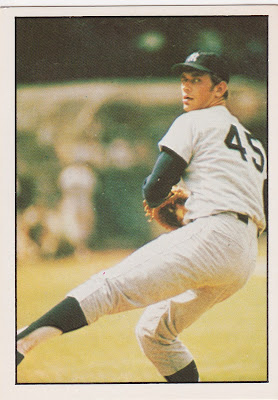 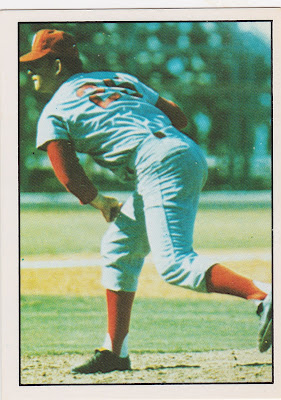 Senator pitcher Barry Moore. He was one of those 'his card was in every damn pack!' guys in the late 60s. 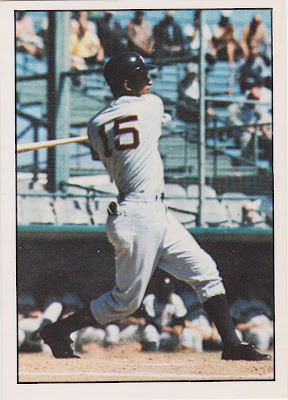 The Astros' Hector Torres got a spring training photo on his card. Torres couldn't hit a lick (career .216 average) but he used his fielding skills to carve out a nine year career in the majors. He's a baseball lifer and his current job is the hitting(!) coach of the Bowling Green Hot Rods. They are the Class 'A' Tampa farm club. 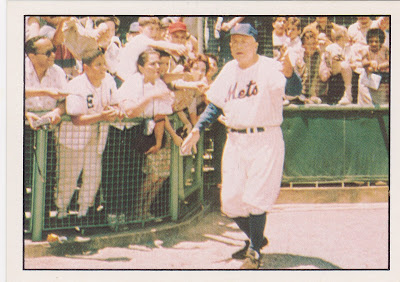 Casey Stengel got his own card. There are quite a few managers and coaches in this series. Below is Danny Murtaugh enjoying spring training life. 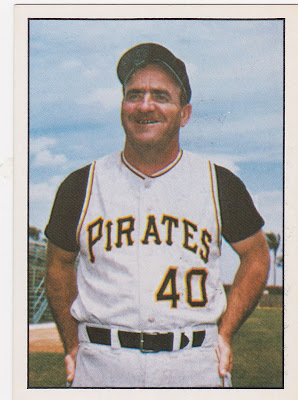 and Ed Lopat in the gold and green. 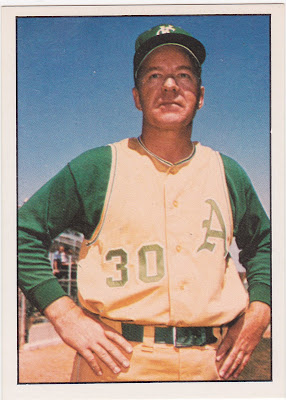 I have a lot more interesting cards scanned but I'll save those for the next installment. I'll end this one with one of my favorites in the set.

This shot of Ted Savage would look perfectly at home on a 1957 Topps card wouldn't it? Great posed photo in front of an empty Polo Grounds third base grandstand. 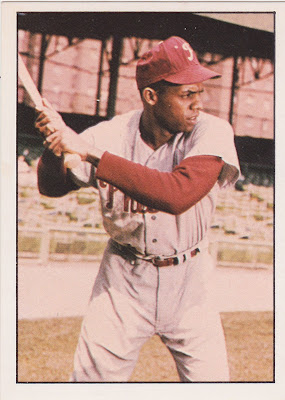 Posted by Commishbob at 2:51 PM