A Baltimore Colts White Whale! (or at least the tail) 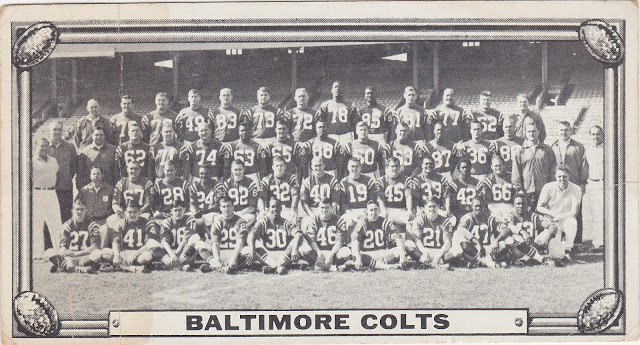 I've had this on my want list for quite a long time. It's a 1968 Topps Test Issue team card of the Baltimore Colts. They were never distributed nationally and are relatively scarce. With a crease and a stain dinging it's value I was able to grab this with a lowball offer on eBay.

The wonderful Fleer Sticker Project blog posted a lot of info on these in 2010 and you can see that here. In a nutshell these things came in a pack that featured a cloth patch. I dig the team card alot more than the patch but I was never asked to take the test so what do I know? The FSP post I linked has a shot of each of the available cards and stickers.

The back listed the players in the team pic. Topps issued one for 25 of the then 26 teams. The Cincinnati Bengals were a startup franchise and had no team pic to use. 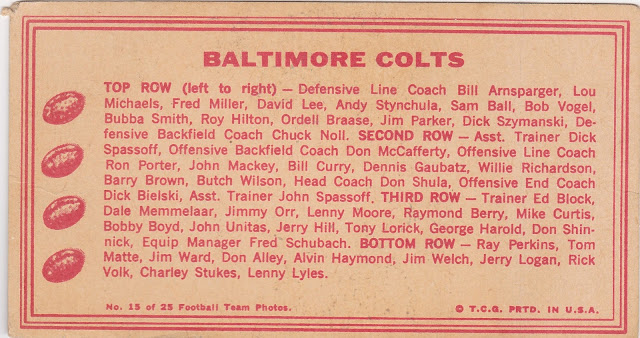 I know that the scans run over the border of the box but using a smaller photo setting kind of makes the card look like a mini. The actual size is 2 1/2" x 4 11/16" which is about equal to a 'tall boy' card turned on it's side.

I'm still actively searching for the Colts patch. I'm optimistic because it seems like my luck in uncovering long sought items is improving. The same week I found this card I also discovered a guy selling another item I've had on my Colts list. That is arriving this week and will appear in another post.
Posted by Commishbob at 12:28 PM