TCMA Stars of the 60s 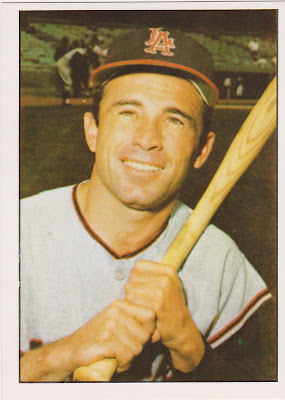 After picking up the TCMA Stars of the 50s set I let the other shoe drop and found their Stars of the 60s follow-up. At least I found Series I. Turns out TCMA issued a Series II a few years later, in 1981. I didn't know that until last night when I was digging for info on this thing.

There obviously isn't as much research on this as there is about mainstream Topps sets. There were 291 cards in this Series I. They are numbered to 293 but a couple of numbers were not issued. Even the number of un-issued cards is a matter of where you check. But I'm not worried about that. For now let's just look at a cross section of the cards.

That, of course, is Albie Pearson up top. I ought to start a PC of the guy since I've got so many of his cards. As I've mentioned before his 1960 card was the first I can recall pulling from packs as a kid. 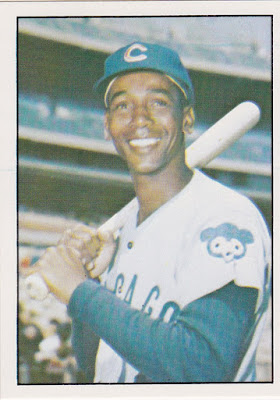 This Ernie Banks is a nicer photo than the one he got in the 50s Stars version of this thing. I'm guessing Shea Stadium but it may not be. I need Joe Shlabotnik to weigh in here.

On the whole the pix in this set are better than those in the Stars of the 50s version. Brighter, sharper, more focused images for sure. Cameras improved over time so that probably is to be expected. But more than that it looked to me that TCMA made a concerted effort to improve the printing and/or processing of the photos. 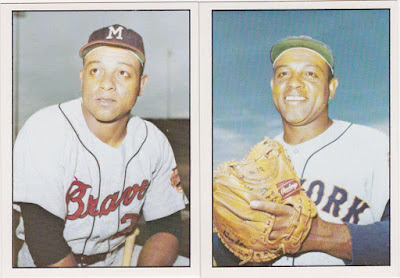 Jesse Gonder is one of several player who have two cards. He's here as a Brave and as a Met. Let's give TCMA credit for not using the same blurb on the back of both cards. 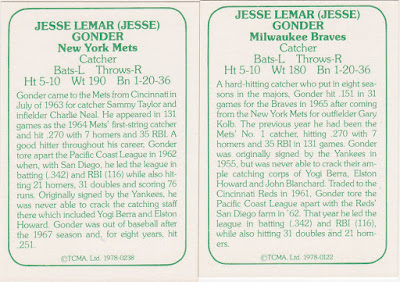 And speaking of backs.... 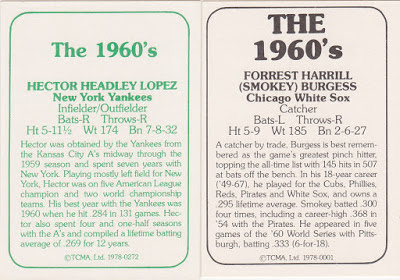 Here are the backs of a couple of cards and you'll notice the obvious differences. In the set I picked up all of the first 45 or so cards have backs printed with black ink with the set name in large all caps. The rest use green and some don't have the set label at all. I've also seen some of the low numbers printed in green. It makes me wonder if the black ink ones I received were a part of the TCMA 'team' sets of the era.

But either way the bottom line is that there are two back colors and three 'styles'. 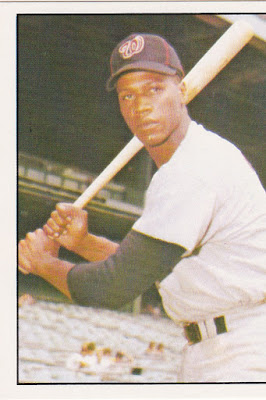 I have a soft spot for Chuck Hinton. Back when I was heavily into Strat-O-Matic table baseball he always seemed to outperform his Strat card. Since the Nats and Indians were always a part of my league I saw a lot of him. He has two cards in the set and I scanned his Cleveland card for inclusion later. 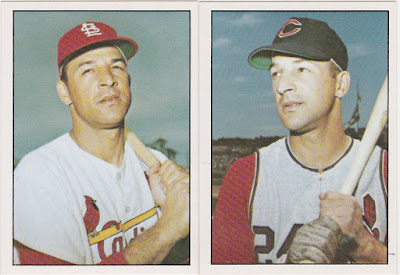 Tito Francona is another duel card guy. His two show similar poses. And yes, every card in this set, like the previous one, has all posed photos. 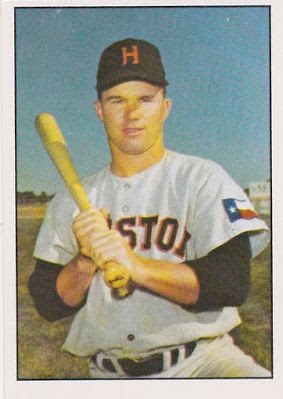 Ron Brand is wearing the seldom seen Astros spring training cap they used the year they changed from being the Colts to the Astros and moved into the Dome. I've seen pics of them wearing this thing as they worked out in the Dome in the days leading up to the first Astros Opening Day. 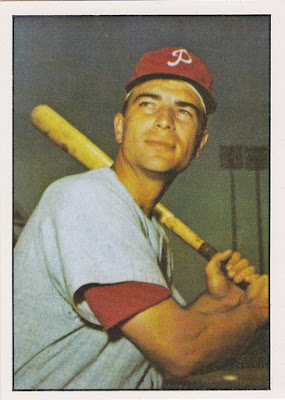 Johnny Callison is a favorite of mine. Stems from my time as a Phils fan, circa 1963/64. "My" NL team changed pretty regularly. 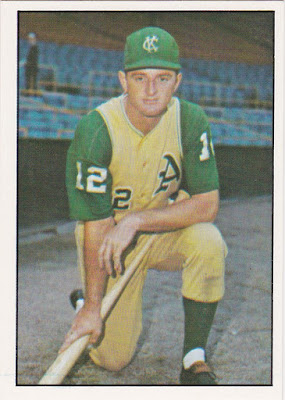 Above and below are cards that show off the wonderful green/yellow A's unis of the era. I don't think I was a fan back than but these have really grown on me over time. I hadn't reall thought about it previously but are the A's the only team to wear numbers on both sleeves? The Tigers and White Sox usually wore numbers on their right sleeve. Anyway the Athletics have front and back numbers and both sleeves covered. Is that a baseball record?

That's The Hawk of course above and Bobby Del Greco below. 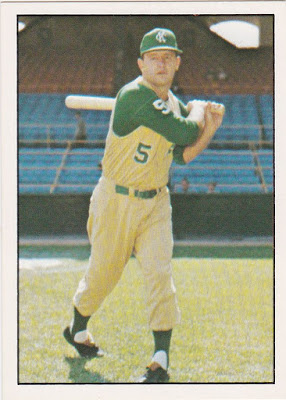 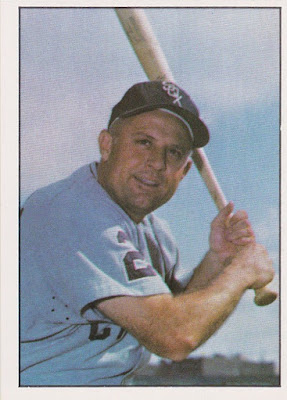 Smoky Burgess showing sleeve and front of jersey numbers. Add the one on the back and you get three. Be honest...you didn't know his first name was "Forrest" did you? 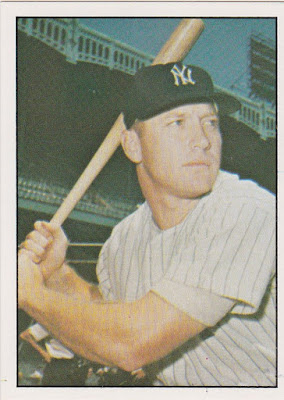 The Mick, Yankee Stadium. All business. 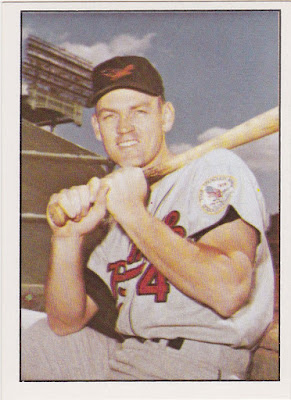 Norm Siebern of the Orioles. I remember my uncle in Baltimore telling me that this Boog Powell kid was going to push Siebern off the O's. He was right. 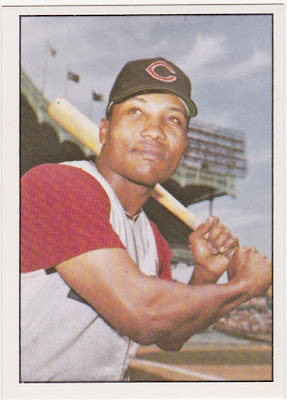 Leon 'Daddy Wags' Wagner. Too cool for words. And he f'ing knew it. 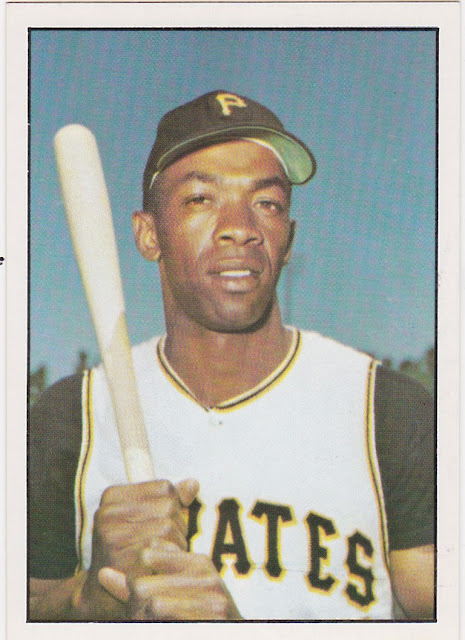 Donn Clendenon is wearing what we always referred to as a 'patch hat'. We were always baffled by the fact that the Pirates had the same crappy type of cheap looking caps that we got on cap day at Yankee and Shea Stadiums. 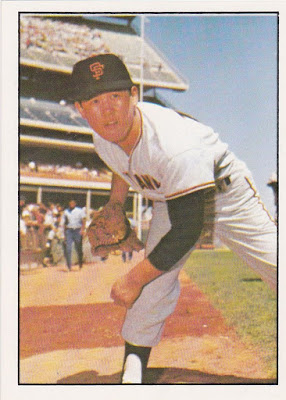 On September 1, 1964, pitcher Masanori Murakami became the first Japanese player to play in the major leagues. I remember what a huge deal that was. My best friend and his dad were big Giants guys so we talked about them a lot. 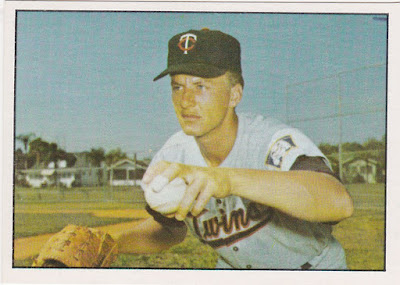 Gerry Arrigo on one of the very few horizontal cards in Series I of this set. I looked thru online photos of Series II and there are many more of these as well as some of the group shots that we saw in the Stars of the 50s set. 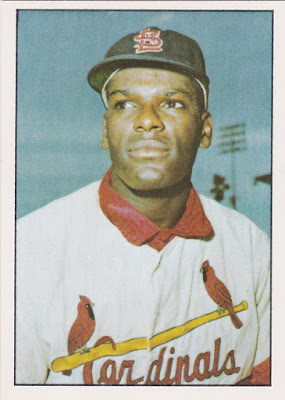 And finally here is the great Bob Gibson. I'm usually a sucker for nostalgic touches like the dark Cards cap he's wearing. Not in this case. The Cards look much better wearing red ones.

I'm going to save the rest of my scans for a second post of these. By the way..if you are interested in picking up this or the earlier set I'd advise not jumping on the first listing you see. The prices on these things are as varied as anything I've come across. I see them with an asking price of over $100. And I see them for as little as $25. I paid under $30 shipped. Do your homework.

Posted by Commishbob at 8:28 PM