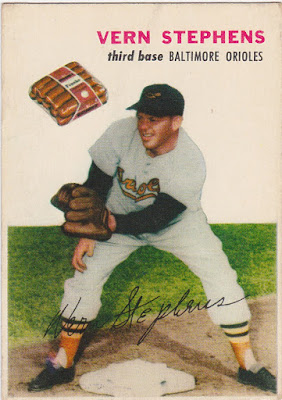 I've had this card on my 'someday' list for a long time. Wasn't on top of the list but it certainly was there. Problem was...the price. These Wilson Franks cards routinely go for over $200 even ungraded. I had an eBay search going for this card and I would get a couple of 'hits' a week but they always seemed to be for $300+ copies. So nailing this one for $85 was a pretty good deal. 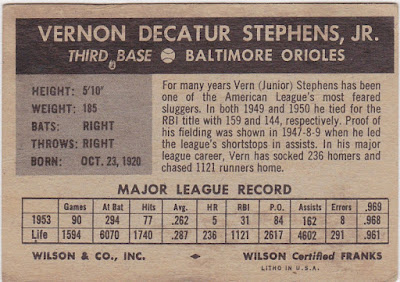 Stephens played in the majors from 1941 through 1955 with the Browns/Orioles, Red Sox and White Sox. He was a shortstop early in his big league tenure. The Browns experimented with him in the outfield after an arm injury but that was short-lived. That same injury, by the way, caused him to fail his Army physical keeping him out of WWII. In 1951 he moved over to third base and stayed there the remainder of his career.

No matter where he played he was a solid hitter. He led the AL in RBIs three times including back-to-back in 1949/50 with the Red Sox. Those years he racked up 159 and 144. His 137 total in 1948 was nothing to sneeze at either. He led the league with 24 dingers in 1945 and hit 39 in '49. He was a seven time All Star and he finished in the Top Ten in MVP balloting six times. With that resume I wonder why we don't hear more about Vern Stephens?

This little (20 card) Wilson Franks set is a lot of fun. It would be pretty pricey to complete but having a card or two would make a nice addition to a vintage collection. Both PSA and Sports Collectors Digest have some good background articles. Check 'em out.

Here is the (unnumbered) checklist: