More TCMA Stars of the 60s

One of the best things about the TCMA sets is that co-founder Mike Aronstein was able to tap into a big stash of pictures taken by free lance photographers. So many of the cards have unique photos. If you are tired of Topps' overuse of the same couple of Jackie Robinson pics you understand the attraction of these cards. 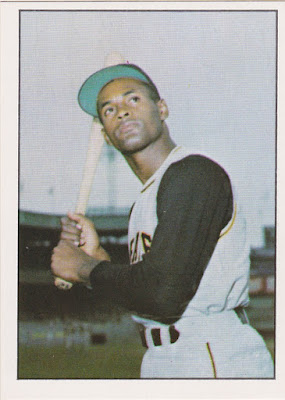 For example here we have Roberto Clemente. Have you ever seen this picture? Neither have I, until I found this set. I believe it was taken at the Polo Grounds but I'd listen to arguments. 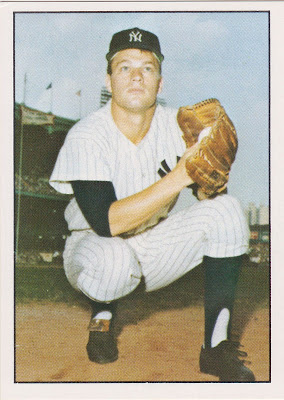 Jim Bouton at Yankee Stadium. As a kid going to games there I was always interested in the flags that flew above the roof. They were displayed in the order of the current standings. Like stirrups they are a detail of the game that I miss. 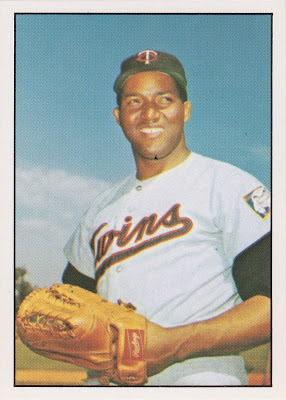 Whenever a set has a card of Vic Power I'll scan and post it because I just like typing the name Vic Power. 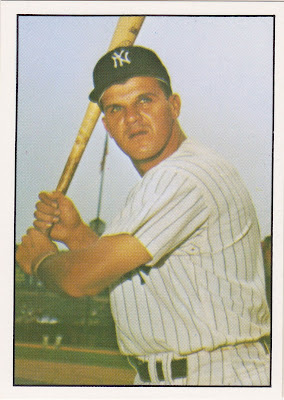 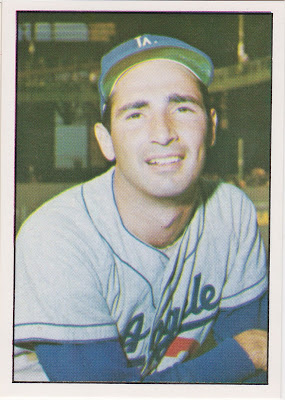 Sandy Koufax at the Polo Grounds. Again, a different pic than we usually see on cards. 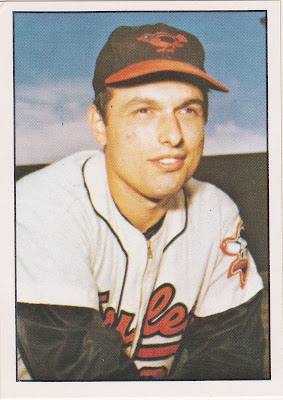 Milt Pappas wearing my favorite Orioles jersey. In fact that whole early 60s uniform set for the Birds was sweet. 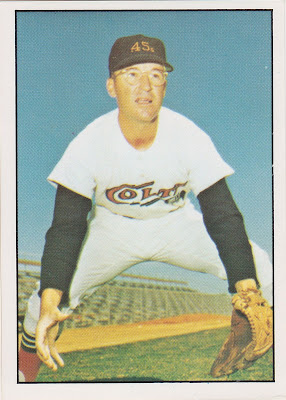 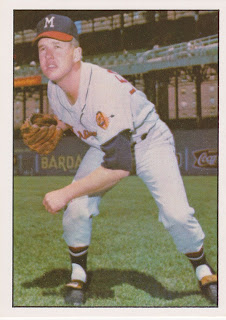 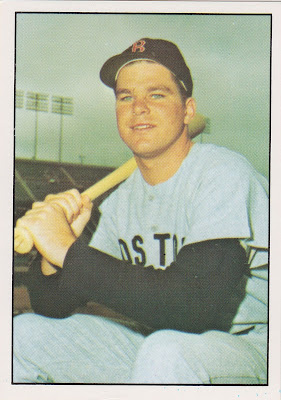 Tony Horton just looks too young to be a major leaguer in this shot. At first glance I was certain that Horton was posing in Memorial Stadium in Baltimore. The seating area certainly resembles the upper stands at the old place but the light standards are wrong. But in any case Horton is one of the most fascinating characters in the game's history. And he wasn't seen on a ton of cards. 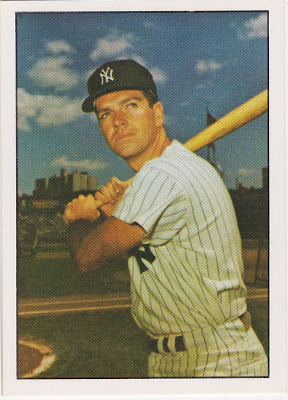 I love this card of Bobby Richardson. He was one of my father's favorites and despite the fact that he played for the Yankees I always gave him a lot of respect. From all accounts he's a prince of a guy still. 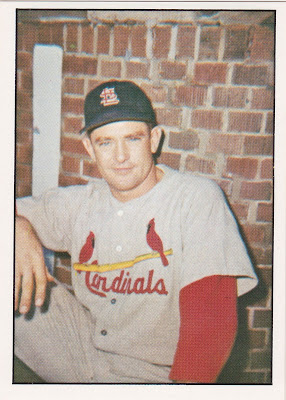 Here is what may be the most TCMA-ish card in the set. Larry Jackson lounges against a brick wall. 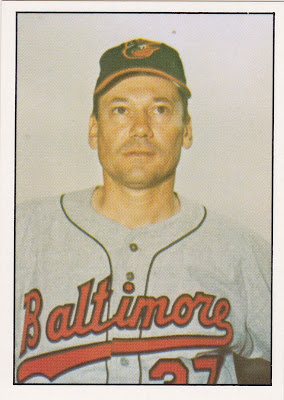 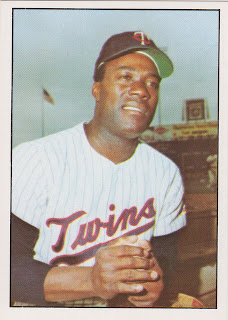 Mudcat Grant. Do yourself a favor. Watch this video of him singing at the memorial service for Harmon Killebrew in 2011. He's accompanied on guitar by Tony Oliva's son. 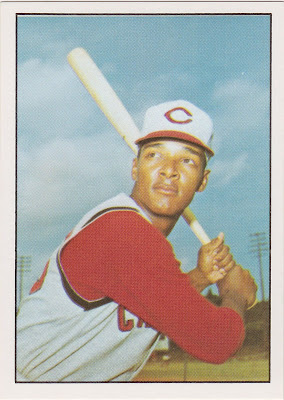 One of the more under appreciated players I saw as a kid was Vada Pinson. I casually collect his cards. I'm glad to have this one. 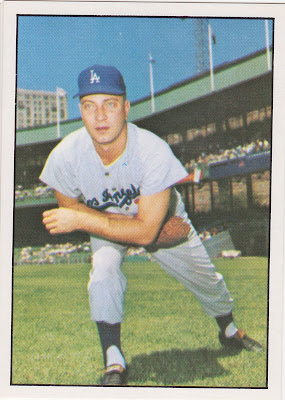 Johnny Podres at the Polo Grounds. Just a nice card. 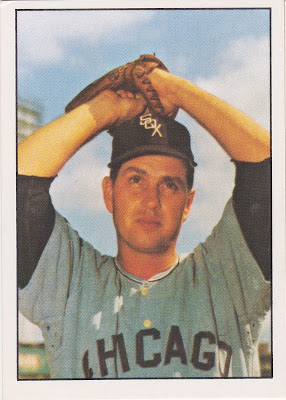 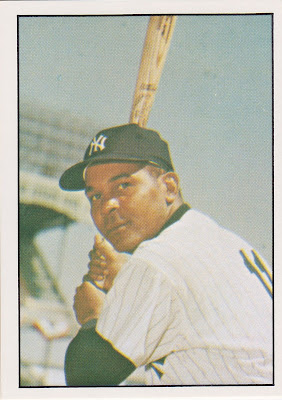 'Hector's Pup' is what my father called Hector Lopez. I guess it came from the expression that went along the lines of "I haven't _____ since Hector was a pup!" meaning a long time ago. Why my father called him that I don't know. I never asked. 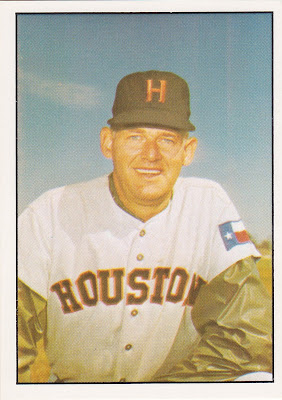 Don Larsen in another 1965 Astros spring training photo. We know it's '65 since that was the only year he spent the spring with Houston. He was 35 years old but seemed older than that. 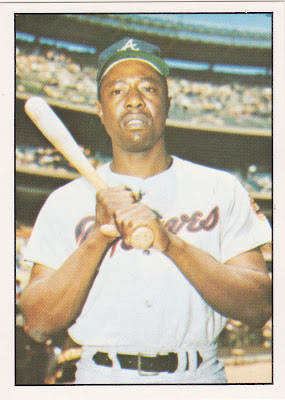 Hank Aaron at Shea Stadium. The Braves, like the Orioles, didn't have their city on their road unis for quite some time. 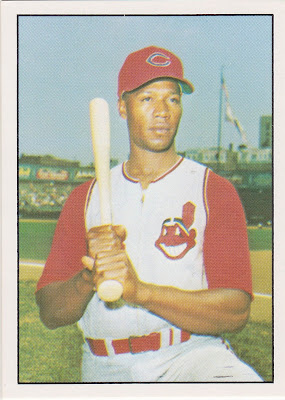 And finally Chuck Hinton, my old Start-O-Matic hero, in his Cleveland garb at Yankee Stadium. He played six seasons for the Indians but stuck a season (1968) with the Angels right in the middle of them.

I had forgotten until I looked him up on Baseball Reference that he was originally signed by the Orioles who lost him to the Washington Senators in the 1960 expansion draft. He made the 1964 AL All Star team as a Senator and got to play a couple of innings in left field at Shea in relief of Harmon Killebrew.

Last night I won an auction for a nearly complete Series II piece of this set. It lacks nine cards which will give me something to chase. When I looked at the checklist I discovered that Series II contains the multi-player cards that were lacking in this 291 card Series I. It arrives next week. At that point I'm calling a hobby 'timeout' and will organize and page/binder the entire TCMA run of sets I've picked up.

Gonna be a good time.
Posted by Commishbob at 11:07 PM