Continuing with my vintage pickups from last Saturday. Some of these are also from the 3 for $1 bin but others were in my friend's boxes at up to a dollar each. 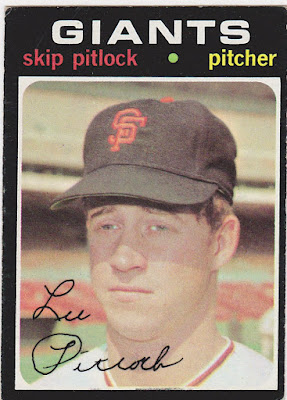 Lee 'Skip' Pitlock looks like he was just told to eat a spider by Willie McCovey. And I know third graders who have better signatures than that. Pitlock pitched for the White Sox a few years after his stint with the Giants and had a career mark of 8-8 in 59 games. He got into real estate and then the mortgage industry after retirement. Here is a short, promotional bio-type video of him with something neat in his pocket.

I think I paid a buck apiece for these two flawed Post Cereal cards. But I couldn't pass up Rocky Colavito even with that mangled airbrush job on his cap.. '61 wasn't a bad year for him: 45/140/.290 with 30 doubles. 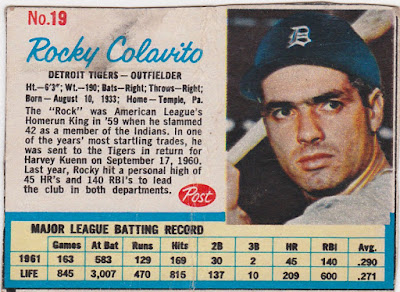 I already owned this Brooks Robinson Post from the same year but i can always stick this one into my oddball/food issue Orioles binder. 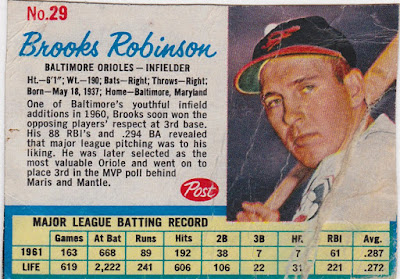 Johnny Callison was a favorite of mine when he played for the Phillies. I collect his cards and according to my spreadsheet on Dropbox I needed both of these. But I suspect I had them already, at least the '65. I'm seriously behind on updating my PC spreadsheets. 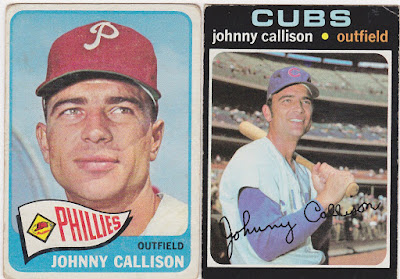 Norm Siebern played for the Orioles just before they became an AL powerhouse in 1966. He played in two World Series with the Yankees before having some good years with the A's. I knew all that.

What I had completely forgotten was that he also played for the '67 'Impossible Dream' Red Sox. He got into Game One against the Cardinals and came up to pinch hit in the bottom of the 7th with two outs and Reggie Smith on first. Smith was immediately caught stealing so Siebern played 1st base and got to bat in the 8th. He singled. If Smith had stolen that base and Siebern then gotten that single who knows how the Series might have turned out. 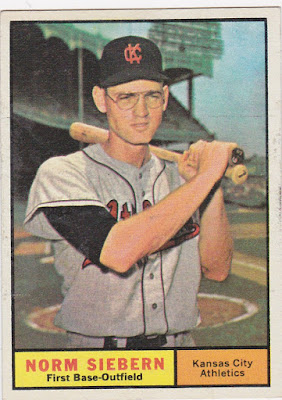 Mack Jones was second only to Rusty Staub in popularity with the expansion Expos in 1969. I'm a sucker for Braves cards that feature that cap prominently. 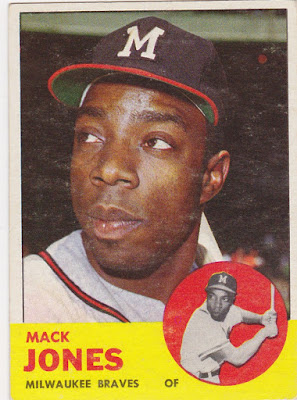 Wrapping up with three more '71s. I picked these up strictly for the uniforms that are showcased. Jim Gosger had a long career as a spare outfielder who occasionally was able to grab a starting spot and hold it for awhile. He had an eventful 1969 season. He began it with the Seattle Pilots and his time with them was immortalized in Jim Bouton's Ball Four. Gosger had a great line in the book which I won't spend any time on here.

He was dealt to the Mets that September and played a bit for the Series-bound club down the stretch. He was not eligible to play in the Series but the Mets voted him a share of their winnings amounting to $100.

I believe that the first non-Orioles cap I ever bought was a replica of the iconic Expos one that Gosger is wearing. BTW...I found out thru some googling that Gosger has an interesting Facebook feed. I looked at it briefly and saw that the guy really likes 70's music. For whatever that's worth. 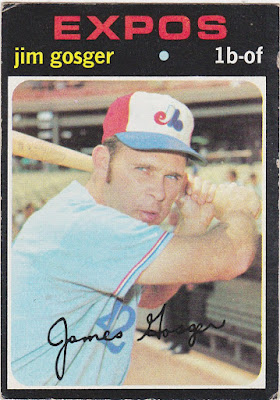 These last two 71's are here simply for the awesome green and gold A's ensemble.

I don't remember how I felt about these uniforms back then. I probably hated them. But now I find them to be very sweet. Sal Bando certainly wears it well. 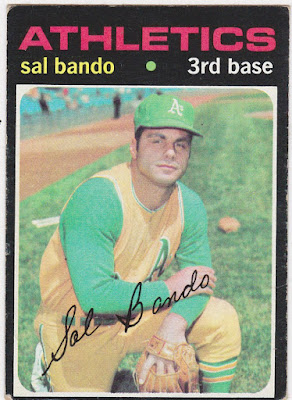 The Dick Green card is seriously miscut. And scanned at a slight angle. But I'm posting it anyway. 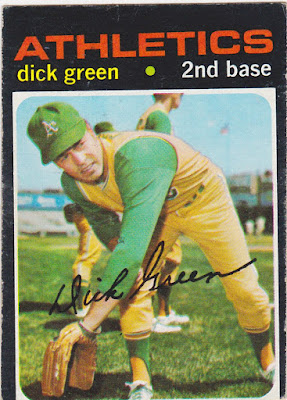 One more collection of card show vintage coming up later this week.
Posted by Commishbob at 7:30 PM