I spent a few hours on Saturday at the monthly hotel show just north of Houston. I shot the breeze with Daryl, the promoter who also mans a table of nice vintage stuff. I usually spend my money with him but on Saturday I checked out another regular dealer's cards. That guy had a nice box of vintage marked fifty cants a card or three for a buck. I think I spent $8. Here is some of what I came home with. 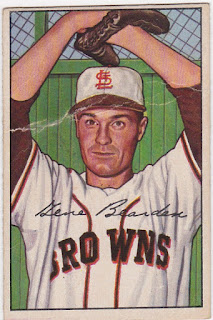 1952 Bowman Gene Bearden. That old Brownies' gear is pretty sweet.  This copy is just a bit less than a perfect 10 but hey, for 33 cents I'll take it. BTW... Bearden survived the sinking of his ship, the cruiser USS Helena by the Japanese during WWII. 168 of his 900 shipmates didn't. 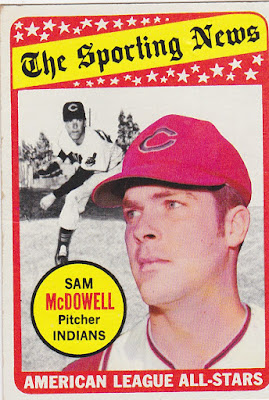 1969 All Star 'Sudden' Sam McDowell. I got an up-close look at McDowell's impressive arm one day at Yankee Stadium in the summer of 1970 by sitting behind the Indian's dugout with a friend. We knew a friendly usher who always found us unused seats at mid-week games. We were dutifully impressed with how hard McDowell threw. 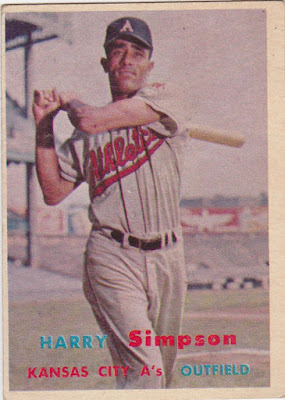 Here is the first of a couple of 1957's. I enjoyed discovering Harry 'Suitcase' Simpson when I researched his 1959 Topps card. That's when I learned that he didn't get that nickname from his many team-to-team moves through the years. 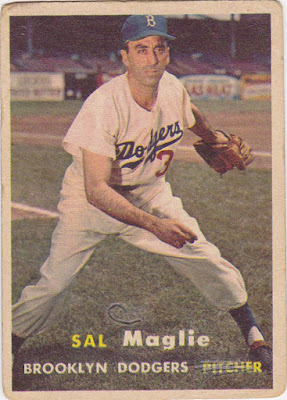 I grab any cheap '57 Dodger that shows Ebbets Field in the background. Even one like this that was on the receiving end of some creative editing somewhere along the way. Sal Maglie's nickname was 'The Barber', earned for his habit of moving hitters off the plate with high and inside pitches.

Maglie is the only guy to pitch for the Giants, Dodgers and Yankees when they were all New York franchises. 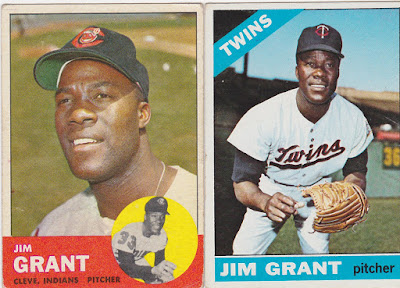 Next up are a pair of Jim 'Mudcat' Grant cards. Three cool nicknames in a row is just a coincidence. Grant was an interesting guy and an underrated pitcher. He was known for his musical chops and Topps frequently referred to them on the back of his cards.

I remember watching Game Six of the 1965 World Series on the TV in my 8th grade classroom in Nutley, NJ. The nuns at St. Mary's always had us watch the Series on the black and white TVs each classroom had on a tall, wheeled cart. In that Game Six Grant pitched brilliantly and homered to boot. The Dodgers were my NL team back them so I was disappointed but most of the kids I knew were AL fans (thanks, Yankees). Grant's SABR bio is well worth the 10 minute read. 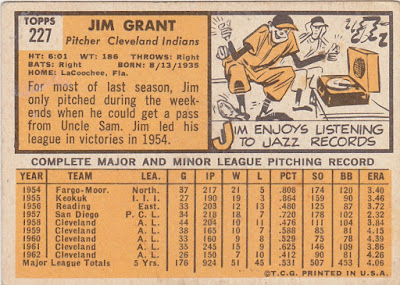 Speaking of the Yankees.... 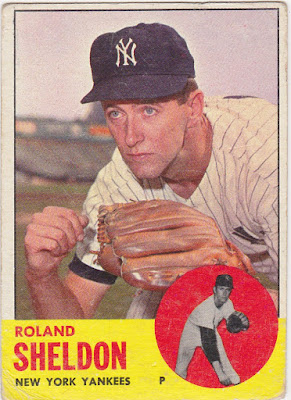 I'm sure I had both of these cards back in the day but I don't remember either one. I'm also sure I saw both of these guys pitch multiple times. I really like the '63 Sheldon. Unusual picture makes it a neat card. 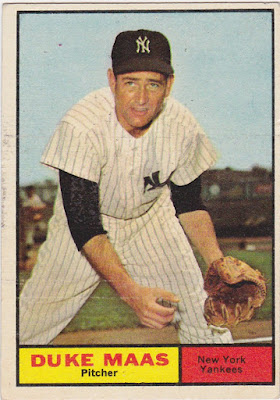 Little known facts about the little known Duke Maas....He was once involved in a trade for Suitcase Simpson...his given name was Duane...he was taken by the Angels in the 1960 expansion draft but was traded back to the Yankees and he died at the age of 47 due to complications of arthritis. 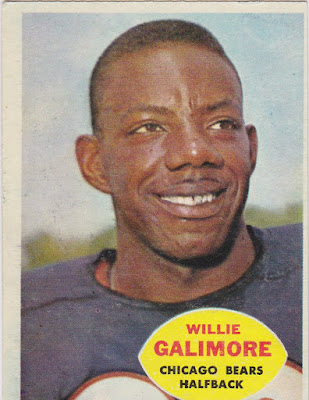 Willie 'The Wisp' Galimore of the Bears died along with a teammate in a one car accident during training camp in July of 1964. Nobody ever talks about Galimore and his numbers won't make your eyes pop but his talent sure did.

This 1960 Topps Galimore was the only non-baseball card I bought Saturday. It's the first Galimore I've had since I was a kid. If I was an NFL runningback I'd want as cool a name as 'Willie Galimore'.

Check out this brief NFL Films feature on Willie the Wisp.

Posted by Commishbob at 9:06 PM