I frequently lament the terrible luck I have in finding Orioles among the new card packs I open. I believe the lack of O's is the hobby gods' way of balancing out the great luck I have at finding cheap vintage at shows.

But I usually come up with the current Orioles cards thanks to boggers who ship them my way through the kindness of their hearts. One such shipment came from Shane who writes one of my favorite blogs, Shoebox Legends.

A couple were from the '17 Heritage set. First up the oft-injured Chris Tillman. If the Birds are to make any noise at all in the AL East CT needs to get back out on the mound and display the 'ace' characteristics he has flashed in the past. 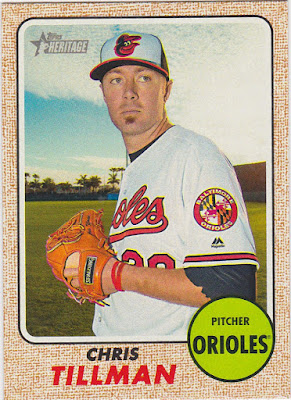 While I'm at it I'm going to state right now that no team has done sleeve patches as well as the Orioles through the years. I think I need to do a post highlighting them soon.

Shane sent me the O's team card as well. The good news..it features the elusive (Topps-wise) Matt Wieters along with slugging stars Manny Machado and Mark Trumbo. The bad news? They are wearing those horrific black softball team jerseys. Oh, and Wieters is now on the Nats. Terrible. #fakenews

I'd love to see the Heritage team cards made with the 'team on the bleachers' style photos of old but they may or may not have access to them and it's possible that teams don't take them nowadays. Googling a couple different ways turned up a few from recent seasons but not as many as I thought it would. 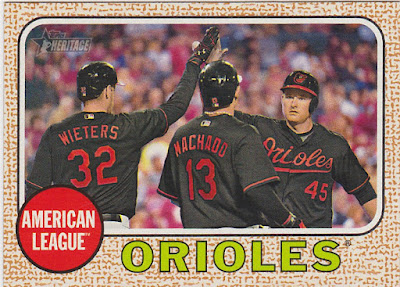 Now with these two, the one I actually pulled last weekend and a few more I picked up here and there I'm at about seven '17 Heritage Orioles.

I also received this '17 flagship Yovani Gallardo. Nice card, it works with the design but again, those jerseys! Sad. Very sad. 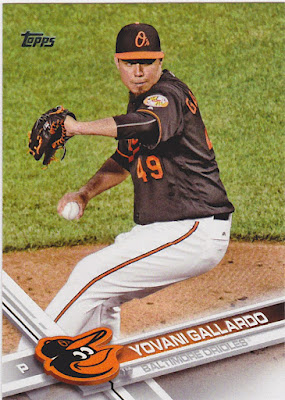 Gallardo came to the O's last season as a free agent signing. He had good numbers in '15 for the Rangers. Orioles paid him $9,000,000 for his six wins. That's 1.5 mil per win. I think I could get my knuckleball going again with a few weeks notice and maybe grab a win with the Orioles lineup behind me. Hell, it was a killer knuckleball 45 years ago, why not now? And I'd take half of that 1.5M for a win. If I made one start and got a win what would my WAR be? Hmmmm.

The O's flipped Gallardo to Seattle for Seth Smith over the winter. He'll probably win the Cy Young this year. 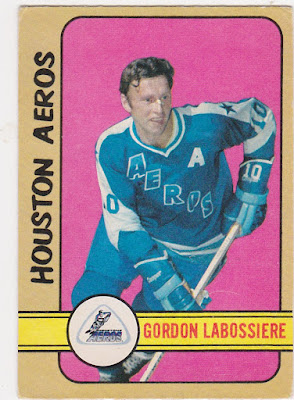 It's the 1972/73 OPC Gord Labossiere. Killer card for an Aeros/Rangers guy like me. I loved the WHA when the Aeros were in their heyday. Labossiere quickly became one of my favorite players, due mostly to the fact that he had a (brief) Rangers history.

I love everything about this card, the pick background and the way he mirrors the player in the Aeros' logo. That almost forgotten first year sweater makes it even more interesting. Shane picked up a second copy as an upgrade and was nice enough to ship this one to me.

I have very few cards from this set. I really need to chase down more. In fact, given the Aeros rather short lifespan and the absence of many cards made for the WHA, I bet I could round up all the mainstream Aeros cards produced. I have a nice stack already. I need to do more research.

Thanks again, Shane. I appreciate your gift and your writing!
Posted by Commishbob at 9:00 AM