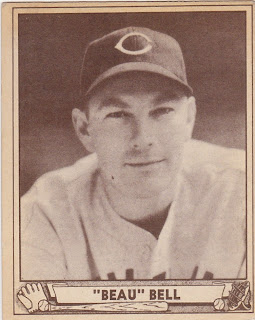 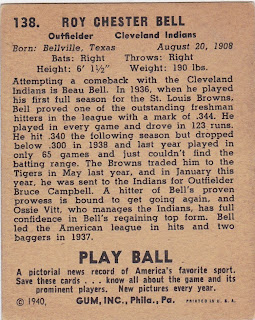 Baseball Reference has always listed Roy "Beau" Bell as a University of Houston alum making it appear that he played there prior to his days at Texas A&M. The only problem with that is that the UH baseball didn't start until at least 1947. Bell might have played club ball while attending UH but he certainly never played at the intercollegiate level.

He ranks third in almost every stat category among pro players listed as UH alums according to BR. He's behind Tom Pacoriek and Micheal Bourn.

I wasn't aware of this when I added Bell to my Houston alum collection. But it's no big deal. I'm happy to add another Play Ball card to my collection. They don't get much love on the blogs. I think the black and white format and the humdrum card backs probably account for that.

Bell played seven years in the American League from 1935 through 1941. He played primarily for the Browns but spent time with the Tigers and Indians as well. His best seasons were 1936 and 1937. He hit over .340 both years and he led the league in hits and doubles in '37 while making his only All Star team.

In addition to this card Bell appeared on at least one Detroit regional issue and on a Wheaties panel.

Posted by Commishbob at 8:06 PM